View updates to this DSM profile...

I finally got a good picture of the modified clutch pedal clevis on my car.
This was done by English Racing in 2016.
They did a really nice job of welding a nut to the forward face of the clevis. Beautiful little weld.
I've only seen this with my cell phone camera. Have never been able to get my head into a position to see it like this.
Marked it up -
Blue arrow is the nut they added
Red arrow is just pointing to the weld.
They put it on the invoice like this:
"Once installed new motor with new clutch there was not
enough travel on the clutch adjustment. Had to pull out the
clutch pedal assembly and add a nut to the clevis."
$400 plus tax 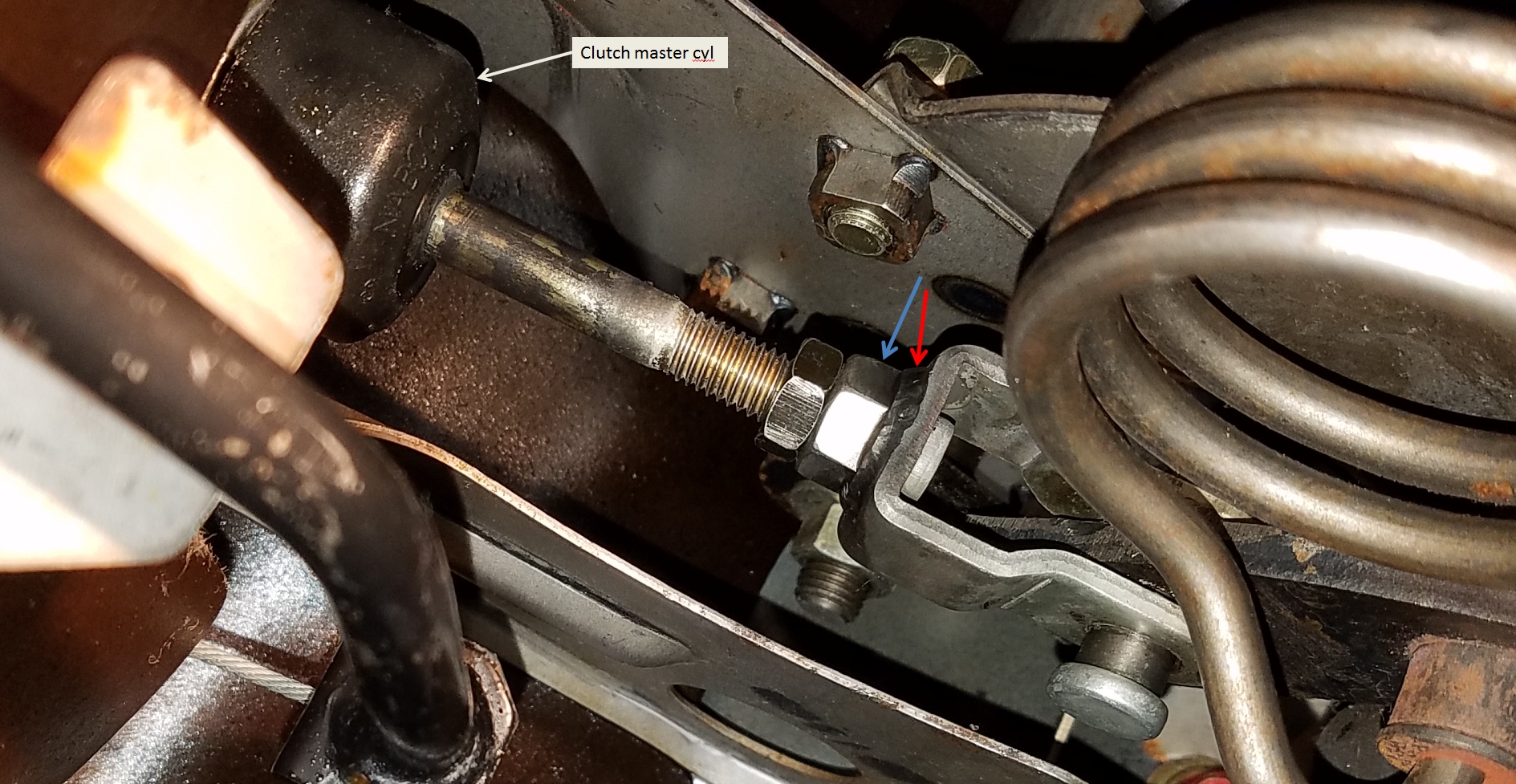 Took the time to get some good pics of this Quarter Master twin disc clutch with blue spring, from TMZ.
It's an 8-leg, "gear drive", Street friction material, Street flywheel for 6-bolt, hub for 1" x 23 spline input shaft.
And a blue spring, which is nominally 2500 - 2700 pounds rated. The color code is one finger painted blue.

The spring in mine, they are calling it 2550 pounds.
Which is pretty cool because I had also thought about getting the grey spring which is the next one lighter.

Right now I'm waiting to get my car to English Racing for the install. 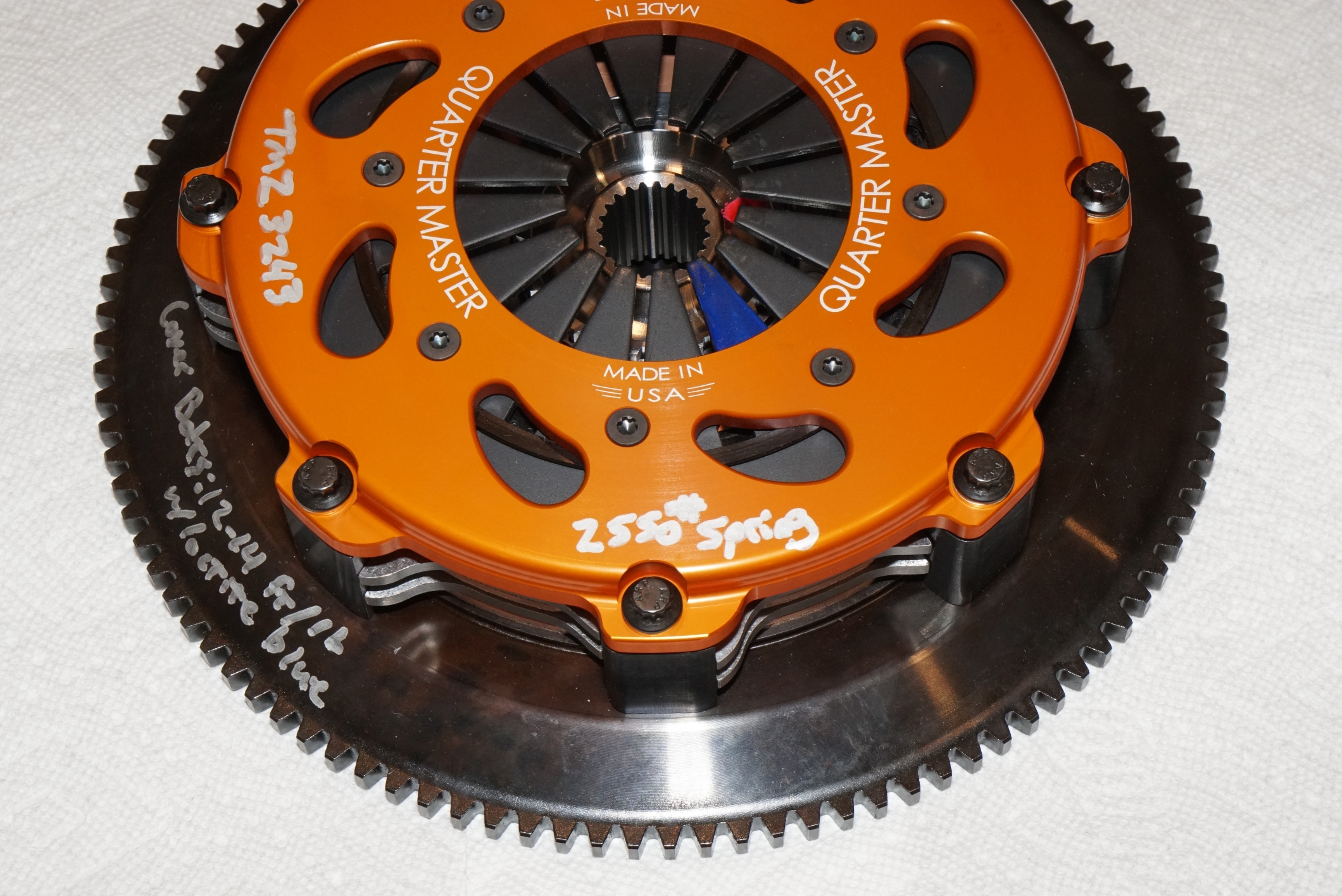 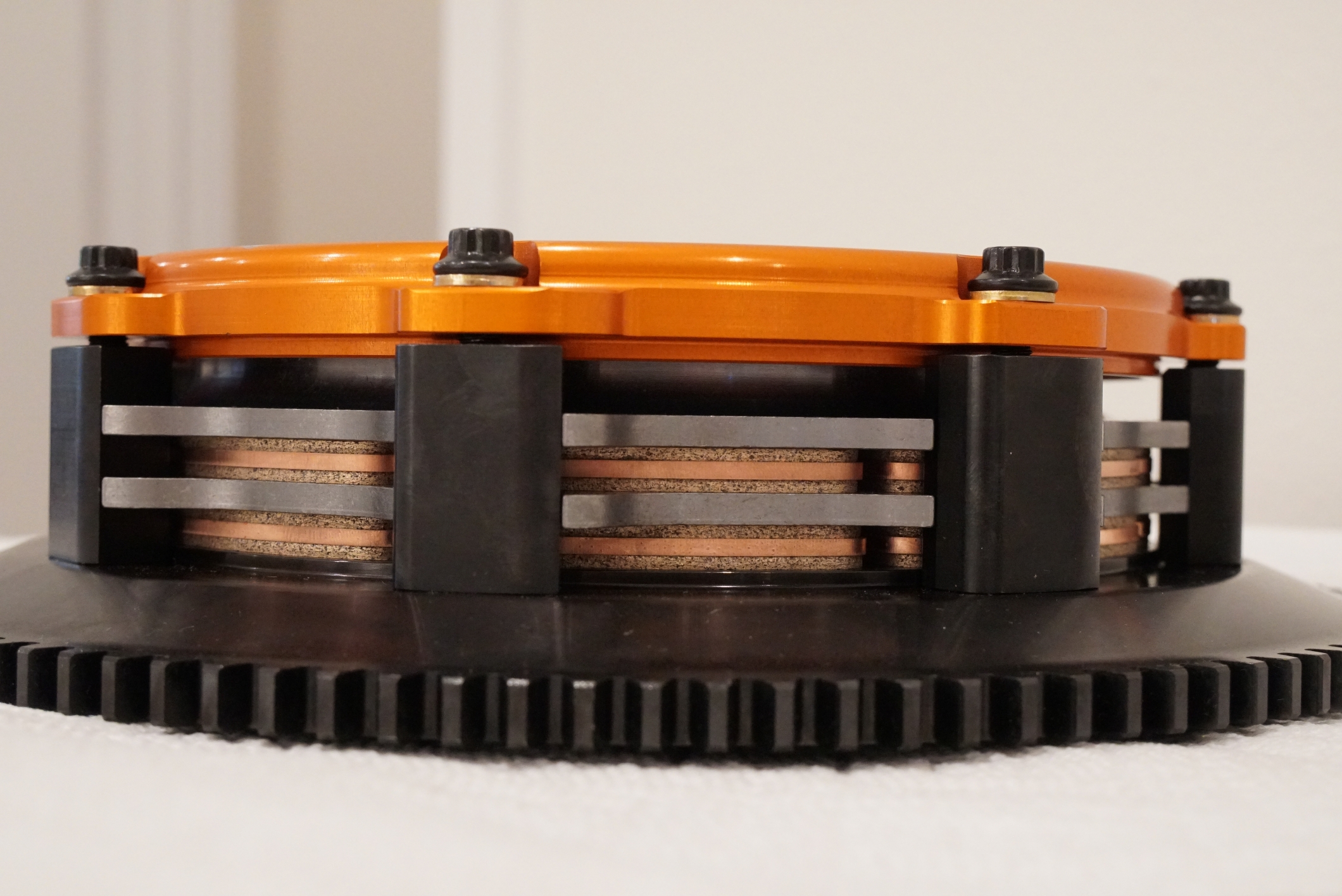 In this last pic, if you look between the fingers you can just barely see the splines that are the drive from the discs to the hub. Those splines have an OD of about 2.5 inches.

Can you purchase the 6 leg version with the lighter springs or is just the 8 leg? How do you like the clutch so far?
Jeremy

1cleangsx said:
Can you purchase the 6 leg version with the lighter springs or is just the 8 leg? How do you like the clutch so far?
Click to expand...

I think you can get the 6-leg with lighter springs, but Tim would be the one to know that.
I've been trying to get my car in to English Racing for the install ever since Jan 19 and am still waiting for them to come and get my car. Myles has been telling me end of Feb/early March is probably when they can start.
So anyway, I don't have it in the car yet.

I was a little skeptical that Quarter Master would even send the clutch out with the spring we ordered.
So the way we did it, Tim ordered the clutch assembly sent to him first. That way he can check it all over, make sure it is the right stuff.
Tim ordered from QM on Dec 21, 2020, and he got it Jan 12. So it didn't take very long.
Then he gathered up the bolts and TOB and other stuff I had ordered and sent it all out to me a few days later.

I had gotten a copy of the QM spring chart long before all of this, but the chart all by itself doesn't do you much good unless you have some numbers to relate it to engine torque. So that is something that Tim and I discussed by email. Along in there Tim told me that John Freund is one of his customers using an 8-leg with a blue spring, so I had some conversations with John about it. He seems to like his clutch pretty well.
Last edited: Feb 24, 2021

That is the clutch I’m going with this year for my build, but as recommended by Kurt @bastarddsm , I want to run the lightest spring possible on the street version like you have. I’ll buy either version, other than the lighter springs I’m not sure as to why buy the 8 leg over the 6 leg other than price obviously. The evo guys seem to prefer the 8 leg, but anyways I hope that set up works out for you

1cleangsx said:
Can you purchase the 6 leg version with the lighter springs or is just the 8 leg?
Click to expand...

Most of DSM related shops sell the clutch kit with a white spring on either a 6 or 8 leg kit which is the highest pressure and the sale page normally doesn't allow you to select the spring color. So just tell the vendor that you want a lighter spring before placing the order.
Hiroshi
90 GSX Manual
98 GSX Auto

Exactly why I’ll go thru tmz, thank you

1cleangsx said:
I’m not sure as to why buy the 8 leg over the 6 leg other than price obviously. The evo guys seem to prefer the 8 leg, but anyways I hope that set up works out for you

I didn't have much to go on either, for 6-leg vs 8-leg. But of the comments I've seen by users, the more favorable ones seem to come from 8-leg users.

Since it will be a while before I have my own opinion about it, I'll post here some comments I got from people in private messages with 4 users of a QM twin. Only one is a 6-leg user, the other 3 users have 8-leg.

The 6-leg user doesn't like it very much, because of chatter and sudden on-off engagement. He thought I should try an 8-leg if I wanted to try one at all.

The 8-leg users' comments, one of them I won't relate because his is a race version. But if the race version is what you want, this guy would be interesting to talk to because he has put 15,000 miles on his! He is user "TWOpointFORliter".

The other two:
#1: (Babyviper) “There is a break-in period that sucks with this clutch. Doesn't want to slip at all. But after a dyno session and about 100 miles she is all good. It's definitely daily drivable now, you can slip it as well. I can take off at idle speed like stock clutch. It was not like that for the first 100 miles. Still makes noise at idle and louder when clutch is depressed.”

#2 (John Freund) Talking about street manners. John said “They're not bad for driving but you will still stall things out more often, and hill starting is a bit of a bi***. I basically overrev a bit and don't freak out about slipping the clutch at a higher rpm than other clutches.”
I said “Yeah, starting uphill is where I have some trouble even with my ceramic single disc clutch. That's what I do, hold revs to at least 3,000 and try to feather it in slowly.”
John said “Eh I think 3,000 is pushing it. I'm talking like starting from 2,000 at most. Just takes getting used to it. It's very light on the pedal pressure. Pedal feels nice.”

If you think you would want a triple disc for whatever reason, talk to Hiroshi (DSMPT).
That guy knows so much and is so helpful!
The reason I could think of would be, 50% more torque capacity per pound of spring. If you know what I mean.
Last edited: Feb 25, 2021

We're on Boost said:
I didn't have much to go on either, for 6-leg vs 8-leg. But of the comments I've seen by users, the more favorable ones seem to come from 8-leg users.
Click to expand...

Just curious, how much HP you pushing or looking to push as your goal..

ChessmoDSM said:
Just curious, how much HP you pushing or looking to push as your goal..
Click to expand...

Well that's easy to answer because my engine is done and dynoed and I'm not ever going to be looking for more power. Take a look at the "Photos" in my profile, there is a dynojet chart there that shows hp, torque, boost, and A/F. In the title at the top you can see where, when, turbo, correction factor, gear, ethanol percent, and smoothing factor. This was the final tuning run that Aaron did after my engine was finished in 2016. A few days later Lucas did some minor tweaking on the tune to get rid of that little flat spot that you see around 3,700 rpm.

I like this engine a lot. My joke about it with Myles at ER is that it will probably last longer than I do. I'm going to try to make that happen. That is actually my goal

. Usually I am running it at lower boost though, than what you see in this chart, and lots of variation in the ethanol %.

1990 Eagle Talon TSi AWD
You must log in or register to reply here.