Tanro said:
I wonder if there is any possibility of mounting a 2gb boomerang to a spyder?
Click to expand...

I don't think theres a clean option because of how it mounts with a center support and two wide supports. I want to say I have seen one before on a spyder but wasn't a fan.

I'm planning to get a carbon trunk in the future with the small lip on it and I think that'll give the rear end enough of a pop.
2GB AWD Talon Spyder

Tanro said:
I wonder if there is any possibility of mounting a 2gb boomerang to a spyder?
Click to expand...

There's not a way to do it that replicates the look of the coupe. The sides of the boomerang spoiler mount next to the rear glass, which is much farther up the body than the Spyder trunk will accommodate.
Duncan
97 GST Spyder

Had a new catback section put in yesterday got a steal from a good friend on a Megan exhaust, very happy with how it turned out!

Doubleot said:
I don't think theres a clean option because of how it mounts with a center support and two wide supports. I want to say I have seen one before on a spyder but wasn't a fan.

I'm planning to get a carbon trunk in the future with the small lip on it and I think that'll give the rear end enough of a pop.
Click to expand...

Wish I could see a pic of that... But oh well. I love the idea of a 2gb talon spyder. But I also love the boomerang.
1999 Eclipse GS-T Street Warrior

Tanro said:
Wish I could see a pic of that... But oh well. I love the idea of a 2gb talon spyder. But I also love the boomerang.
Click to expand...

Theres no way to mount the thong spoiler on a spyder, I was thinking of Tom's Awd spyder and his had the Gsx high rise spoiler on it.

I'm not sure it would look good even if it could be mounted on the spyder so I'm not worried about it.
2GB AWD Talon Spyder

Took her out this weekend! First car show!

Wow, it's been a hot minute since I updated this thread! I took her out to a cars and coffee meet up a few weeks ago 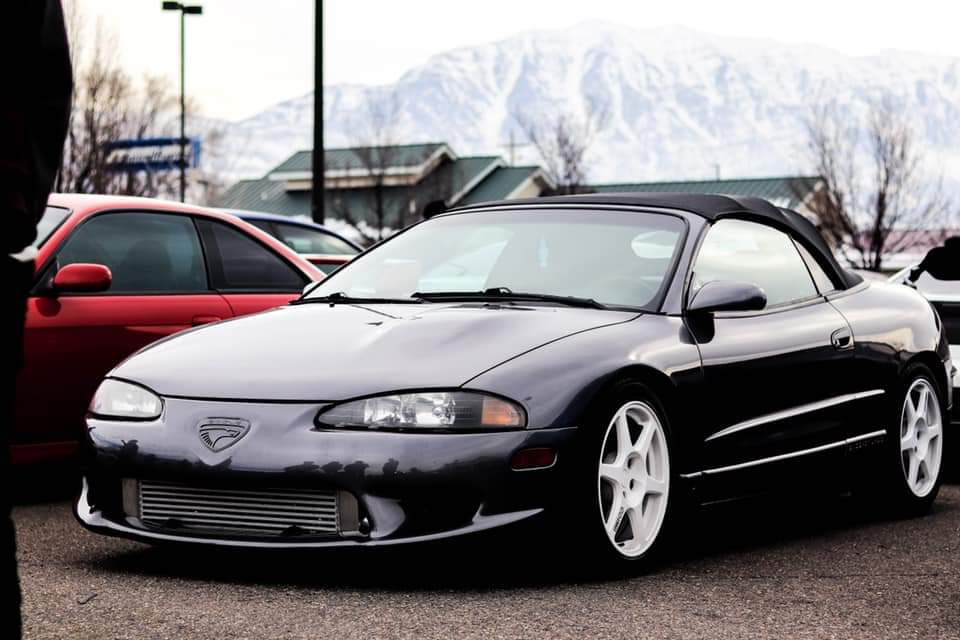 Had a good time with everyone and it was nice to drive her around.

I also just recently ordered a new top assembly from Stevie Miller should be here any day now and I'm excited to finally replace mine.

Other than that pretty much nothing else. I've moved her around a couple of times in the garage.

I'll continue to update as warm weather starts coming through and also documenting the top assembly removal and install.

Well hot-goddamn, might I say you've done some mighty fine work to that car. Truly a massive turnaround from what it used to be to what it is now. This just really does look great as a convertible. I have no idea why Eagle/DSM did not offer it as a factory package.

Straight 5 out of 5 from me!
-Stefan
I like to give info that nobody asked for.

Kryndon said:
Well hot-goddamn, might I say you've done some mighty fine work to that car. Truly a massive turnaround from what it used to be to what it is now. This just really does look great as a convertible. I have no idea why Eagle/DSM did not offer it as a factory package.

Thanks for the kind words man, I very much appreciate it!
2GB AWD Talon Spyder

Hello! Got my replacement top from Miller Import Parts! Couldn't be happier with the quality of this new replacement top! Here's a few recap pictures of my old top

As you can see my attempt at doing the top last year didn't go very well, I pulled the front too tight and it caused the rear bow to stick out. I wasn't able to Install that rear trim piece back on and it really bothered me.

I'm glad to have gotten a great deal on the replacement top and actually got it installed yesterday, I'm about 75% done putting everything back together just needed a little more time. I'll have pictures of the new top all around next time I post an update!

All done! Everything worked out great! I'm so stoked to have this top! Here's a teaser pic, it's just dirty and dusty I need some decent weather to give her a full wash!

Did a quick little video walk around after washing and registering the Spyder for another year! Couldn't be happier with this new top!

Whats up guys and gals!
I recently realized I was having a little bit of coolant seep out of the lower radiator hose. I already had new OEM hoses and I figured why not just upgrade my radiator at the same time!

I'll be a kind of test dummy here but I ordered a cheap dual core off Ebay considering I've heard a ton of people have good luck with them. Only time will tell if this was a good or bad idea

this particular one is from a company called DNA motorsports. 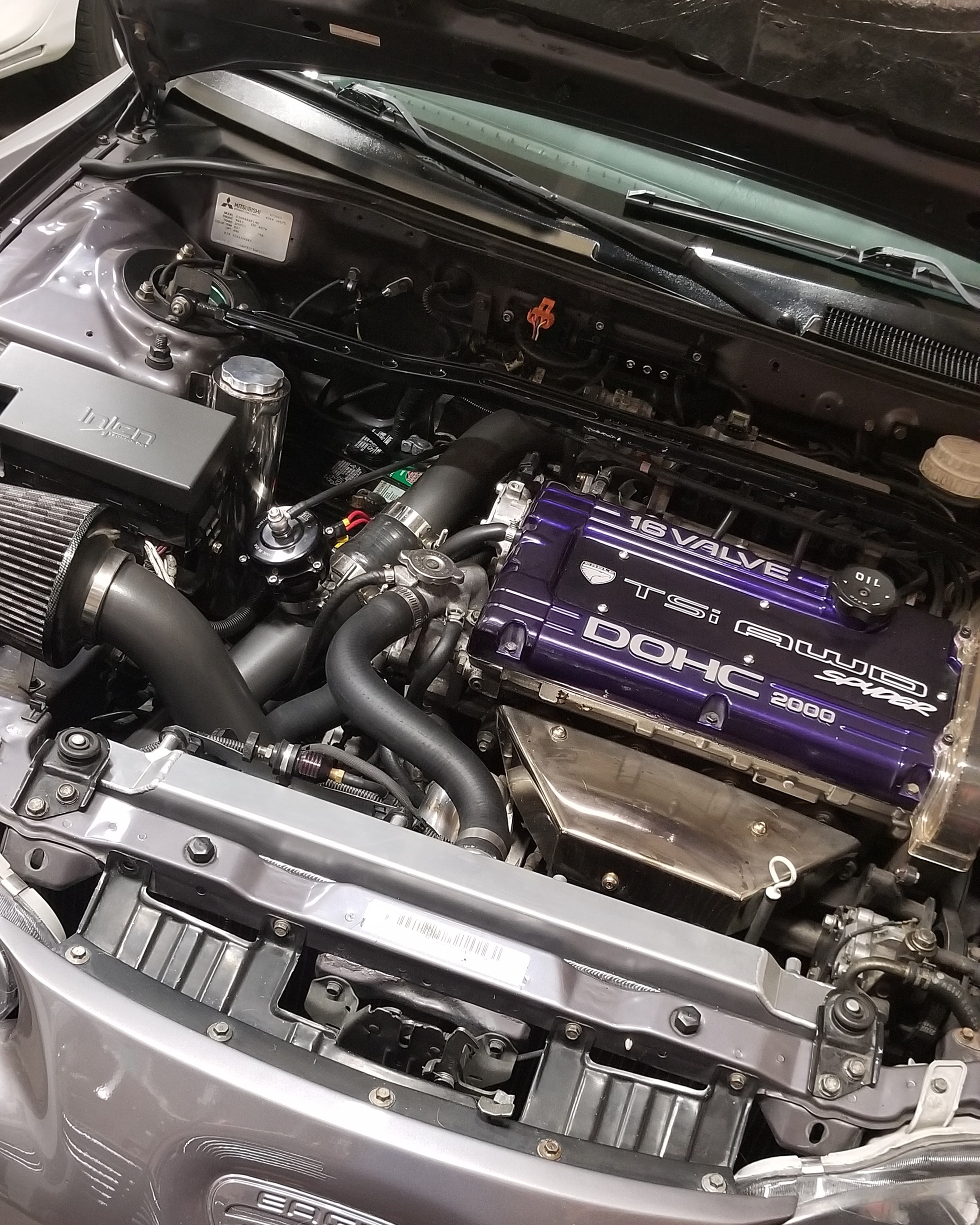 It actually fit better decently too. We burped it properly and waited until it got to temp and pressurized to make sure there was no leaks. So far so good! It makes the bay look a bit cleaner too!

Well took her to a show here in Utah this past Saturday and ended up winning an award! 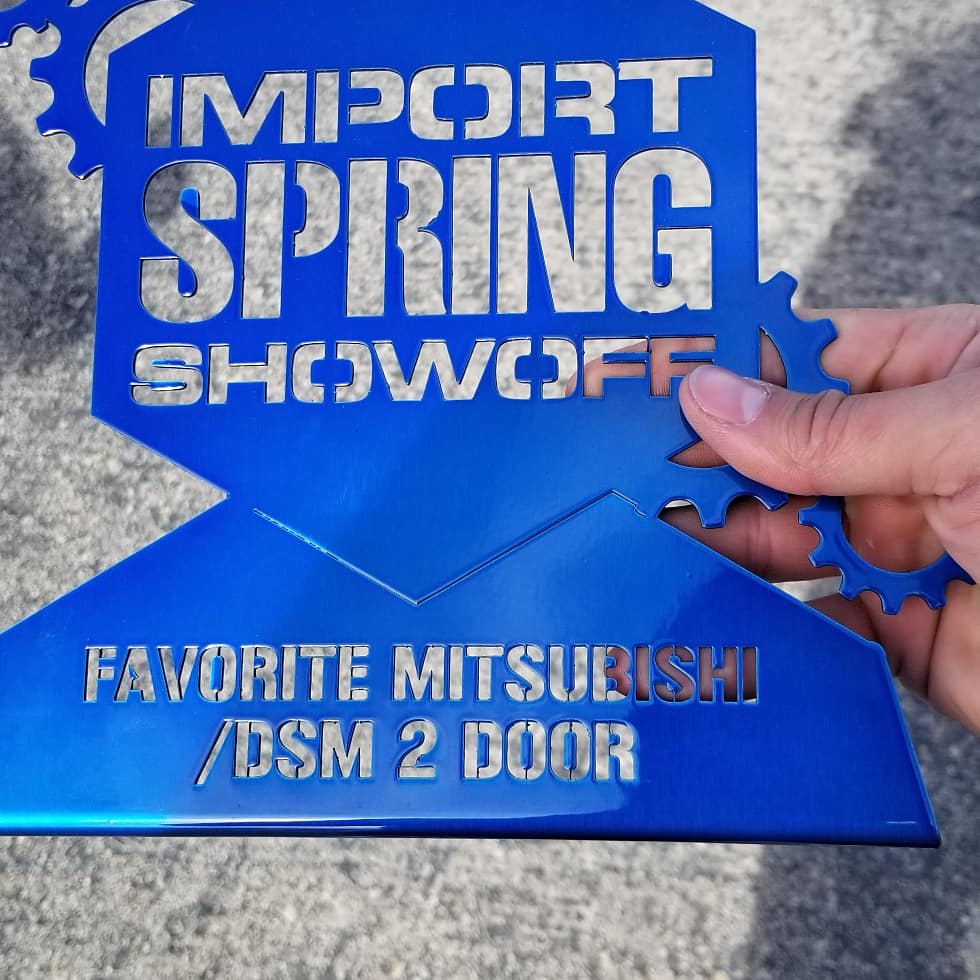 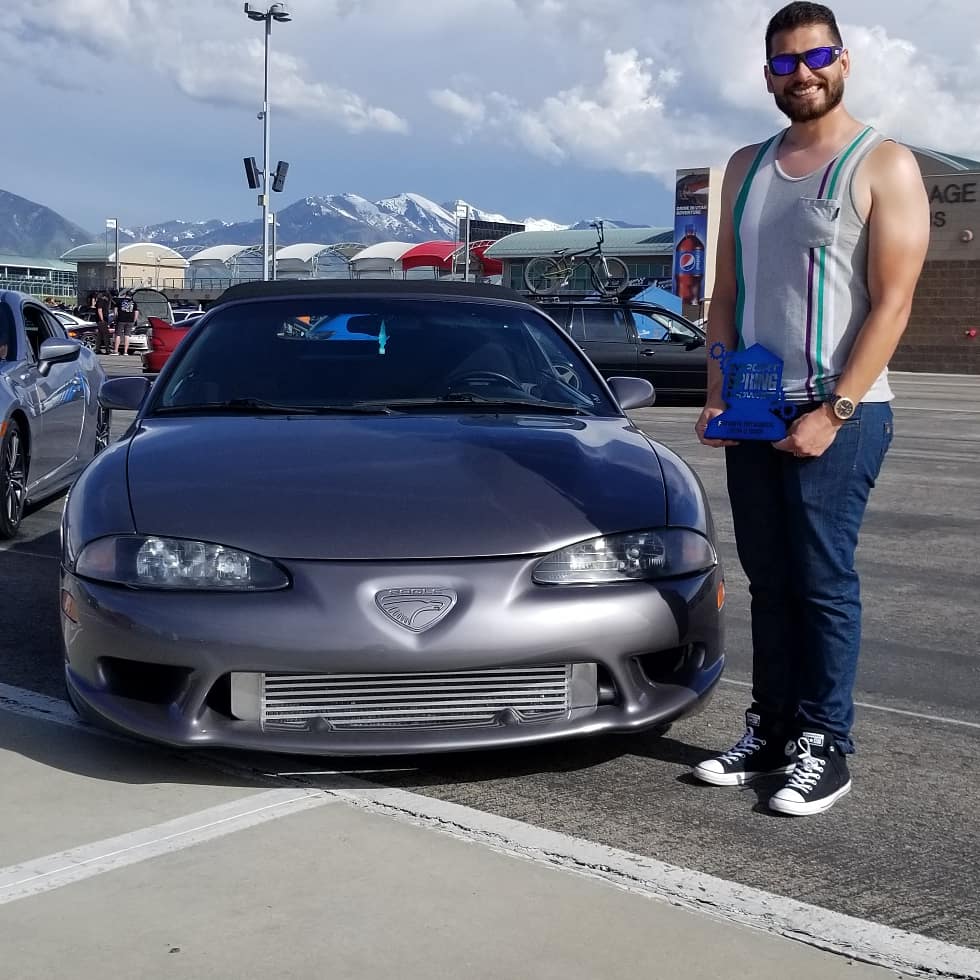 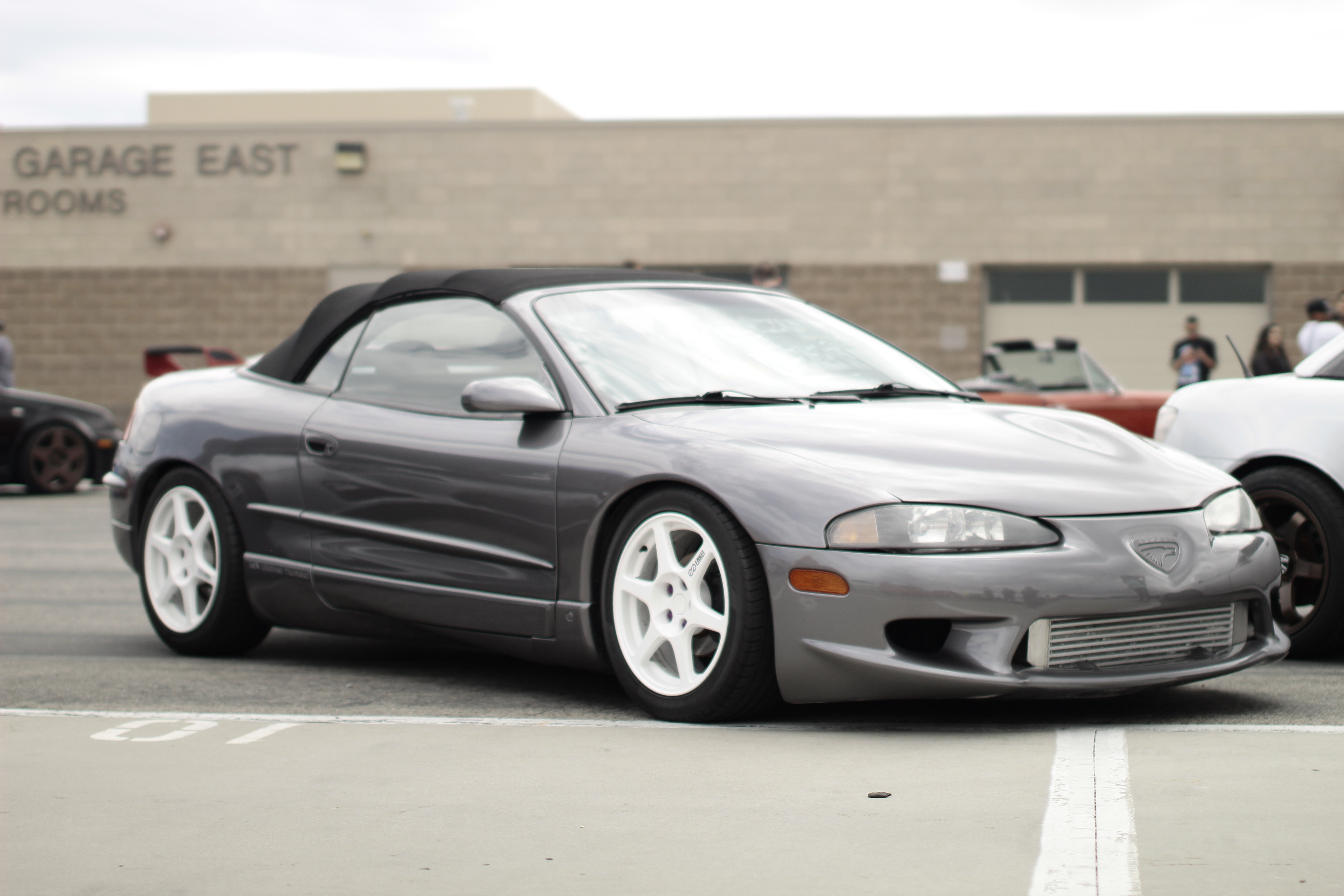 Thank you! Means a lot

Pretty rare for people to actually know that spyders were never available in Awd. I had a small poster board showing various stages of my build including a sheet detailing my work and modifications. Was also cool to hear from a judge that he follows my build on Instagram and my Facebook page.
2GB AWD Talon Spyder

Hello dsm family! It's been a while but I'm still around

Havent done a ton of work on the spyder been actually enjoying her this summer and now fall. I did pick up a chromoly north south bar from Justin Mohney who owns detective coatings for a great deal but have yet to install it because I didnt have the necessary bolts.

it's going to be a bit of weight reduction to say the least and was already powder coated my favorite color.

I also had a friend do a photo shoot at on of our local mountain parks and the shots turned out amazing! 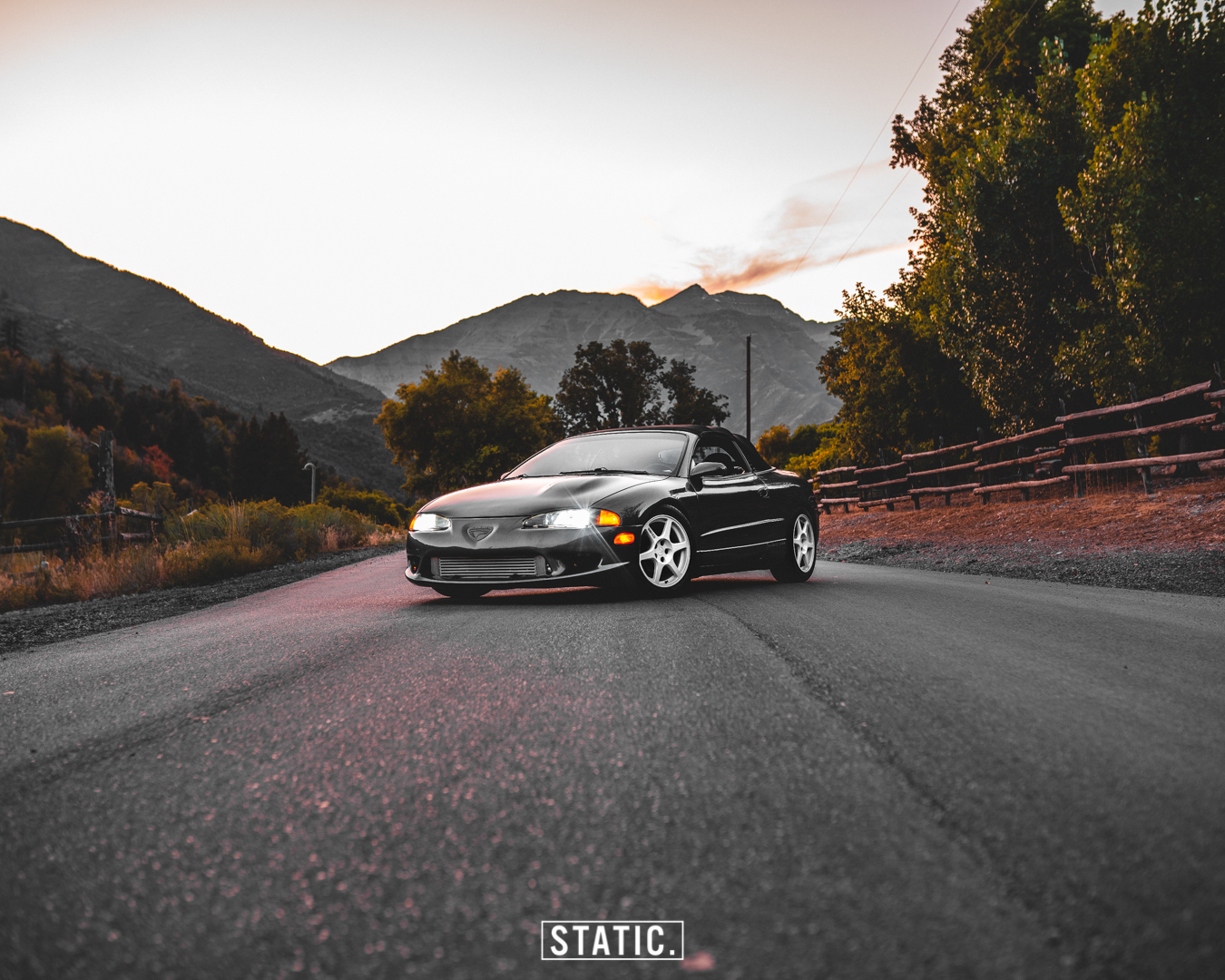 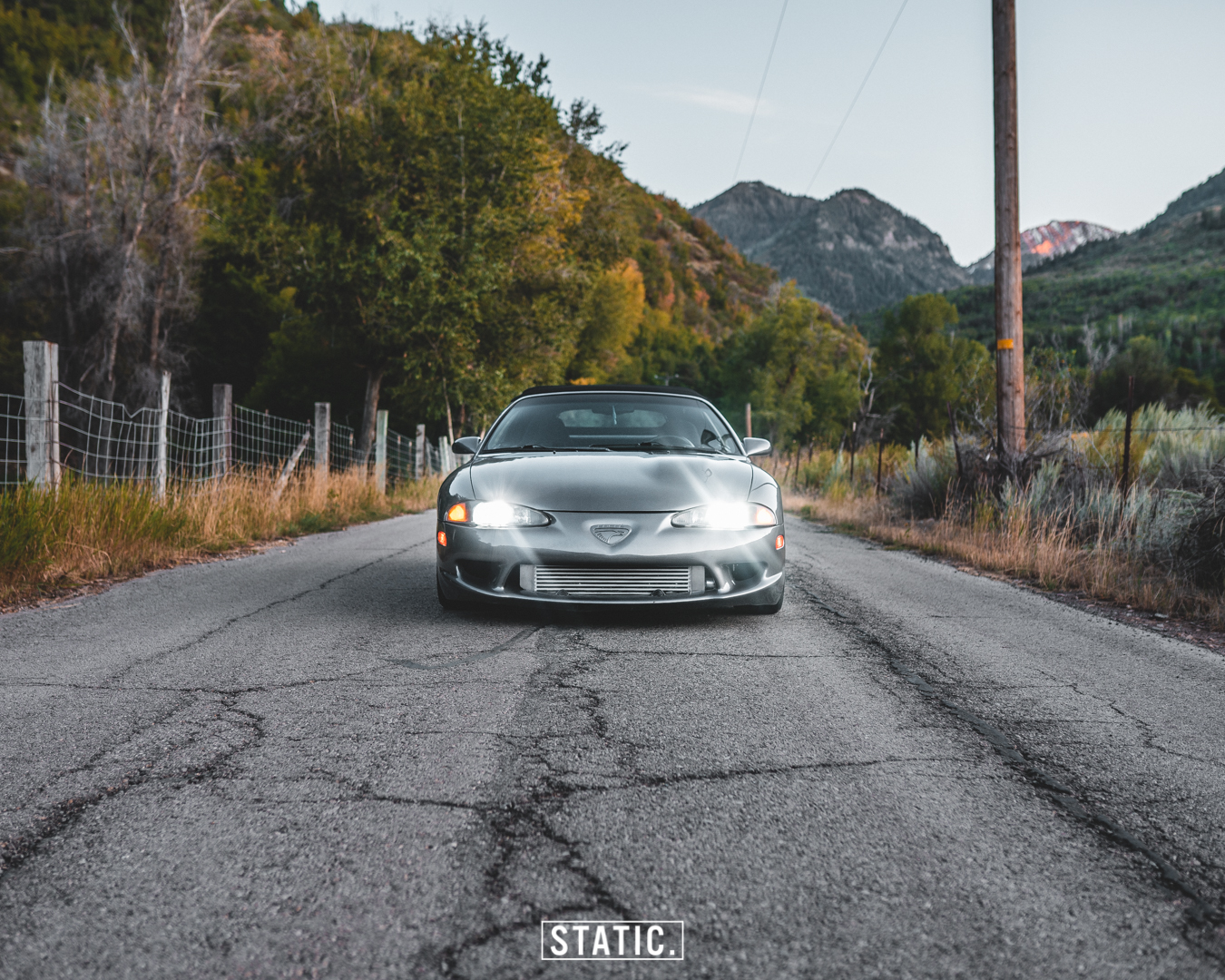 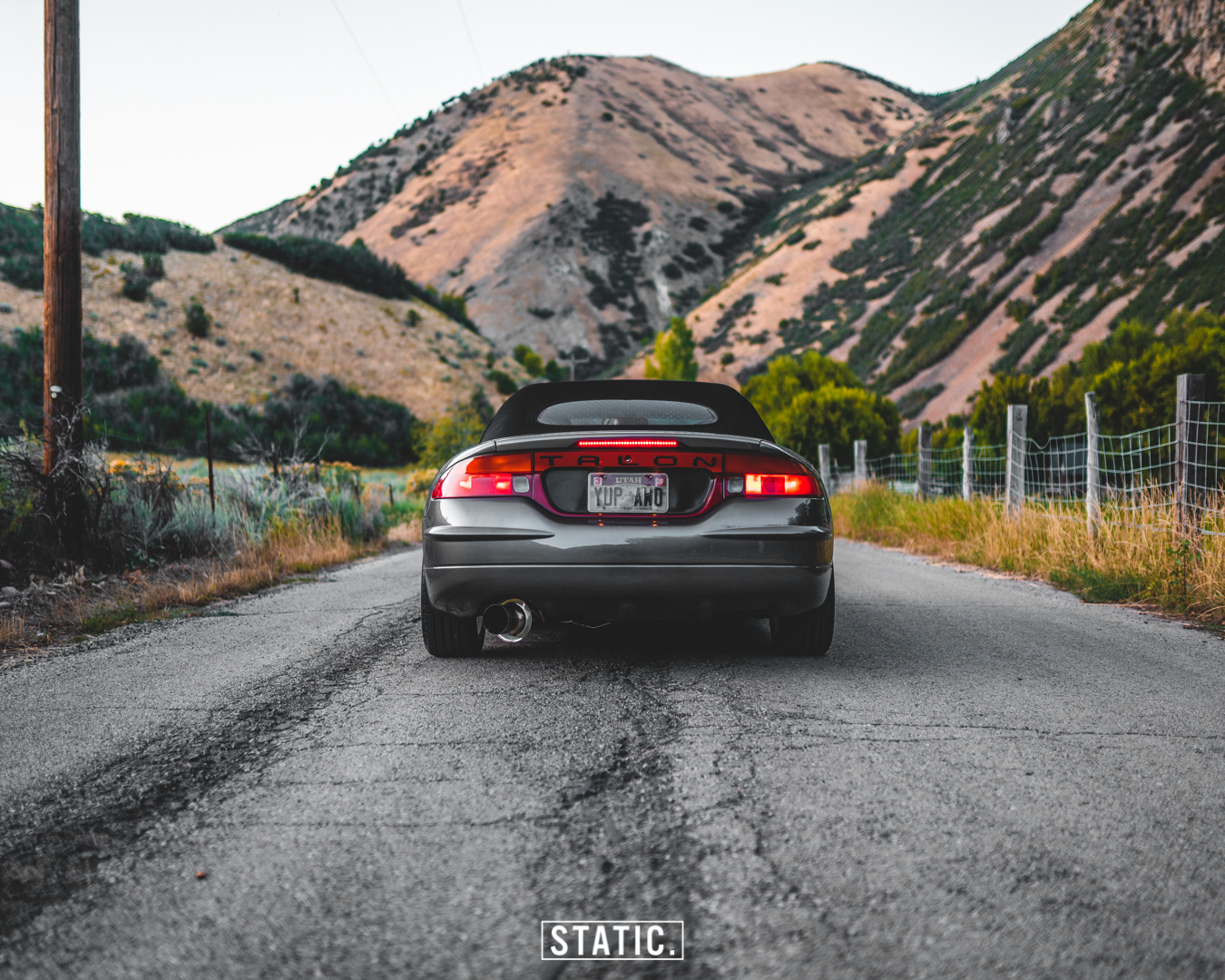 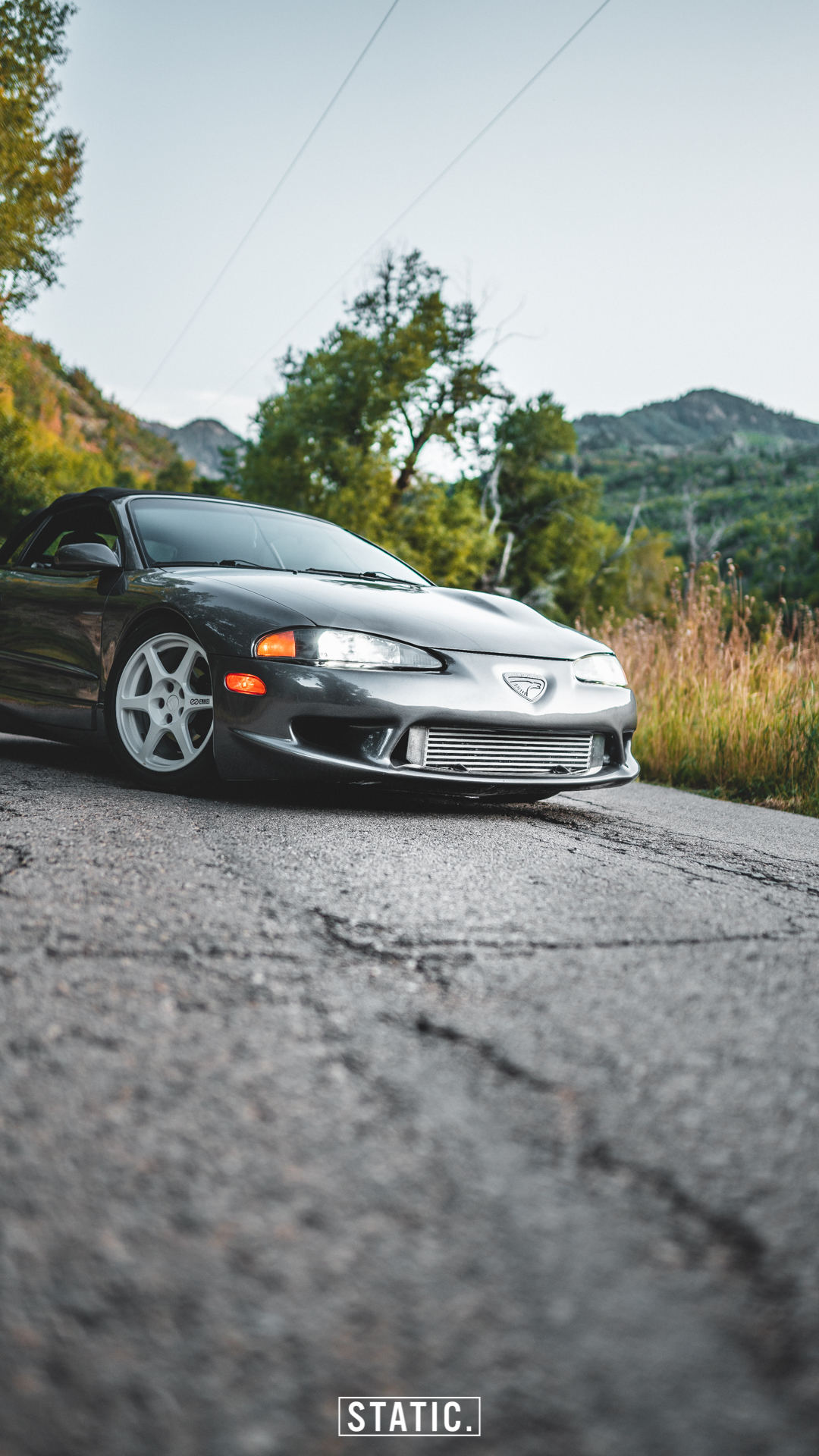 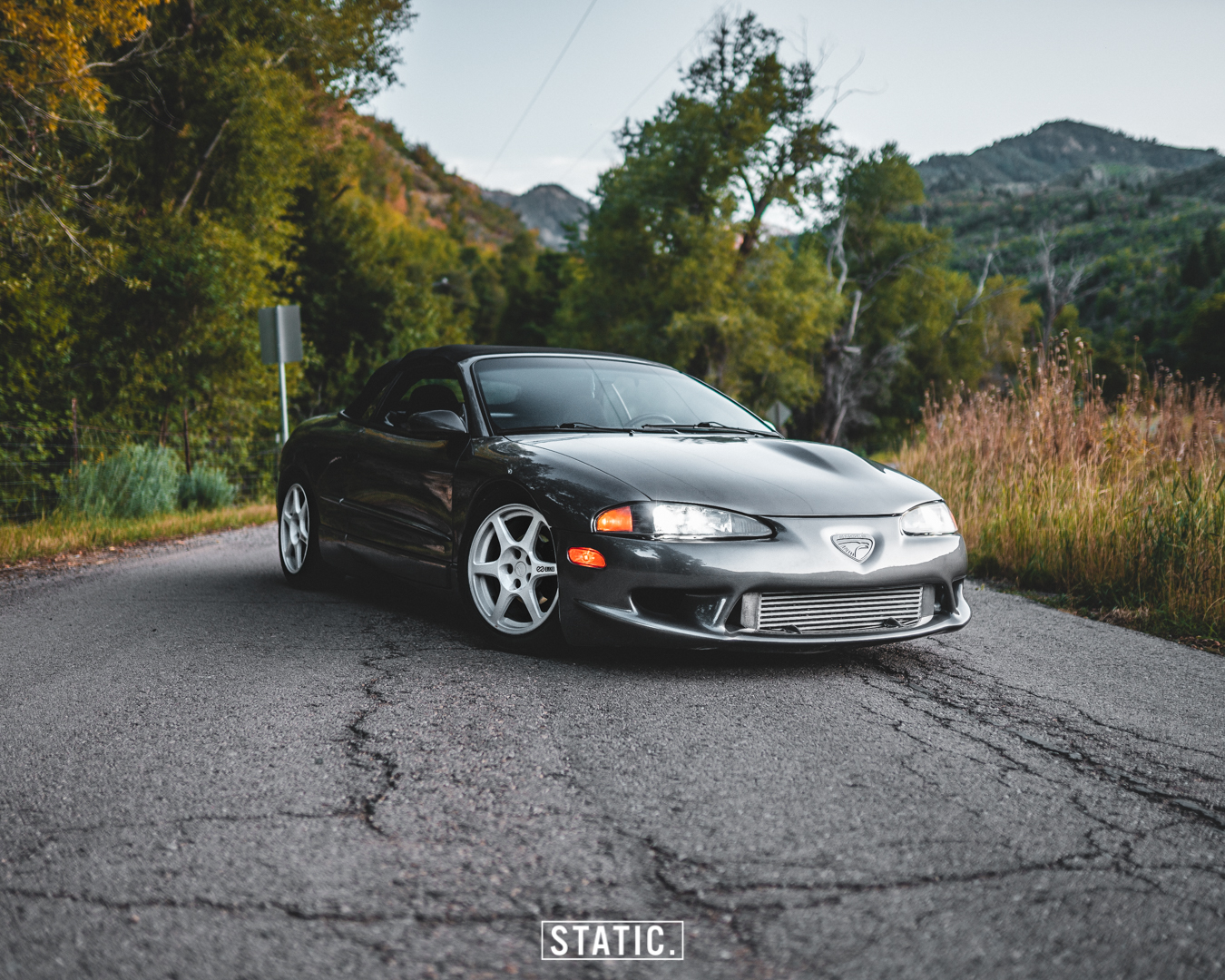 Hello friends! Sad to say I had a Carbon CSL Trunk on order from Carbonetics but things have gone sour quick.
Hate to bring this back up but after the run around from Sergio, I filed a dispute with PayPal. Promised my Spyder CSL carbon hatch in 8-12 weeks. That ship has sailed. I placed my deposit July 3rd 2019 checked in with him once in a while and he said it was actually ahead of schedule and he would ship it closer to mid October. Great still not within time frame but at least he was talking to me.

Last Friday he said it was ready to ship and he sent me the remaining balance on my invoice. I paid it and was expecting tracking info. Never happened. I called him yesterday and he apologized because he was at WCF and said it had either already shipped or it would ship 100% yesterday. He claimed my part was finished and ready to ship, and promised I would have tracking by the end of the day. That came and went and didnt hear a thing. Messaged him last night and asked if there was any issues. Never got a reply.

I just want my money back at this point, I wasn't about to wait until it was too late to file a dispute for a refund with PayPal so let's see what comes of this. I'd 100% rather have the trunk because it's an awesome part and looks incredible but man, I don't like being lied to.
2GB AWD Talon Spyder

Some where in, Colorado

This is sad. I want the full talon lip kit from him, but don't want to deal with the bullshit everyone else goes through. Such a dis-service to offer awesome parts and not have good customer support.
Last edited: Mar 4, 2021
-Tom

I was so excited to get my trunk, I've been in contact with him today. Hoping to either see my trunk getting shipped or my refund processed. I'll be happy with either but won't be happy till one or the other happens. I'm bummed I love his parts and know he makes good quality things but his customer service needs some serious work.
2GB AWD Talon Spyder

1998 Mitsubishi Eclipse Spyder GST
Street Build
You must log in or register to reply here.