So I did some thinking last night and I really want to buy a spare long block and build it for a pretty high HP goal. A friend of mine is running a holset hx52 on his single turbo 3000gt vr-4 and it sounds absolutely ridiculous. Literally like a semi truck (wonder why

) anyway I've heard of some dsmers running a hx52 for some high HP builds and I think it would be awesome to do a hx52 setup sometime down the line. My rough plan to start all this is to buy a long block, buy a new rotating assembly from STM(stroker bottom end), build the head to a desirable state to my power goal, then just keep it on the motor stand and buy everything as I get to it. All the small stuff too: bolts, gaskets, misc hardware, pulleys, everything all new parts. I've always wanted to do something like this but never had a good enough financial situation to do so but now I think I'm ready! If anybody has insight on a hx52 setup feel free to dm me 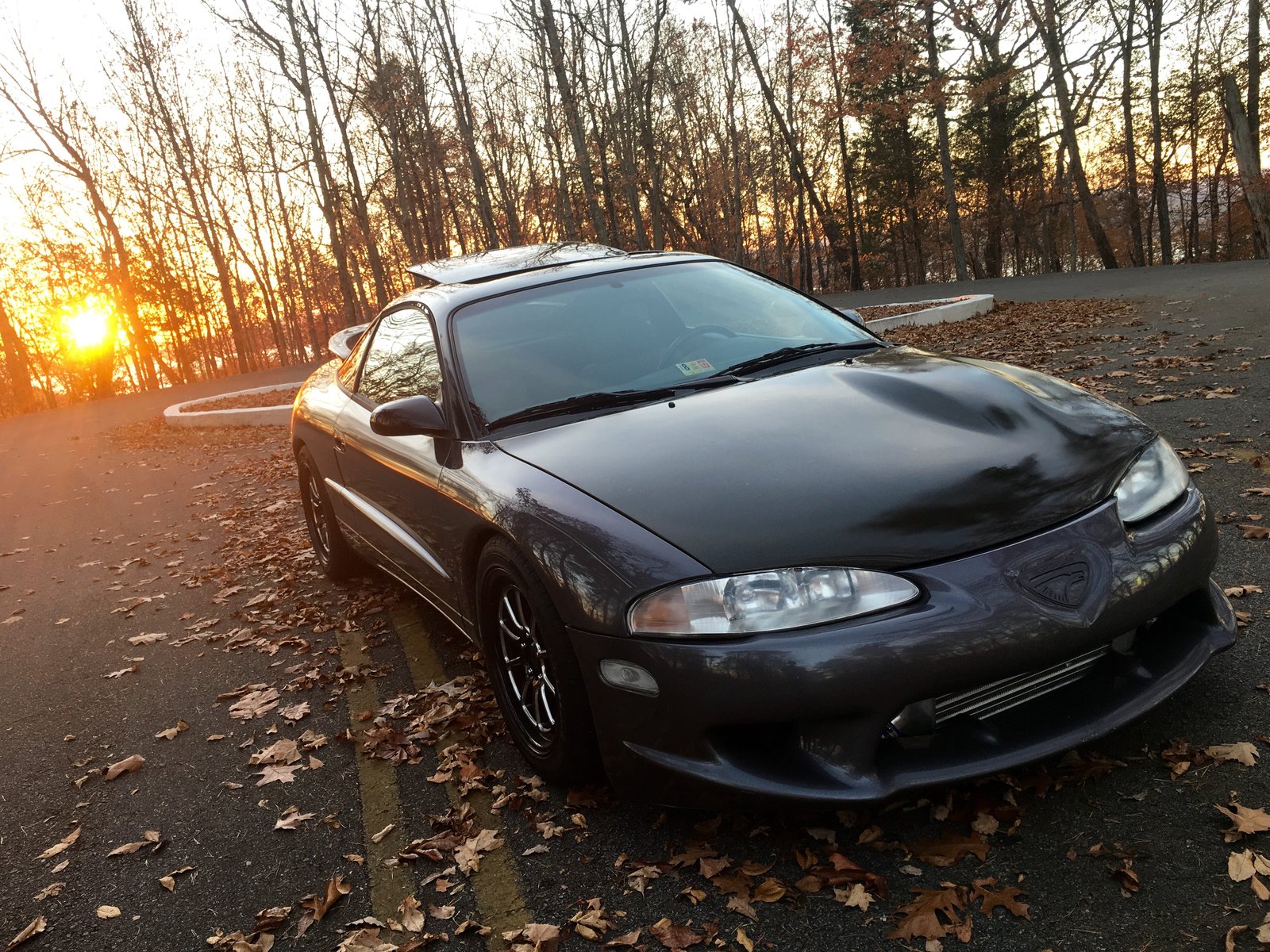 Been slowly working out small things with the car and did some driving to my favorite spot to take some pictures. I love these cars 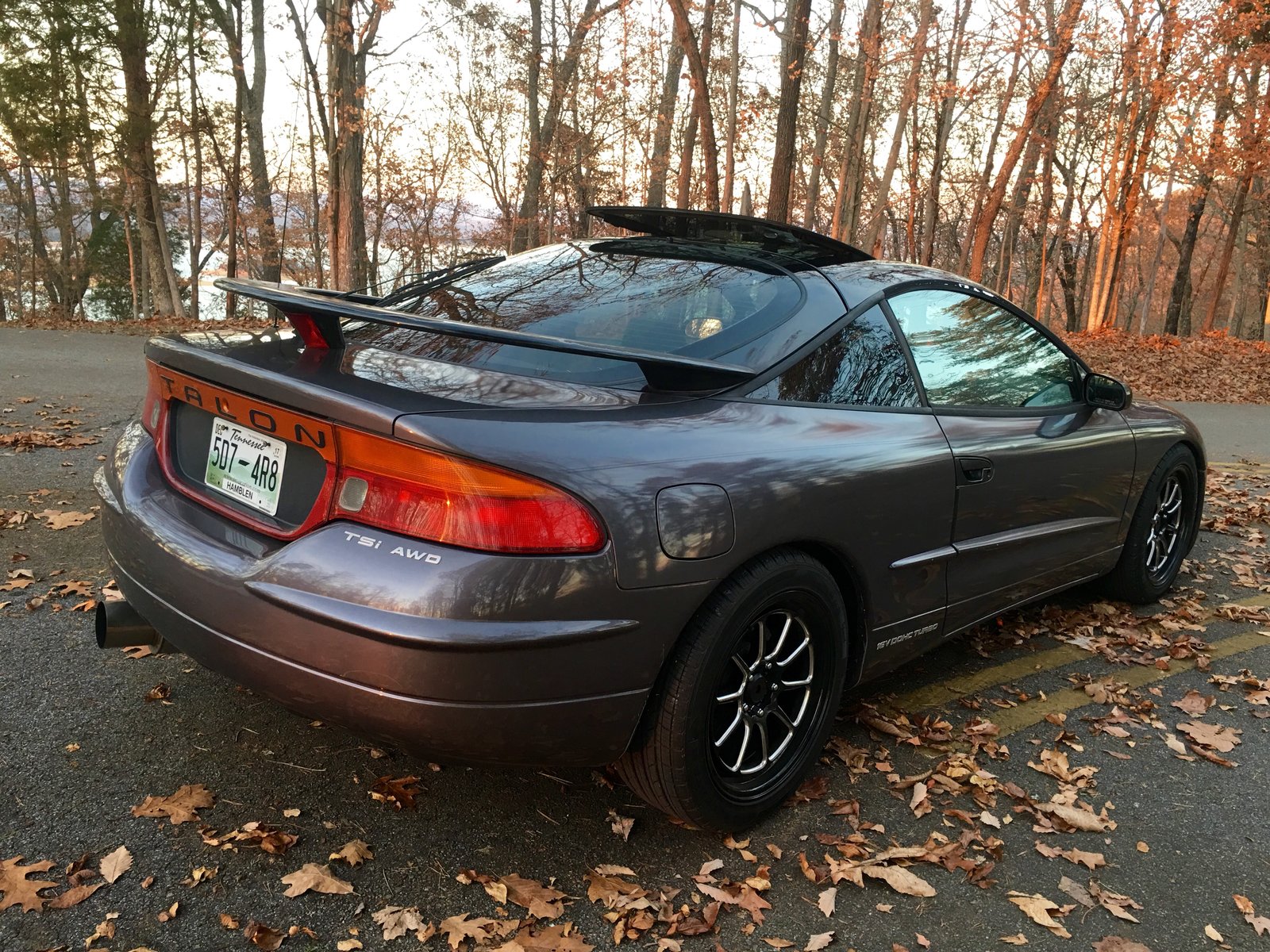 Thank you for the kind words! It's coming along slowly but surely!
Charles

So I've decided that the next string of parts I buy is going to be getting rid of the MAF-T and installing dsmlink along with any other parts that I'll need. Im tired of this spotty tune.

The car has an aftermarket boost gauge but it's crap and only works half the time. Will be buying some sort of wideband, boost, and oil pressure gauges and a triple pillar pod. The dual pod I have now is crap as well so I'll be glad to not have it in my sight anymore

Will be buying a new FMIC and piping so I can get rid of this chunky looking GM MAF and all the wiring, and have a bigger/nicer core. I absolutely despise the way the FMIC and piping look on my car.

My 16g has developed a bit of shaft play and if it blows then I'll probably end up with a fp68hta. I have enough fuel for that turbo so it should be a good time.

The cheap tubular manifold currently on here looks like it could just fall apart at any moment so an FP mani and new hardware is in order. I prefer the look of it to most tubular manifolds anyways. Plus it's cheap and proven so it's kind of a no brainer!

Motor/trans mounts are on the to-do list also. Having some engine moment under hard accel/decel... Which is bad news. Any suggestions on mounts? Would be cool for solid ones but off the shelf poly mounts would be most practical I'd think.
Charles

A bit late, but congrats on your new DSM addition! I'm in love with that gray color; looks really unique under the right lighting conditions. Your new choice of wheels is definitely better than what the car originally had, but I guess everyone has their taste. I definitely agree on the exhaust though, too bulky for the shape of the rear bumper. It's too high up and that can is just sticking out too much. Just please never ever swap the bumpers for Eclipse ones. #savealltheEagles!

Good luck with the build

!
-Stefan
I like to give info that nobody asked for.

Very nice car. Has it been entered into the 2Gb Talon registry? You definitely have a rare one on your hands.
-Nick

Oh trust me. I like the Talon body style much better than the eclipse, these bumpers are staying

And yes I did enter it. Turns out it's one of a kind. Peep this picture that shows the stats. 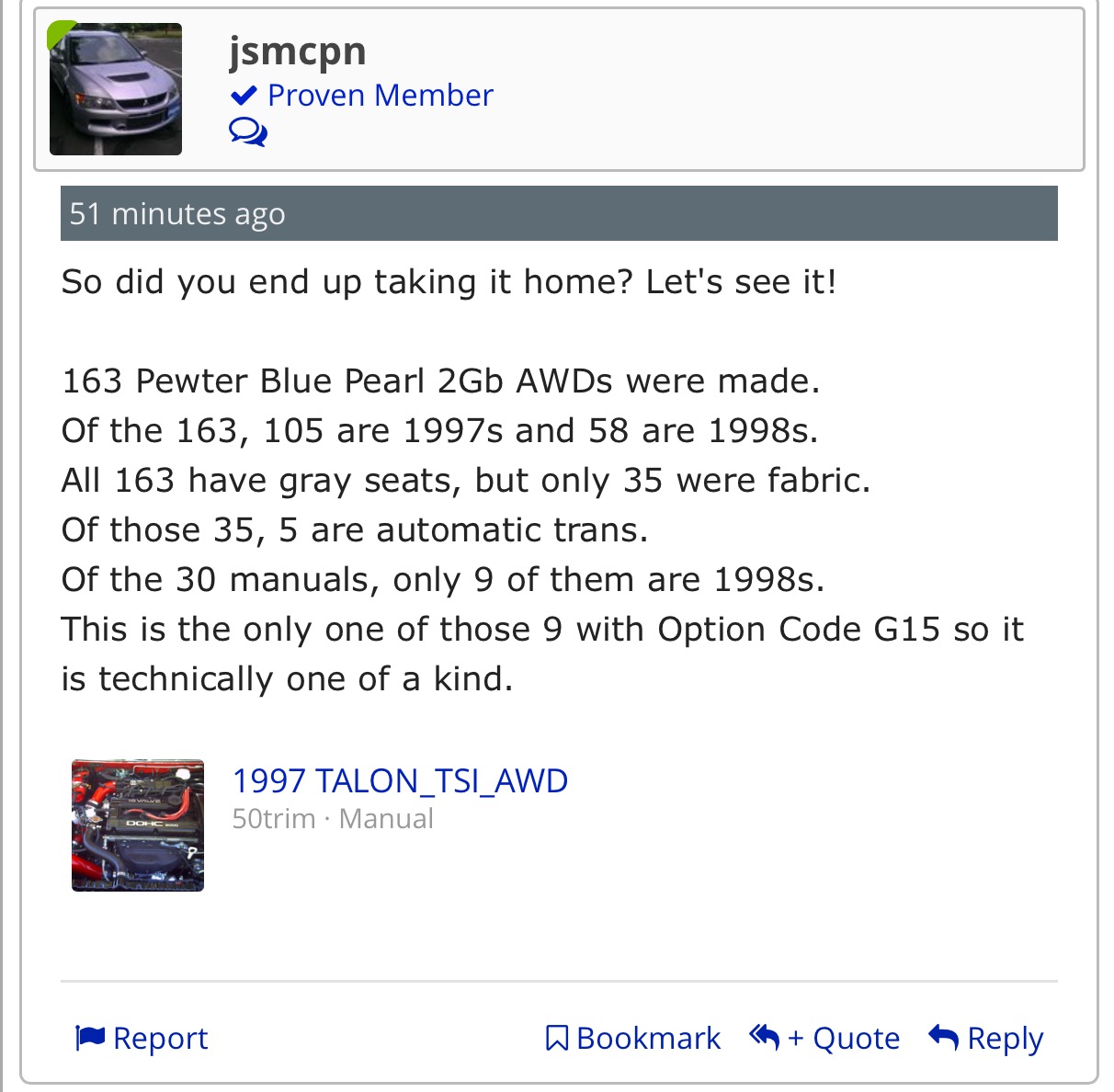 Thank you all for the kind words, can't wait to see what this build has in store for me! This spring is when I'll most likely be going through with all the major modifications, it's backwards but it's what I can do. I'll daily my Ducati while the dsm sits and gets pampered with parts!

I did buy some CT9A mudflaps and I love the look it gave the car. Also they'll help protect my paint! Also have the seats a good clean. The carpet is pretty dirty... Gonna have to remove it and see what I can do with it outside the car. Will try extracting and steaming but if it doesn't come out I'll have to find a solution.


And of course, some pictures. 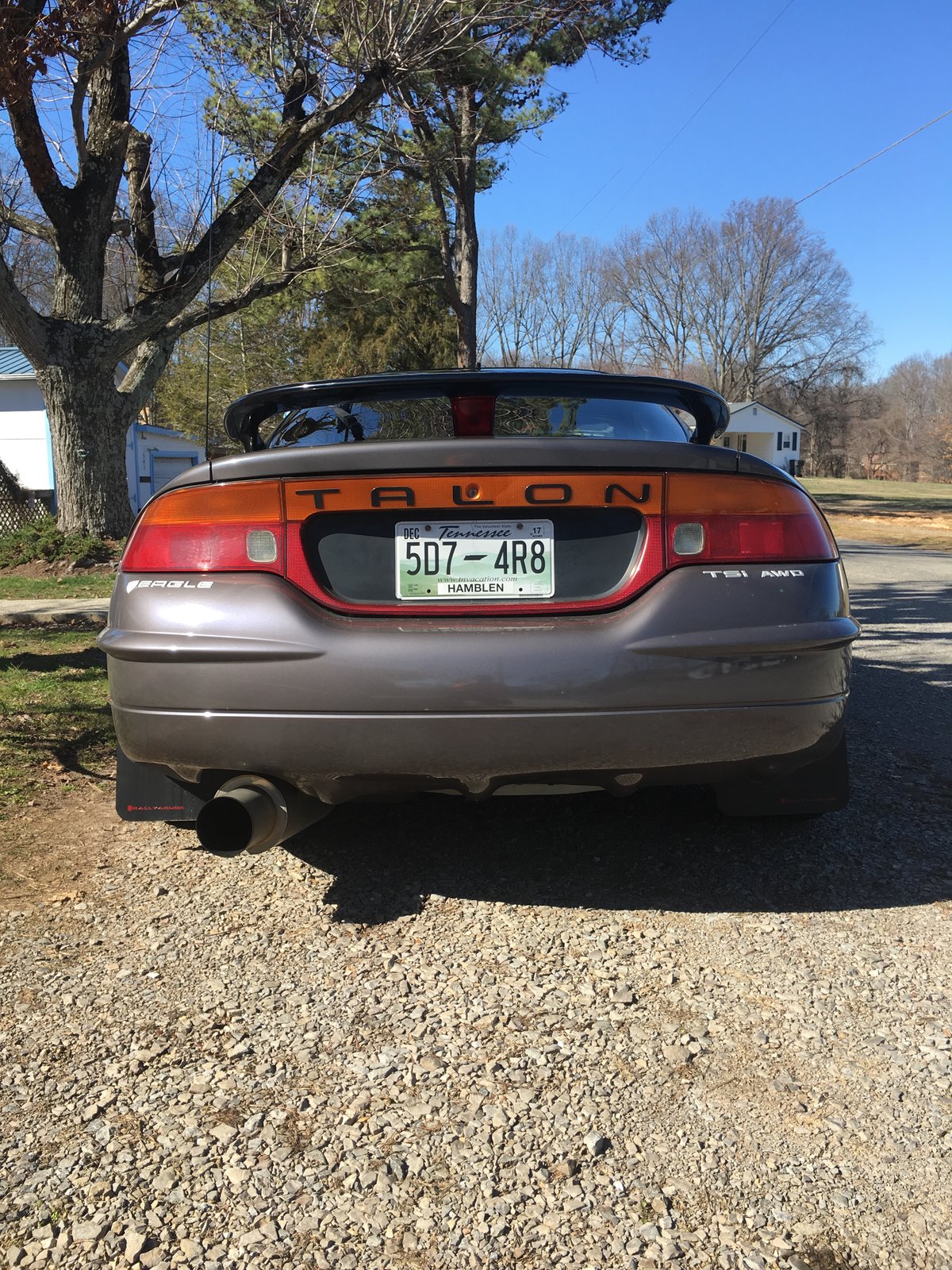 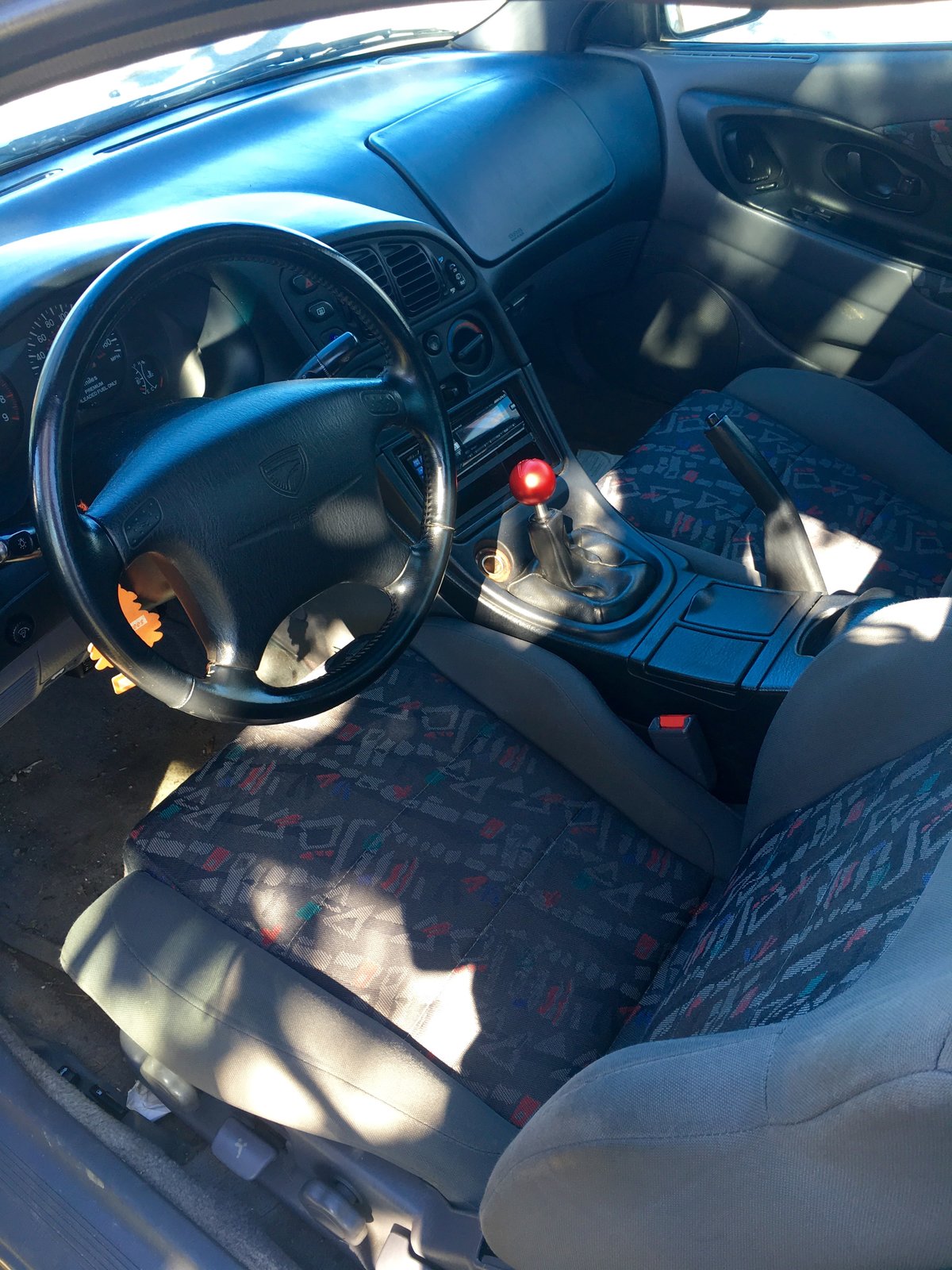 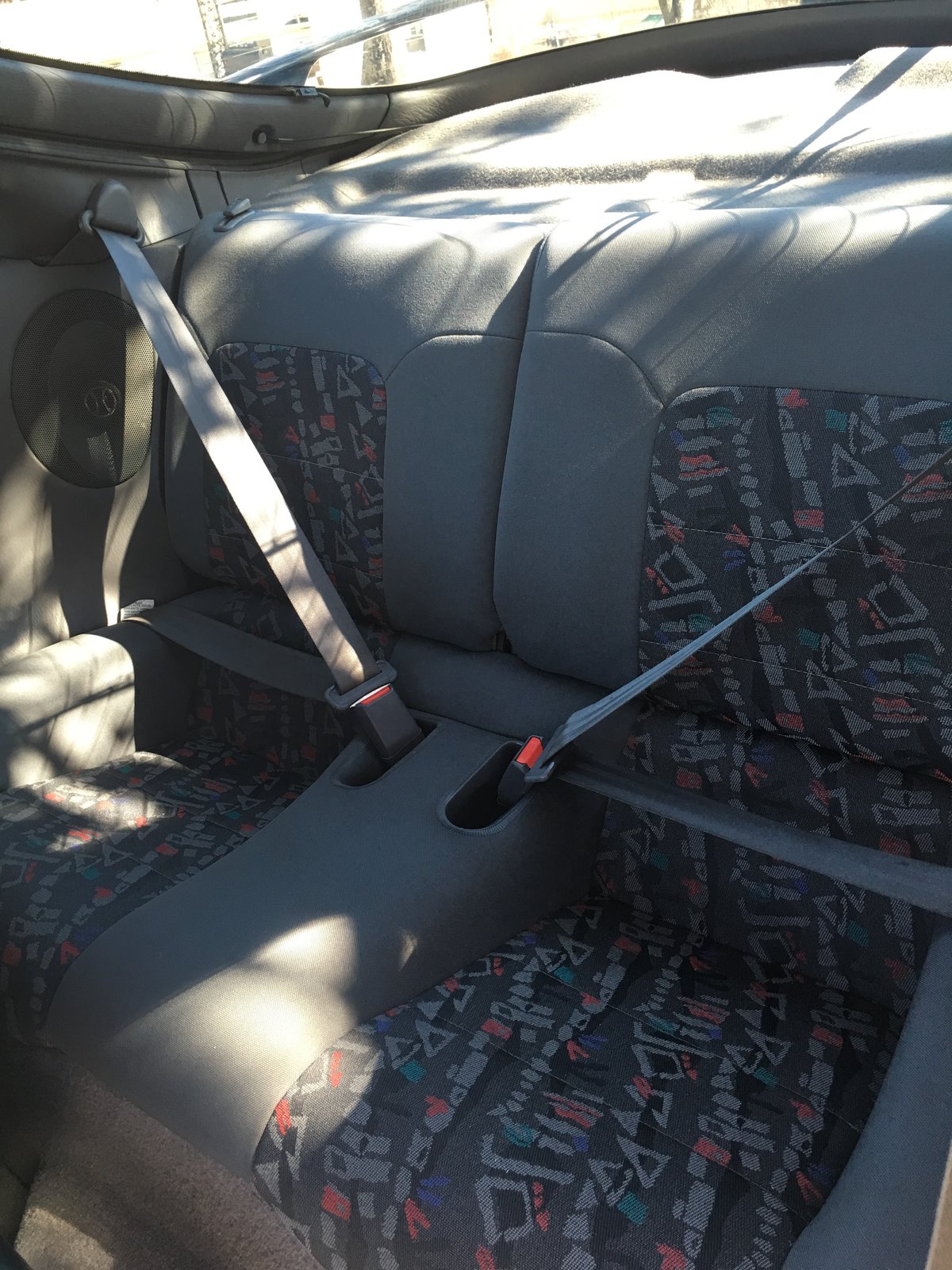 Quick, make a DSM Profile of this car so I can rate/like the hell out of it!!!
-Stefan
I like to give info that nobody asked for.

Haha as soon as I can I will. Had trouble making my pictures small enough for it to upload them! My little brother tried his iPhone photography skills at our recent trip to the park. Not too shabby. 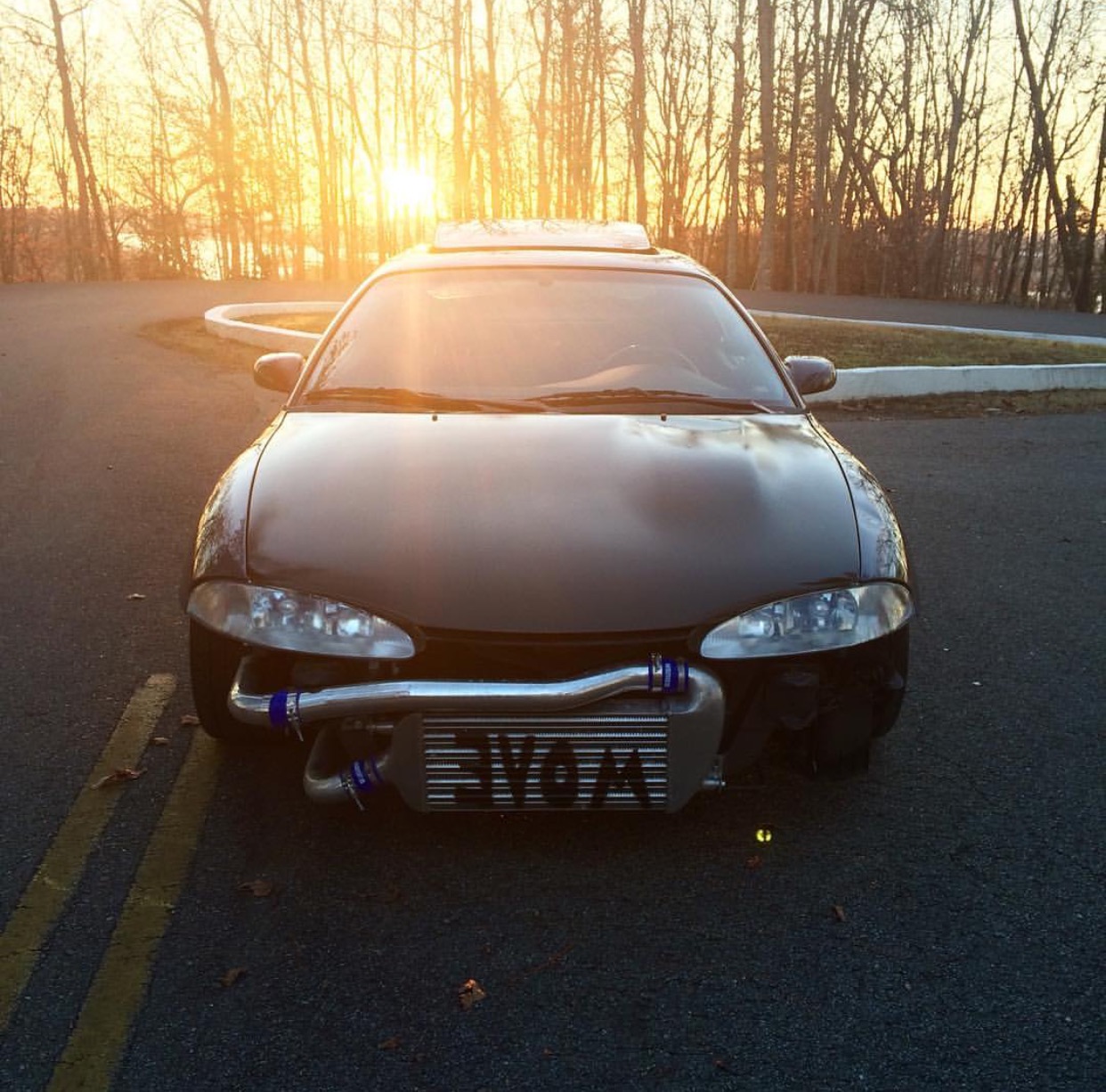 So there's nothing set in stone yet, but an opportunity arrose for me to purchase something I've wanted since I was a kid. A friend of mine in Japan has a 1995 r33 GTR he's selling for dirt cheap(for a GTR) and he will hold the car for me in his shop til it turns 25. He's a licensed dealer and can have the car legally imported along with all of the documents when the time comes. Seeing as how price inflation is absolutely bonkers on anything with a GT-R badge stuck to it, I'm gonna try to make this happen before they skyrocket into the 50k+ range.

If anybody on here is serious about buying my DSM, and will not ruin it please send me a message at 423-258-4973 and we can discuss a price. If not, I'll happily continue on with my Talon build and enjoy every second of it!

For those of you who like GTR's here's a few pictures of the one in particular. 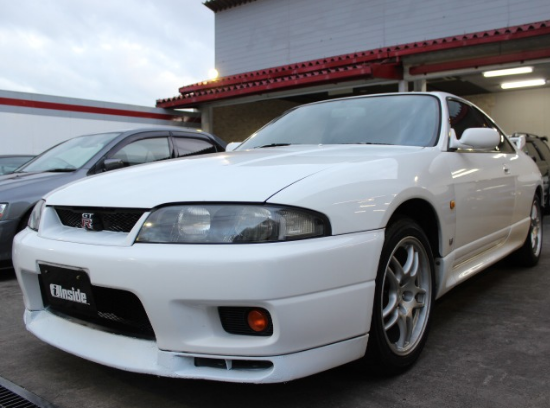 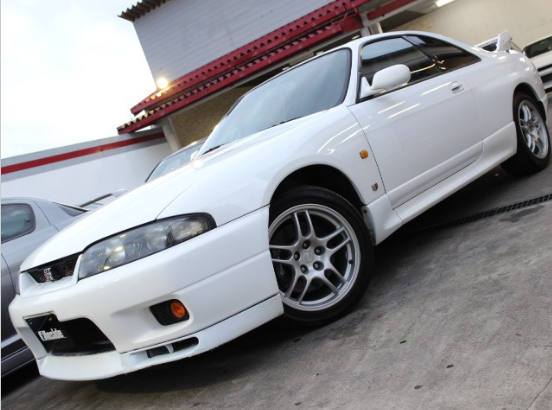 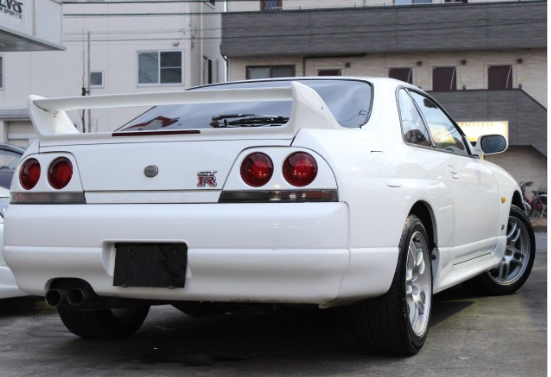 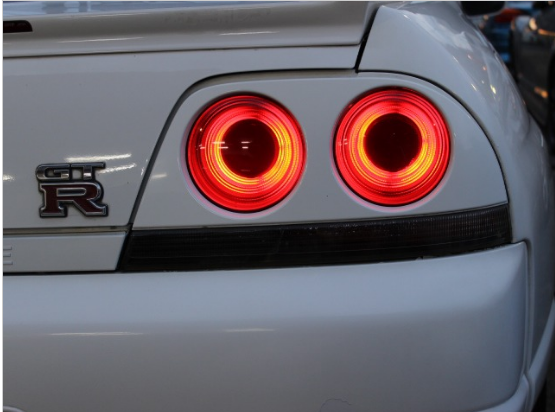 I want one more and more I see them.

Most people see the R33 as the ugly duckling of the 3, but it's honestly my favorite!
Charles

charles greene said:
The temporary new shoes came in! The König wheels are now officially for sale $300 with no tires and you pay shipping.
View attachment 320087
In my opinion these wheels will flow better with the lines of the car than the ones on it now, will post pictures as soon as they're on!
Click to expand...

Nice car! What wheels are those?? They look nice

They're xxr's, can't remember the model off the top of my head but they look much better than the König wheels that came on it. These are 17x8 +35 and the Konigs were 17x7 +40
Charles

I live near you in Knoxville.

Oh cool, I'm in Knoxville from time to time near market square!
Charles

I window shop around this site just for fun. Its a true crime we dont have 15 year rule like canada. it amazes me how fast car value plummets in japan. My 2008 mazda 5 has 100k on it. likely worth around 6000. wish I could sell it and buy this buy this car. and to think the seller is making money...
https://www.tradecarview.com/used_car/toyota/estima/20215963/
jerry dombroski
evo 1 "blue car"
94 summit wagon

94, im sure you seen how high the imports sell for at montu in oldsmar.
Maybe ask them to help you with that.


Op awsome, hope you get it.

95eclipser: 1st off, your builds are sick. 2nd of all, I replied to the message.

Really would like to find a dsm lover to buy this instead of joe blow who's gonna strip it and never finish it. That's the only way I'll let it go. Otherwise the r33 will have to wait

Well some good news! With this month being the last large payment I need to pay off a bill. I'll have some extra money for the car a few times a month. Gonna save up for some of the parts listed above (ecmlink, gauges, FMIC, etc) then I'll just go from there pretty much. I'm wanting to get some powder coating done also. Mostly for the VC, FMIC piping, and a few bits and pieces in the bay. While the VC is off it'll give me a good reason to extract the broken bolt in the head

The car is still up for grabs if anybody wants it. Will give a special price and an extra set of headlights to whoever buys it!

On another note, thinking about dying my carpet black. I took it out and steamed to with little improvement. Hard to complain about anything though, nothing like spring weather cruising with the windows down and the turbo spoolin'

1998 Eagle Talon TSi
Street Build
You must log in or register to reply here.