1G weird smoking issue ONLY after boost, then clears up

Well, spilled my built block the other day after discovering the deck needed surfaced, so I tossed in the stock 6bolt bottom end this car came with. the head is the same one I've been using recently and has new valve seals. the turbo is my wh1c with hx40 compressor wheel and cover and was rebuilt about 20k miles ago when I put ît on.. the block reads good on compression with no large variances between cylinders.

On the initial startup I didn't realize my turbo drain line was kinked and it forced a good amount of oil out the turbine side turbo oil ring. I then corrected that and gave ample time/miles for it to burn clean. mind you this turbo never caused any smoke previously. N

well, at the current time Incan start, idle, cruise the car as long as I want getting it god and hot (up to temp anyway) abs there will be absolutely NoSmoke. But , if I get into boost it will puff a small amount under load, but if I stop the car it will puff a large cloud for a good 30seconds or so then completely clear up, only to start again next time I get into boost.

My question is for those who've dealt with this same issue before... if and when u sorted and fixed the issue did it end up being the turbo rings or an issue with the piton oil control rings? theres no large enough traces in the DP or IC pipes to determine if its the turbo, and compression is good ,so I'm a little iffy as to the true source.

Since the turbo never smoked before, I find it hard to believe 5 minutes of a kinked drain tube fid permanent damage to the turbo oil rings., but my experience with the pistons oil control rings have usually been where they smoke more the warmer the engine got and never cleared completely úp like mine does. So id love omen input fom anyone whos dealt with this before, as I've seen threads about ut, but none where the OP came back to say the fix or ultimate cause was ever tracked down. Which hen I'm done ill fill everyone in for ure
91 GSX needs much love,

Pretty sure your turbo needs to be looked at. The return being kinked forced so much pressure on the bearings in the turbo the seals could have gone bad.

From what I have read the return location isn't that great for our turbos and when you go to an aftermarket larger turbo it's inadequate. Too much pressure on your seals in the turbo can cause them to go bad. If that kink caused the turbo seals to be hit with over 100psi of oil pressure under load no way anything good will happen.

Glenn that happened to me, kinked the drain and didn't notice, however.... I caught it withing 5 mins of starting my car so it didn't hurt my Holset. I didn't boost though, so I could have blown a seal if I hadn't seen it. I noticed puffing of smoke at idle which is what made me look at the drain. If Justin will chime in he can give some good input.
@JusMX141, what do you think?
Marty - still plays with BLOCKS!
YouTube - Marty Wilson, Wilson Engine Shop
https://www.youtube.com/channel/UCwfCcimqz3w4BSVZ1fthoHQ

If the oil flow somehow passed between the sealing ring and the surface it seals against in the bearing housing, it will burn and stick to both surfaces...making them jagged and porous instead of smooth like a piston ring seal surface should be. Oil will continue to pass between the seal and housing if this occurs- it's the exact way an older 14B with no bearing wear at all will smoke and consume oil...over time, the sealing ring loses it's tension from the heat cycles and lets some oil sneak by which accelerates the consumption once the ring and housing get oil burned to them and can no longer do their job. 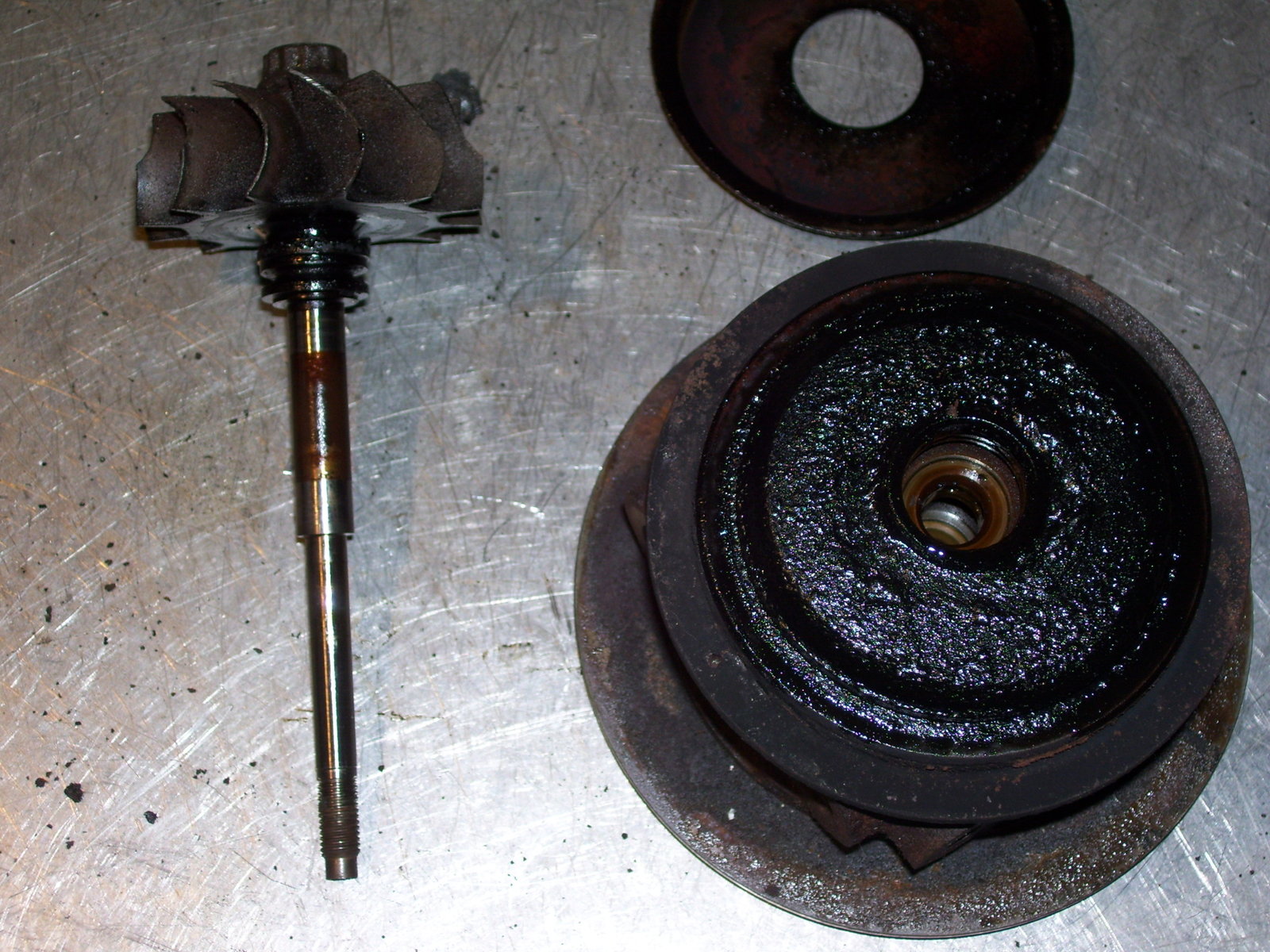 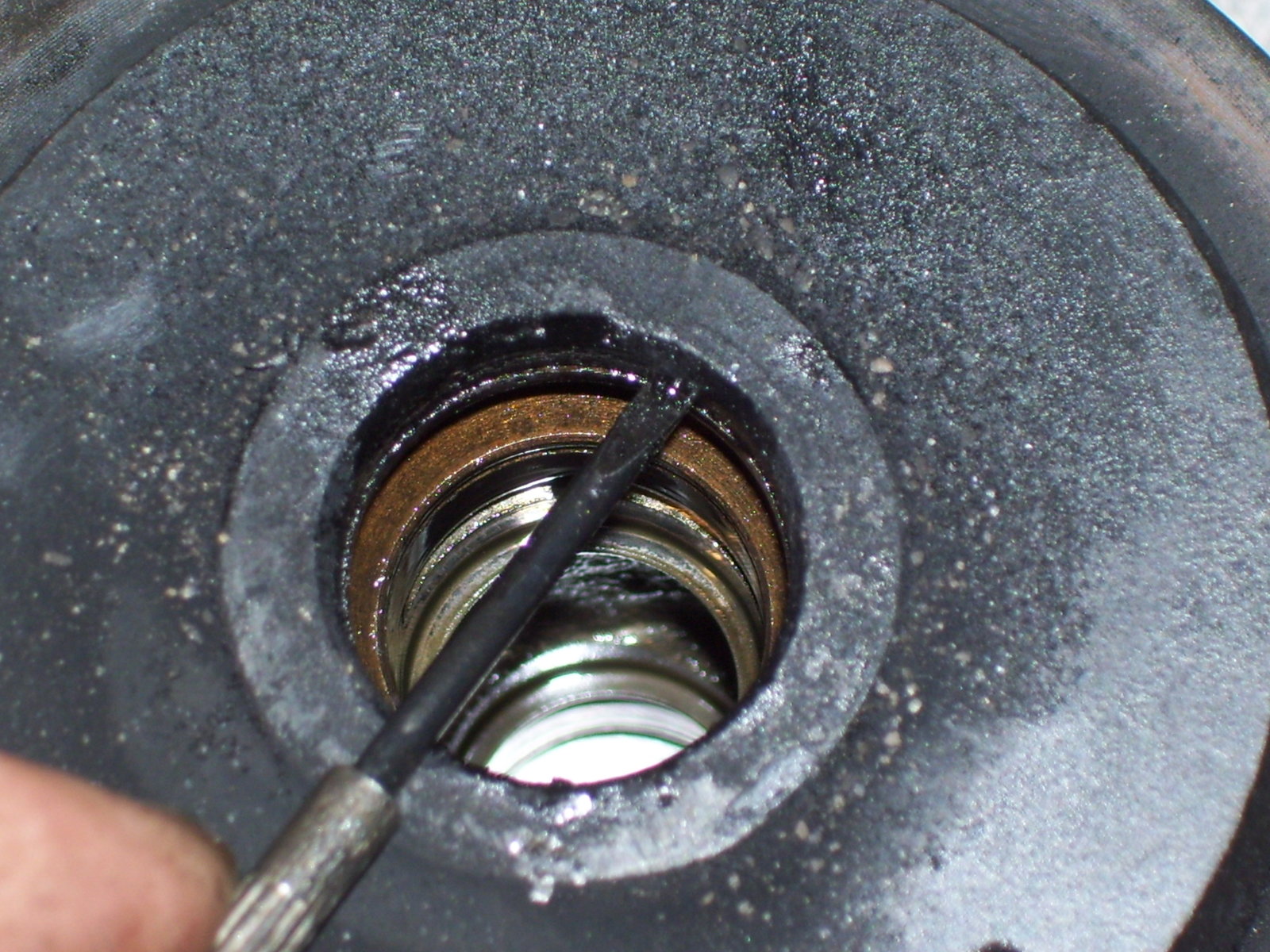 Since you mention the smoke is happening mainly under decel, make sure your PCV system is the same and didn't get hooked up incorrectly somehow during the engine swap. That's a good cause of a smoke screen that may have gone unnoticed otherwise.
- Jus - Rebuilding your journal bearing turbochargers since 2004.

Well, the turbo definitely didn't see over 50psi of oil pressure, I noticed it in the first fee minutes of warm up, and it was dumping tons of oil into the down pipe. I shut it off and inspected and found thekinked return and fixed it. I guess the only thing confusing me is how it only smokes lightly during boost then for a few minutes after. I think I still have some spare holset parts or will have to order some, thanks for the input everyone!!


And I'm not getting smoke under decell, just after boosting, even if I push the clutch and stop, it will smoke vent at idle for 35-45 seconds then clears completely up again
Last edited: Mar 15, 2017
91 GSX needs much love,

turboglenn said:
Well, the turbo definitely didn't see over 50psi of oil pressure, I noticed it in the first fee minutes of warm up, and it was dumping tons of oil into the down pipe. I shut it off and inspected and found thekinked return and fixed it.
Click to expand...

I see I thought it was worse than that and pictured you driving around boosting that b glad that's not the case.

I hope it is no more than a sealing ring Glenn!!!
Marty - still plays with BLOCKS!
YouTube - Marty Wilson, Wilson Engine Shop
https://www.youtube.com/channel/UCwfCcimqz3w4BSVZ1fthoHQ

Yea, I wouldn't have thought the turbo would keep leaking by after fixing the kink in the return. and being that iss the worst after boost then clears right up its really had me scratching my head, I found my holset parts so ill toss new oil control rings In it or the nect coupe days and update whatt happens
91 GSX needs much love,

well, i'd like to thank everyone for their input, I tore the turbo off today, put in new rings on the turbine and compressor side and the smoking is gone, I also straightened and shortened the drain tube as best I could.

but when I pulled it off I found oil puddled in the first coupler from the turbo to the piping, and a light film inside the IC pipes. so it had to have been the cold side pushing oil, and I would have sworn it was the turbine side, because when I pulled the shaft exactly what Jusmx said had happened to the oil ring
91 GSX needs much love,
You must log in or register to reply here.

motor shot, smoking worse then a factory..starting from scratch...