Well I picked my 95 GSX up in August of 2009. She had a few issues like boost leaks, the LOOK at ME paint job, ricer body kit and side mirrors I could not see out of.

Within a week of purchase, I took her up to Mach V since i lived only 20 minutes away. Quick once over discovered that my radiator was leaking from the top plastic end tank, It had some hairline cracks that were spiderwebbing out. SO, I scheduled some shop time for basic maintenance, install of new mishimoto radiator, and compression and leakdown testing. Day before i had shop time scheduled, Naomi stalls out on me, in DC rush hour traffic, on a 4 lane bridge. Timing marks were still correct, she still had fuel, but no spark. Not something I could diagnose at the time, so I towed her to Mach V.

Turns out Naomi had shredded the balance shaft belt, which ate the crank position sensor, so there was my no spark issue.

Well after the shop changed all her fluids, installed her new radiator, new kevlar timing and balance shaft belts, new shifter bushings, new boost gauge she was back on the road.

Then a few weeks later, coming home from skyline drive, The DSM dropped a valve, and grenaded the lower end.... FANTASTIC!

So it took six months, but i rebuilt the motor while block was still in the chassis. PAIN IN THE REAR, will NEVER do it that way again. But she was running fantastically. All the way until she turned over 320 miles, and a rod SHEARED doing 55 in 5th gear, had been cruising for 2 minutes. The rods were shotpeened and magnafluxed when I had new pistons pressed onto them.

So, She sat in Vienna, Va for about 18 months.. Until I moved back home to Jacksonville, Fl and towed her behind me.

DECONSTRUCTION!!! Ahhh I have been waiting 18 long months for this. However, The interior developed some kind of FUNKY smell.
So, I start taking apart the interior, starting in the trunk. In the spare well I find a pool of water, almost enough to cover my windshield reservoir. Cleaned that out, and removed the reservoir, as NONE of my squirters work. Diagnosed it to be that the motors/pumps are done, all of the wiring is okay, checked with multimeter.

Detailed the interior, and the smell STILL remained... So I start taking out the back seat, Seats, and trim panels. I find a few nests from I presume mice. I clean those out. I take out the disgusting looking carpet. Turns out a previous owner cut the connectors when removing the factory amp... @$$hat

I wash the floor down real good. 2 days later.. Smell remains. So I am thinking F*&^ it, there is a rats nest of wiring under the dash, and I cant find the smell, so why don't I make it easier on myself, and take the dash out, give her a THOROUGH scrub down, and fix the cluster%^&* of wiring job that I had inherited. And this is where we are now.
Here are some Pics.

Now what i would LIKE to do, is deaden the hell out of the car. I know I am adding weight, something not normally done by our community, but it is MY car, and I like quiet interiors (road noise wise) that are capable of DAMN good audio. I plan on 45 square feet of assorted peel and stick mats, a gallon of second skin spectrum sludge, 60 square feet of closed cell foam, and 36 square feet of mass loaded vinyl... Overkill? damn right, but i dream of the ride being quieter than a new mercedes minus the sound of my motor and turbo spool.

Also I am going to work on cleaning up all wiring, and perhaps making a harness for future gauge installs.

Are you keeping that bodykit too?

Also thats sad that everytime you think its good, she lets you down. It will all be good eventually.
-Josh || 1997 GSX & hunting for 10's

As to the bodykit... It needs MASSIVE amounts of work i think... I am no bodyman however. Rear bumper has some chips, dings, and spiderwebbing and where it was molded into/onto the rear quarter panel cracked bad.
The front bumper has real bad cracks (one of my not so smart moves, when I was loading her onto a trailer for the first time, I didn't remove the front bumper cover, so the trailer ate it). Also, whoever painted the car, did not use the appropriate primer or prep or something, because the sideskirts are flaking and chipping so badly, if i catch ANYTHING on an edge of paint it comes right off... 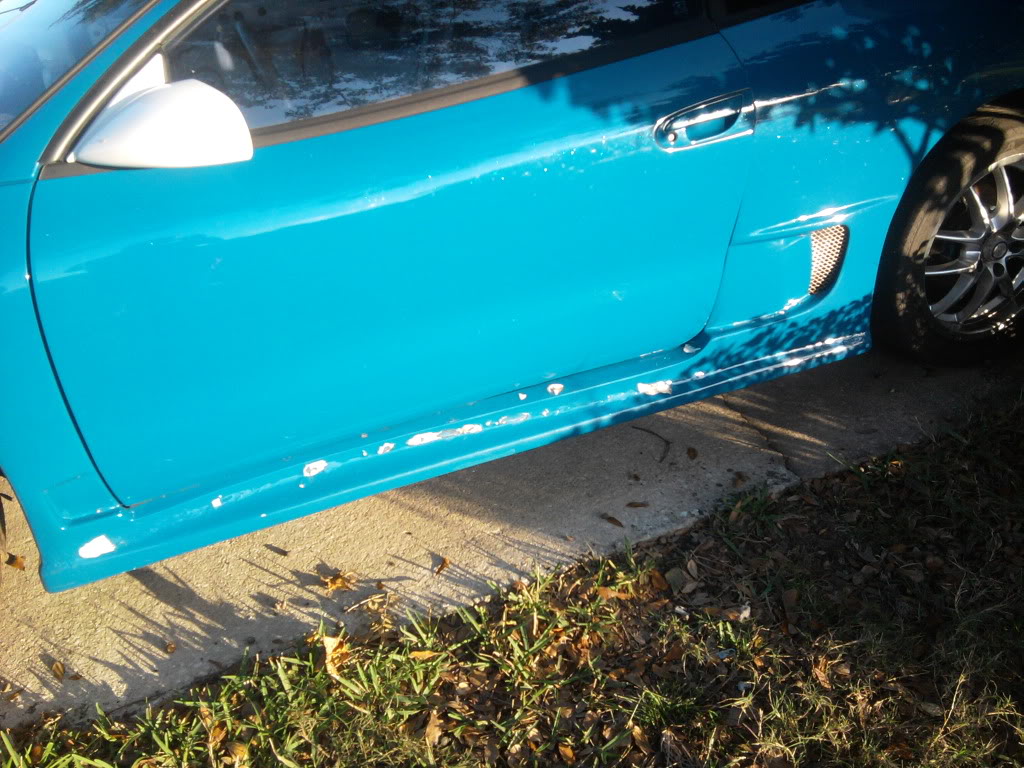 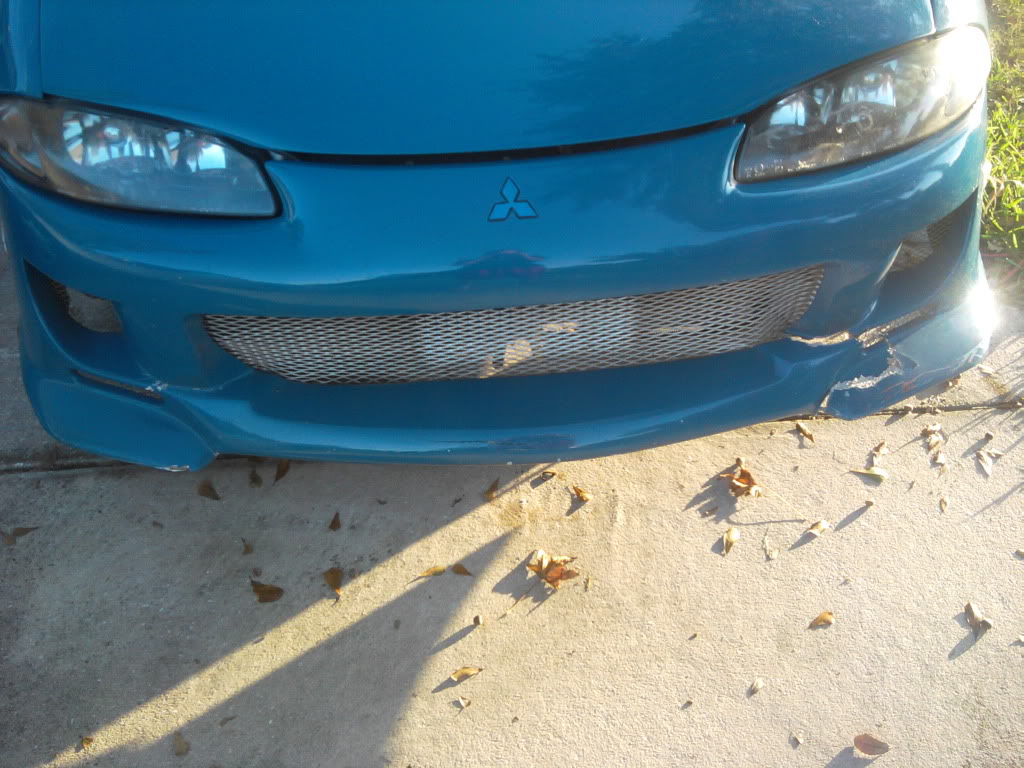 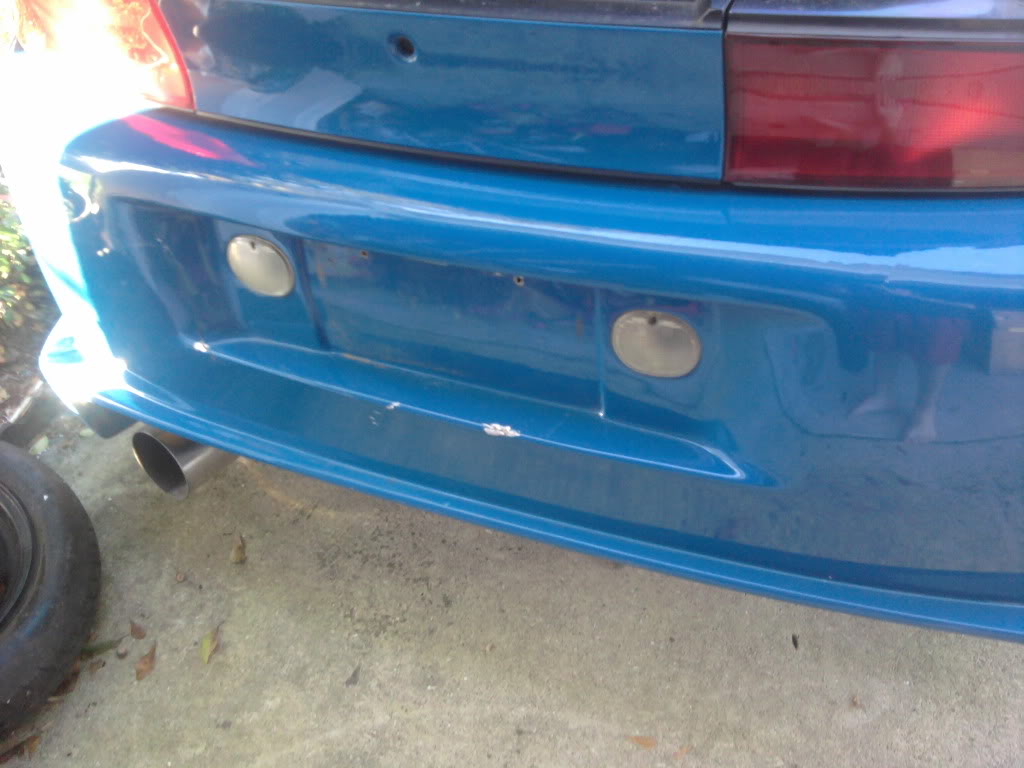 Plans- I will change the front to a 2gb Front bumper cover, but I like the look of the skirts and rear. So 2gb, bodykit skirts and rear, and I am in search of a 2gb highrise...

Yes, it sucks how she leaves me high and dry, just as soon as I think I have her good. Next motor rebuild will be forged rods and pistons. Just depends on the block and crank i wind up scooping up...
I still have faith, but if she breaks for a third time....... We shall see... Have the day off so will be getting some more done today...


Update: Had a busy day this past Sunday. Started getting busy on the interior. Cleaned out the Harness going to the ECU, Igntion, and just about everything else besides the radio harness so far.
Also began laying deadener on the Passenger side.

Also spent 1.5 hours cleaning the DISGUSTING carpet. 1 and a half cans of Tuff Stuff from Wal-mart, a stiff bristle scrub brush, plenty of rags/towels, and a pressure nozzle on the hose and she looks MUCH better... Some stains remain though..

But that is okay. Now it is in this bucket.

Will see how it turns out today!

Also I started customizing the interior further. Disassembled Door panels, Wetsanded them with 600 grit. Washed again with soapywater. Washed again with 91% rubbing alcohol. Placed in sun for 45 minutes, and they have been treated to 5 light coats of Krylon for plastic.

Well, That's all I got done on Sunday. Have the day off, so more getting done today. Sorry that some of the pics are so dark. It was getting dark as I remembered to take pics for updates/ posterity. Expect an update between this evening and Thursday Morningish!

Had a busy day Yesterday. Pulled the Carpet out of the Dye bath. I think I need to double up on the Dye, and I have some spots that didn't take dye so well... 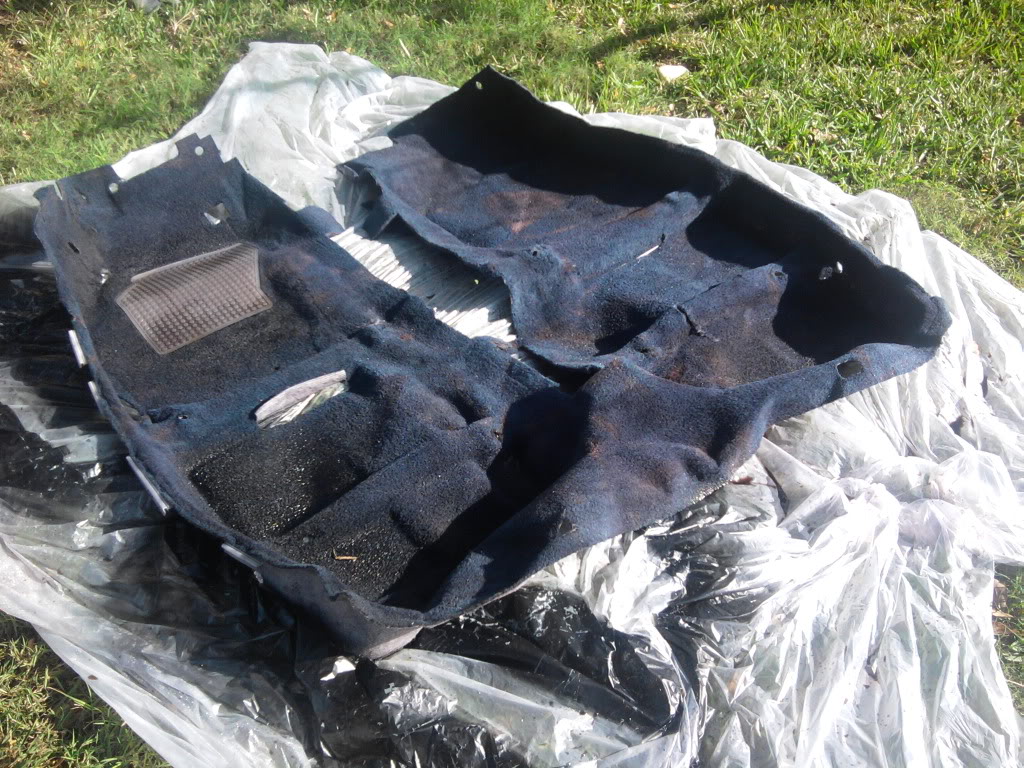 Also got more done on the dampening. The are now 2-3 layers on the passenger floorboards. sounds solid. Also, Added more to the door. There already was 1 layer of dynamat xtreme on the outer doorskin. So i added more on top of it, and started on the inner doorskin. When closing the door, there is now a solid *WHUMP* sound... still not done with it yet though. 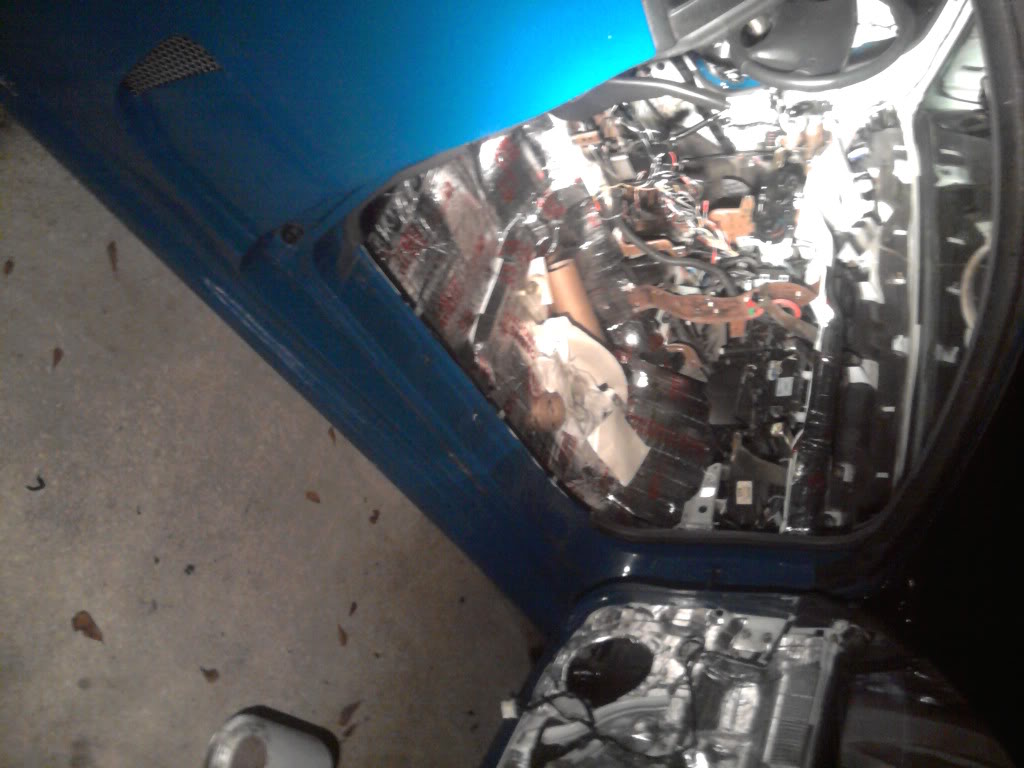 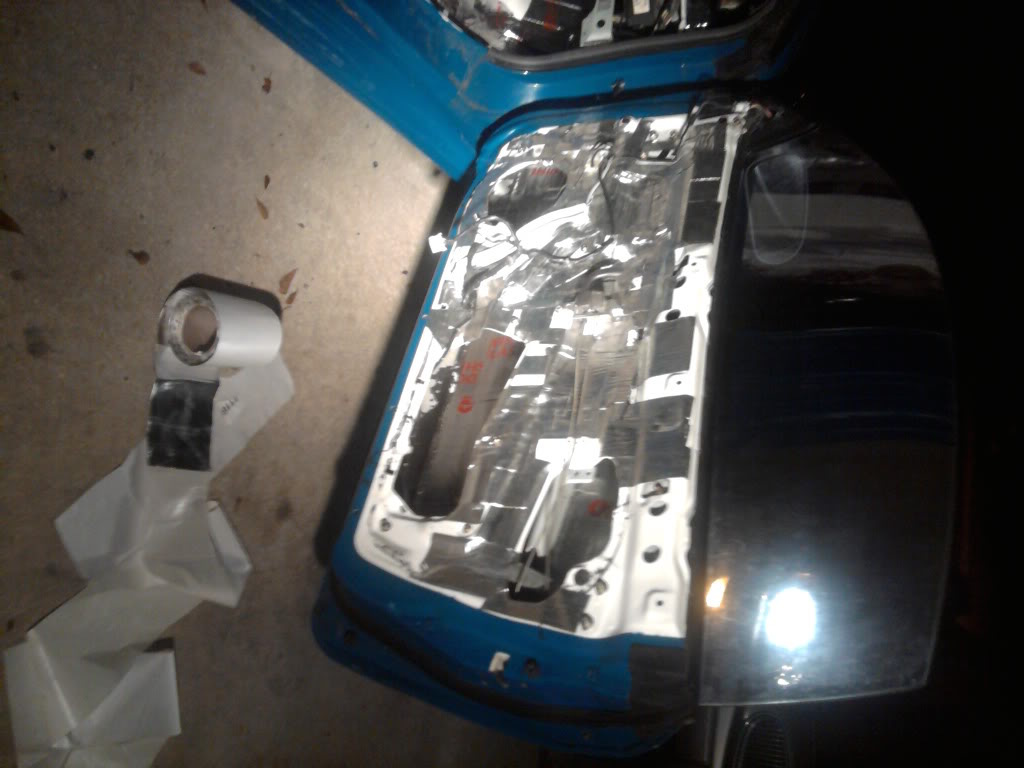 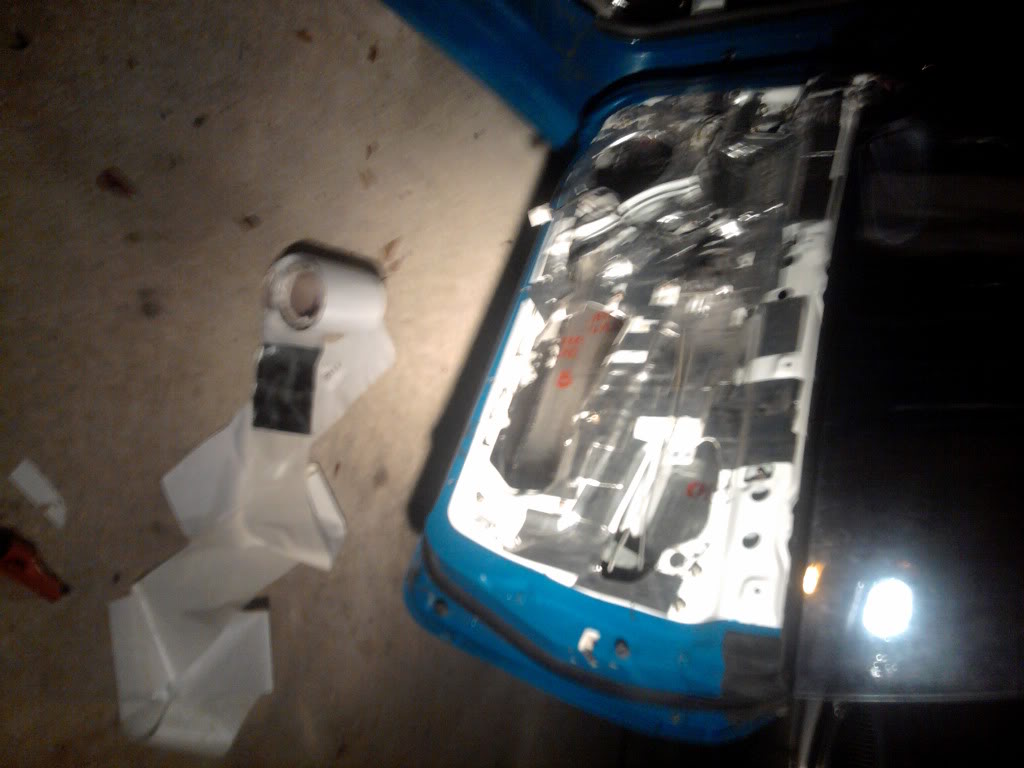 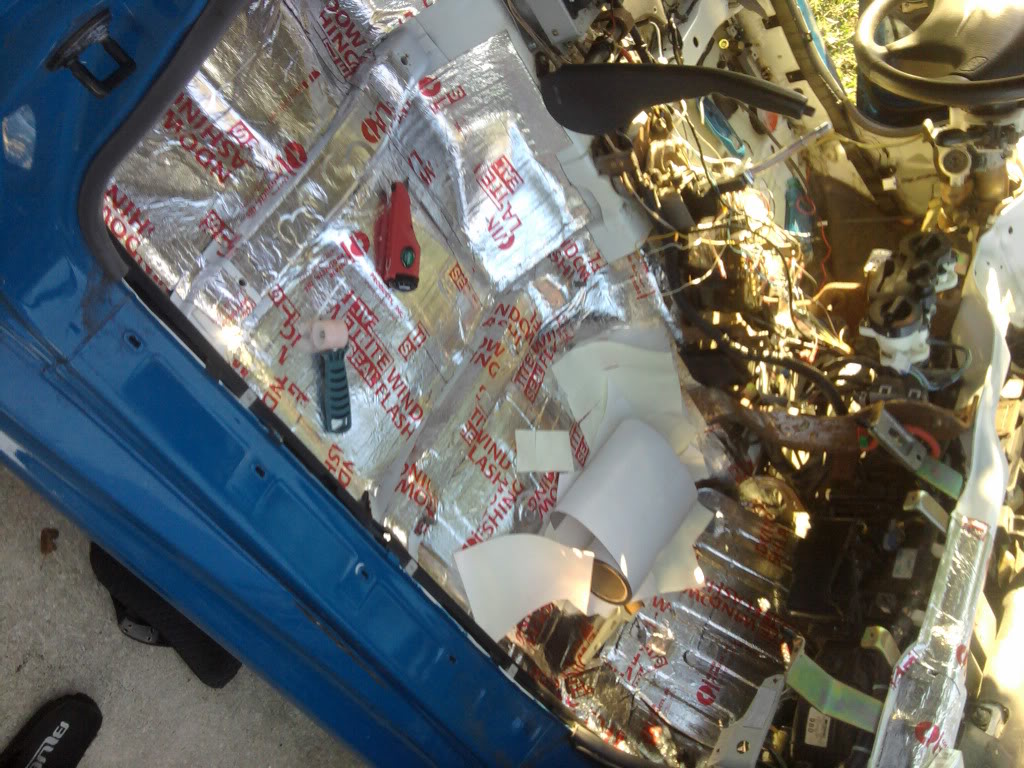 can you explain more on how exactly you got the door panels ready for paint, what all did you take off and what paper n paint did you use? did you use vynil paint? im in the process of changing the color on my interior as well.. thanks

deviousgst said:
can you explain more on how exactly you got the door panels ready for paint, what all did you take off and what paper n paint did you use? did you use vynil paint? im in the process of changing the color on my interior as well.. thanks
Click to expand...

Im not sure what you missed. All of that info is in the post and pictures. I took EVERYTHING off.... i said 600 grit wet sandpaper. i used palmolive dish soap for soapy water. and 91% rubbing alcohol... I also used Krylon Satin Black for Plastic....

how is the paint for your panels? Is it peeling?

so far so good. seems to be holding up really well... I'm still not touching it with bare fingers yet though... I want to be COMPLETELY sure they are dry/ set etc etc... But they are REALLY black though, so it is a good thing.
You must log in or register to reply here.