Well, I think is time to add my resent buy to the forum.

Background of the car, the original engine broke and was replaced with a Japan engine.

The car was overheating after the engine transplant and they replaced the head gasket.

That’s all what I was told when I bought it.

I took it home and start driving it.

I notes there was a tiny coolant leak every time I park the car, I couldn’t find the leak, however, all what I wanted to do at that time was, to smog it and transfer the title.

I drove it like I stoled it on the way to the smog station and it overheated.
I came back home and diagnosed a bad head gasket, well here we go.

I send the head to be checked and it was really bad, it was warp but it was serviceable, ,
So I replaced the head gasket and took it for a spin, well, the leak was there still., So I took my time and went through everything from toe to head.
I found so many things were not quite right.
some connectors were broken, it had worn out water hose lines, it had so much rtv on the water pipes (thermostat housing and water pump connections),

I took it again for a spin and temperature still rising up, so now the only thing I didn’t check was the radiator, so I checked and it really was clogged, so I replace it.

I took it again for a spin and viola, everything was looking good, so I took it to the smog station and fail, ho no I couldn’t believe it.

I check with the scanner and found out it had the front O2 sensor dead, great, I replace it, clear the codes and drive it to read the sensors.

Two months later and it didn’t read any of the sensors, so it gave me no choice but to swap link from my warrior car.

A friend of mine helped me out with setting link and hit the smog station again.
Well, this time it fails because of no communication to the car, so didn't pass, even though, it pass the CO and all that, the guy is a learner so he couldn’t make the machine to comunicado with the car.
I return to the same station next day and the other guy did have a hard time making it work, but it did connect and viola, it pass.

Well, I said it was hard but finally it pass, so I go ahead to dmv to do the paper work, and to my surprise, they didn’t accept the paper because it didn’t had the vin number and was invalid.,

I came back straight to the smog station and show him the paper, he didn’t know why the paper came out like that, after multiple calls to his friends he end up to the solution to redo the smog, so he did it and it fail.

Jeez! What a PITA! I moved from east coast NY/NJ to Ohio. It used to take a minimum of 3 hours to get anything done in the east coast. In Ohio, you’re out of there in less than an hour for anything simple. Ohio also got rid of inspections the year after I moved here

Nice. I wish CA would off be more friendly concerning smog related. 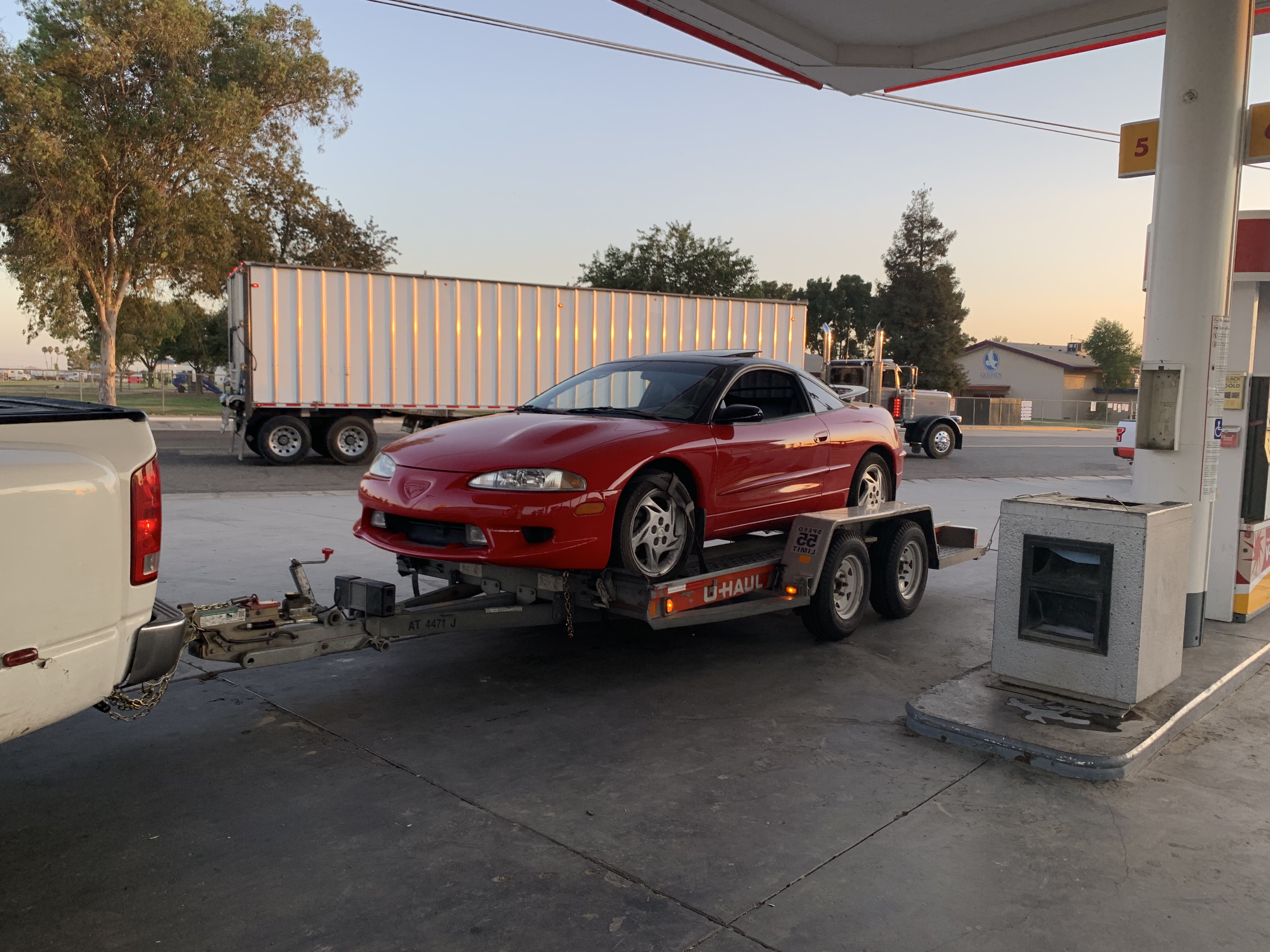 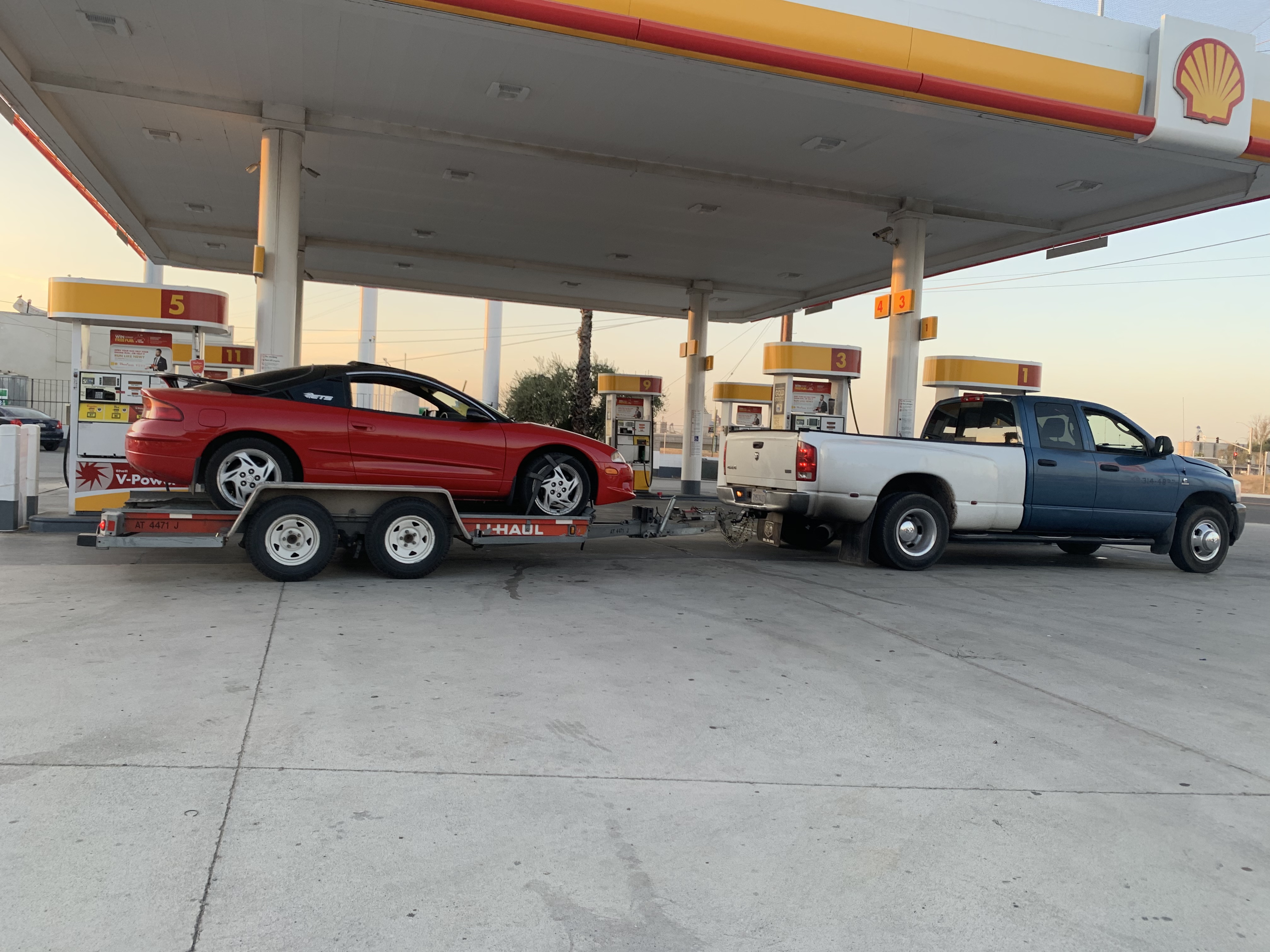 Here is how she looks like when I bought it.

I was impressed how it maintain a original look under the hood, it was completely stock for exception of a cone air filter
.
Her is a view of the disassemble. 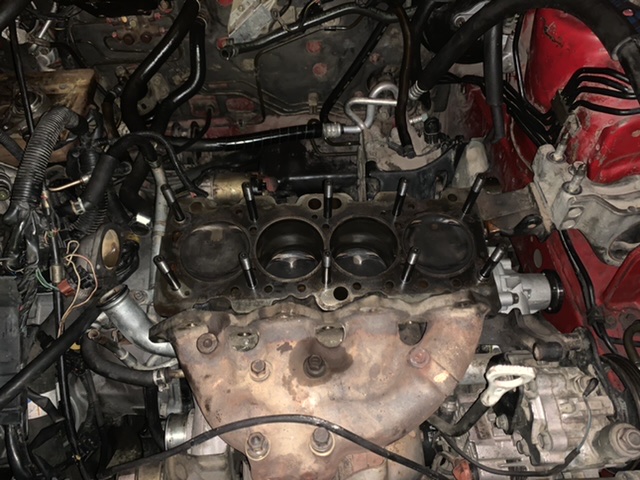 Here I’m cleaning the most I can all around the block. 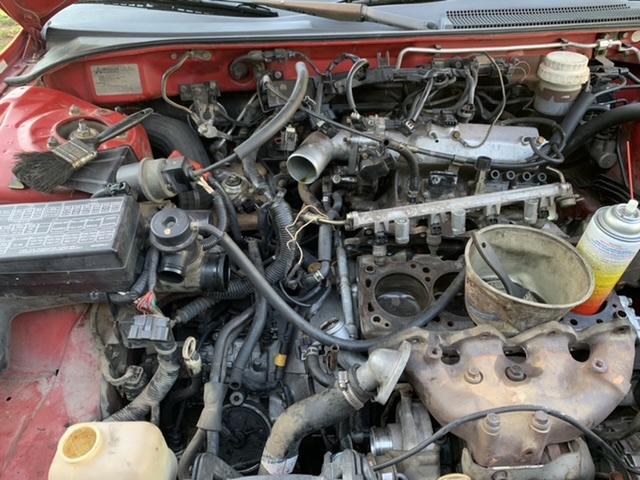 I usually remove the intake and exhaust for cleaning and inspecting/changing what Evers I see wrong or bad, but because all what I want, is to pass smog and get it register, I did it this way.

It was tricky doing it this ways which it was my first time not removing the manifolds. It feels wrong doing it this way and so many times came to my mind to take them off,. (Maybe because I’m not used to ).

After it gets registered, I will order gaskets/seals and water hoses to replace all.

My plan is to remove the complete motor and transmission including Tcase, to give a good clean up and replace all seals (Tcase is leaking from the rear ).

The body is good even the bolts being rusted there is no sign of rust to the body underneath.

Wondering if when they replaced the engine, they clean the bolts and used some heavy stuff to clean them up and made them to corroded.

IDK. All the bolts on these cars seems to rust. They probably didn't have any coating from the factory.
92 awd 6/4 68hta V2 Ecmlink V3 (of course)
Built & Tuned by
Tony

Well my weekend car doesn’t have any bolt any where near that looks like this other ones, they all are clean as hell from rust and some are even with the coating looking thing. 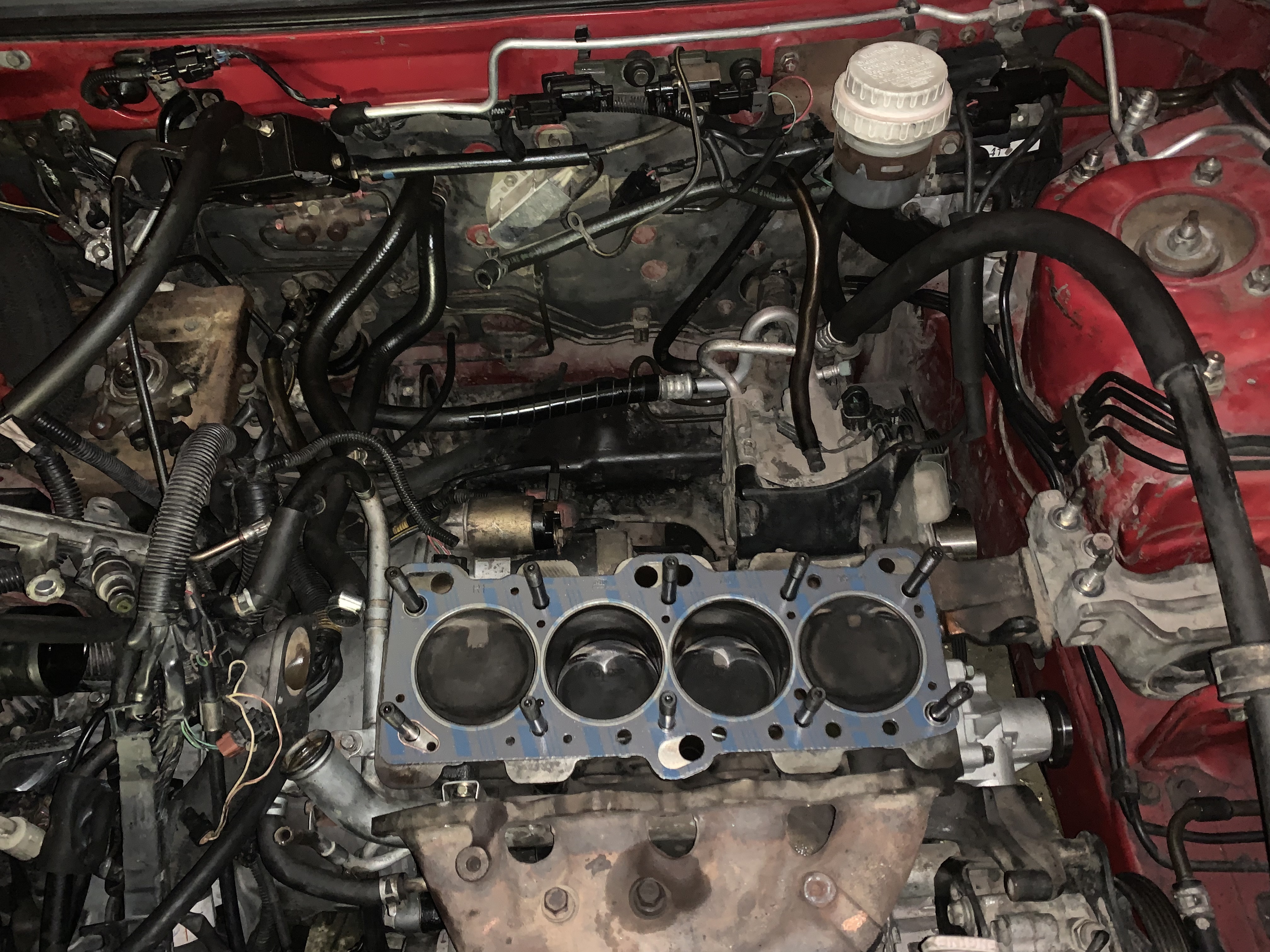 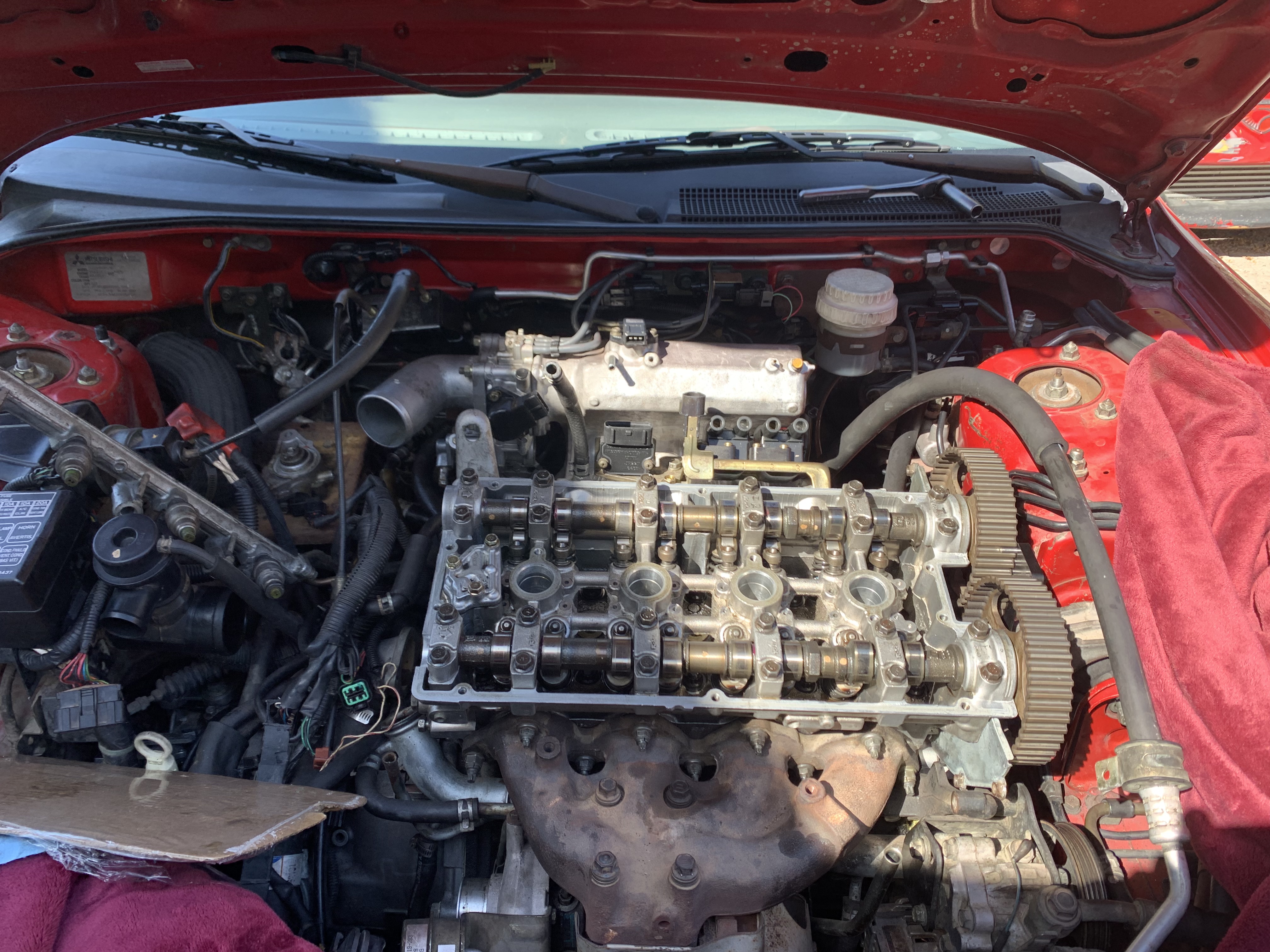 Replaced the head and drop in some ARP head studs so we should be good to go. 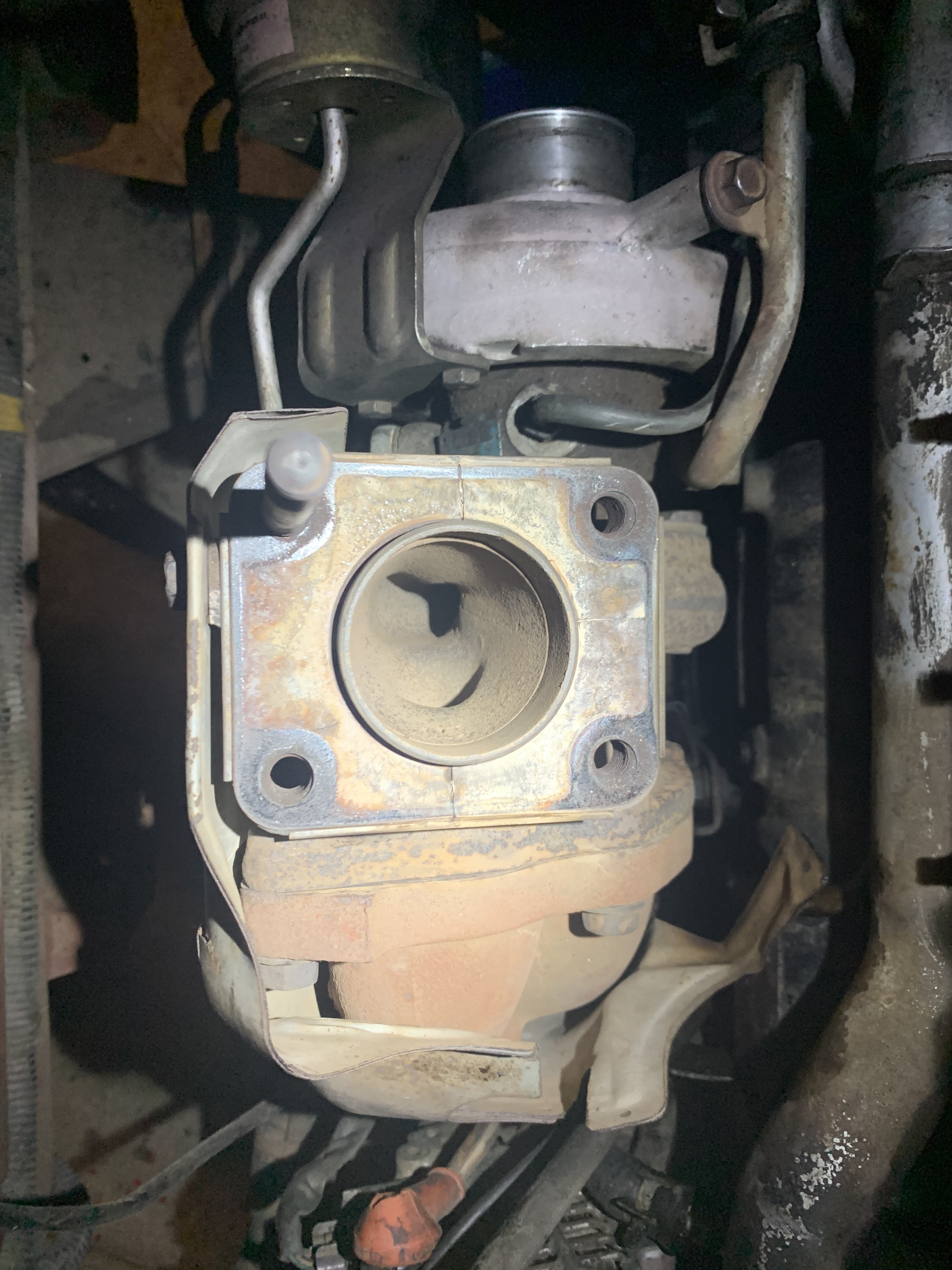 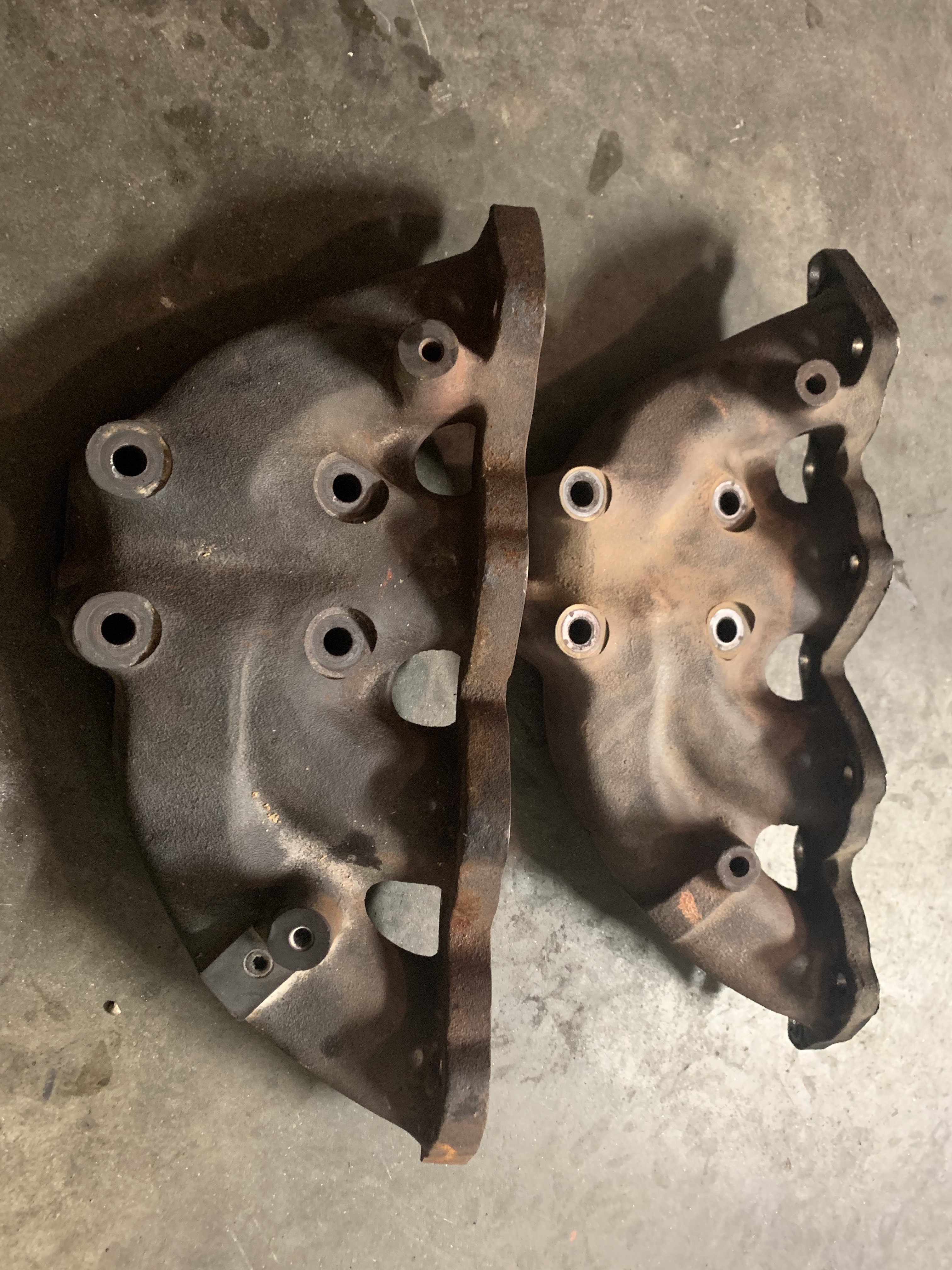 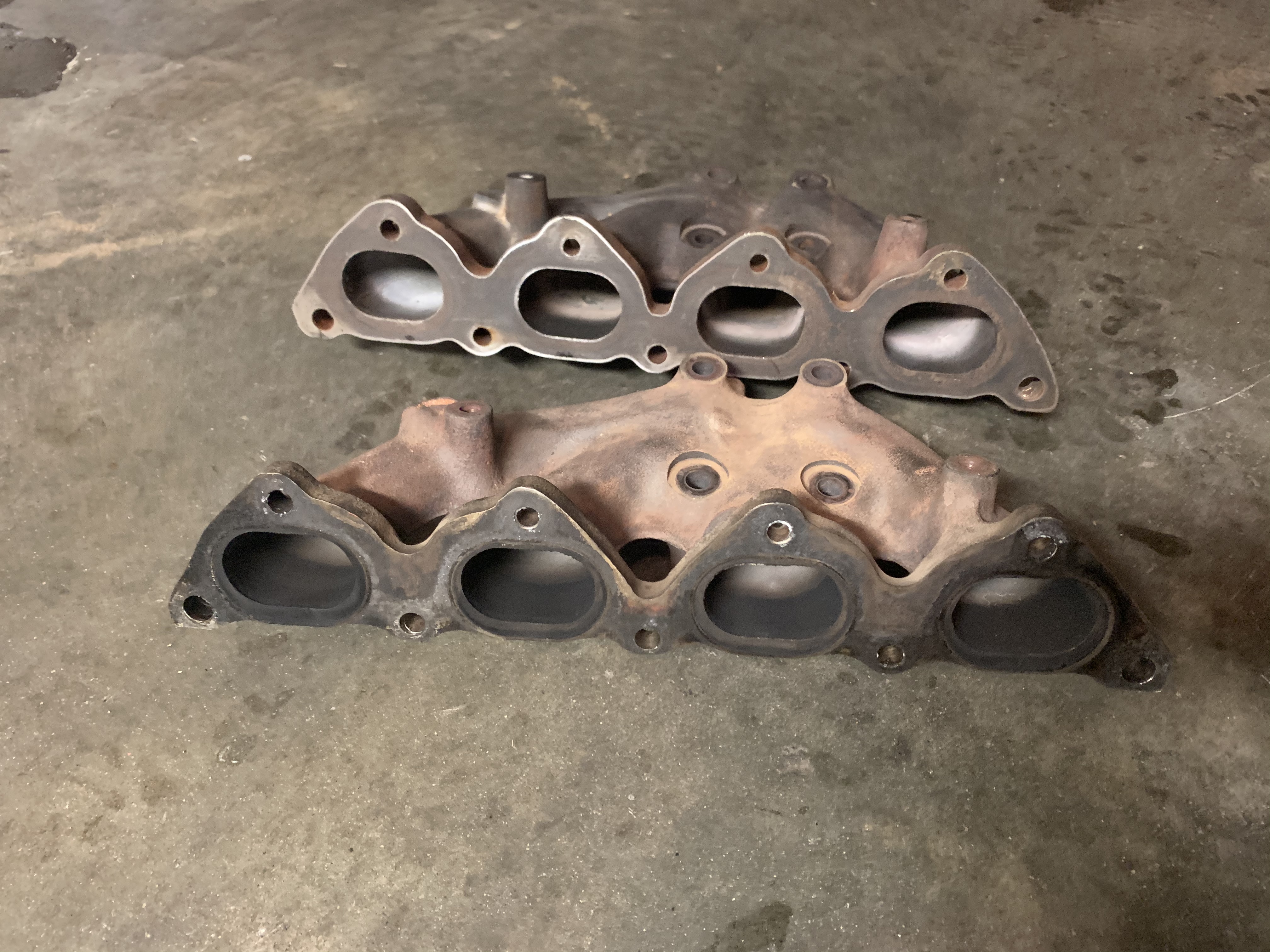 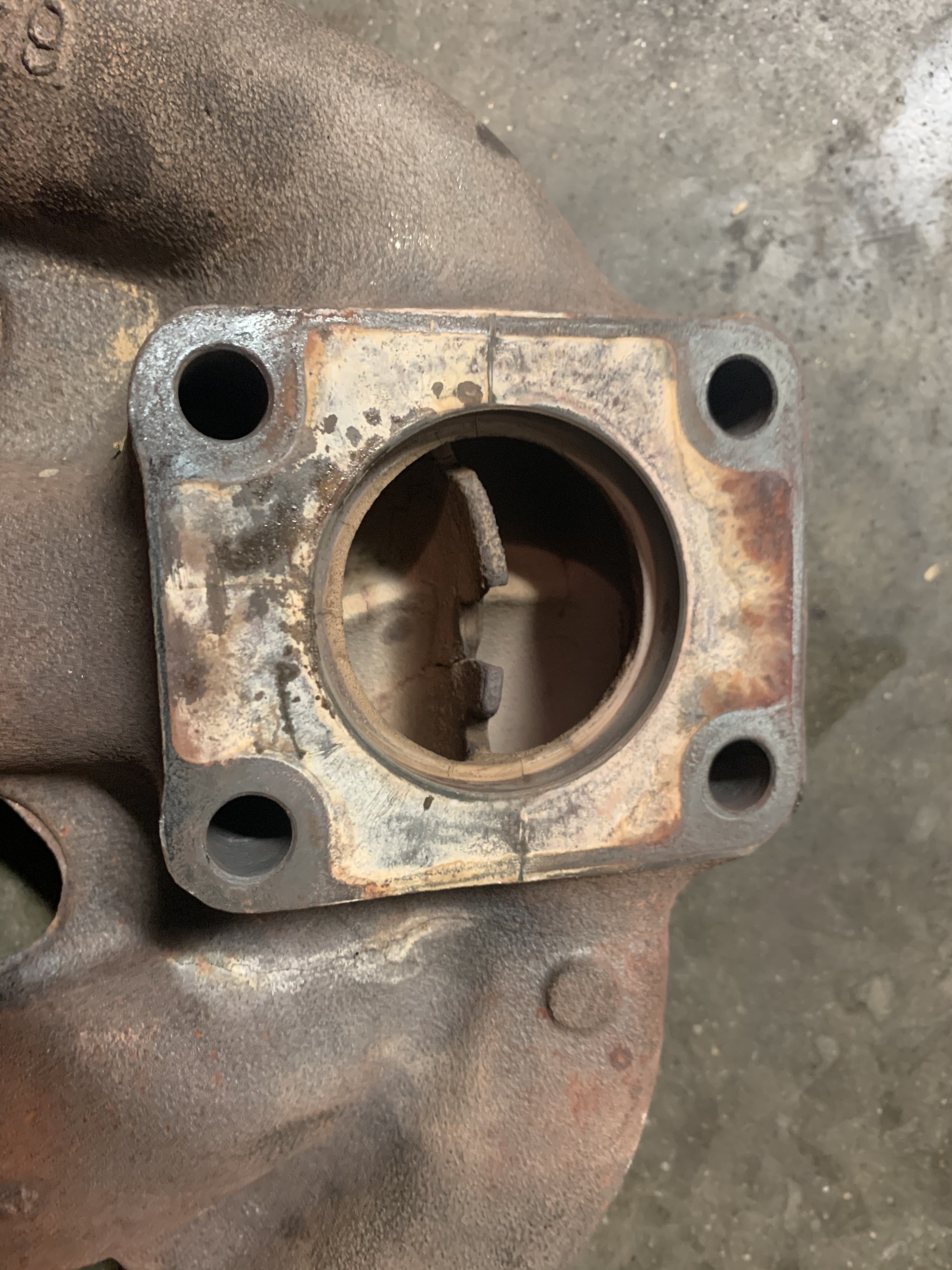 I got the head but found a huge leak on the exhaust manifold gasket (head to manifold).

I replaced the gasket and it keeps leaking so I replaced the manifold which end up being warp on both sides (head and turbo side).

The gasket from manifold to turbo was cracked and leaking as well, here are some pics.

I swap the manifold to an EVO3 that I had laying around and a ss gasket.

I had the same issue before with my 2g manifold. Brought the manifold to a machine shop and they resurfaced both side.
92 awd 6/4 68hta V2 Ecmlink V3 (of course)
Built & Tuned by
Tony

Yea I did that with the Evo manifold that I install when I used it in my weekend car,

I resurfaced everything including O2housing and turbine housing, so I knew the evo3 was in perfect conditions

Did a little clean up before putting the manifold and trace a coolant leak it used to have, 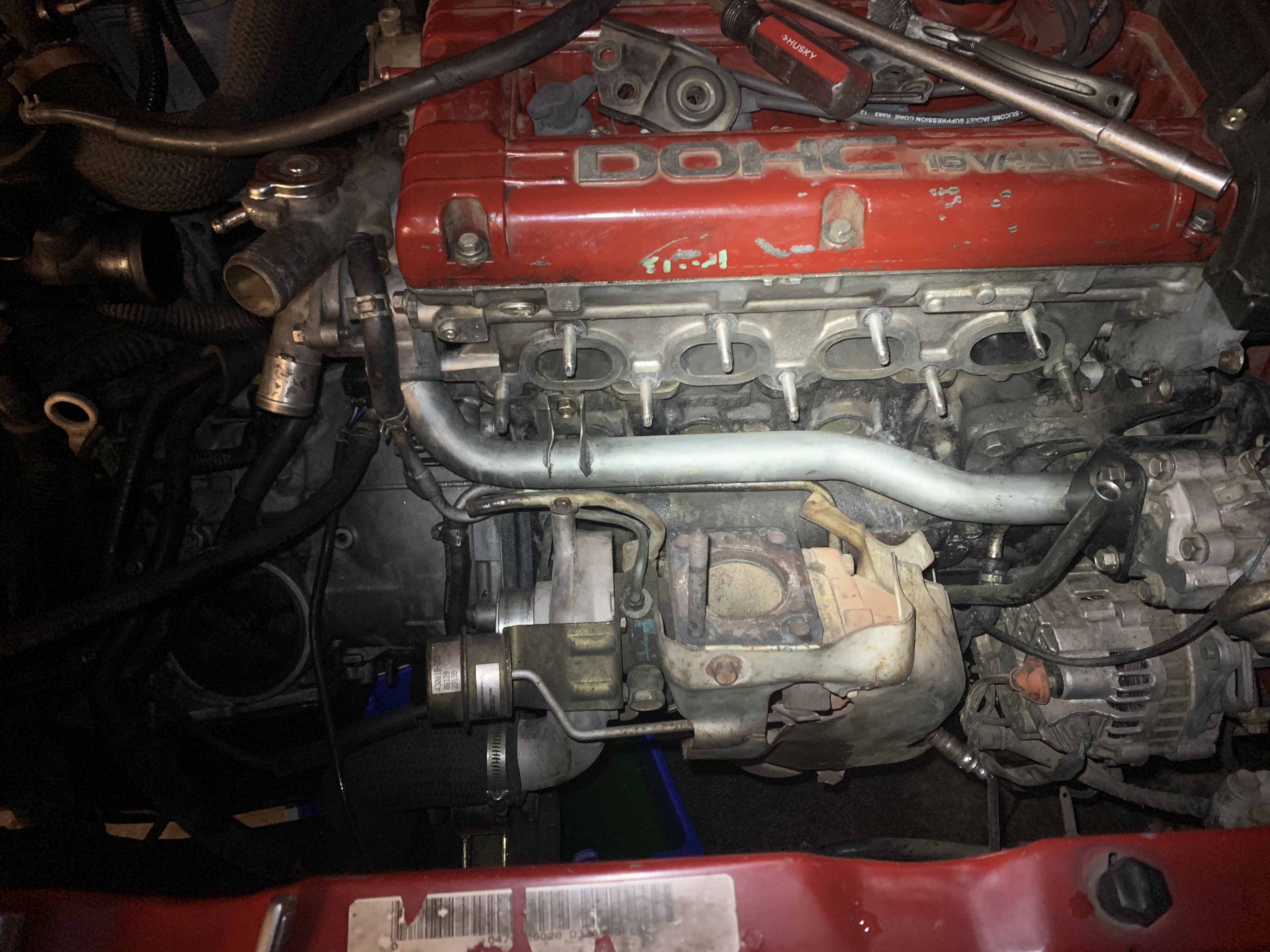 You can see the leak it used to have between the head and thermostat housing.
I know, I fixed the head gasket, but it kept leaking from that area,
So I will get the housing off and sand it to straight up. 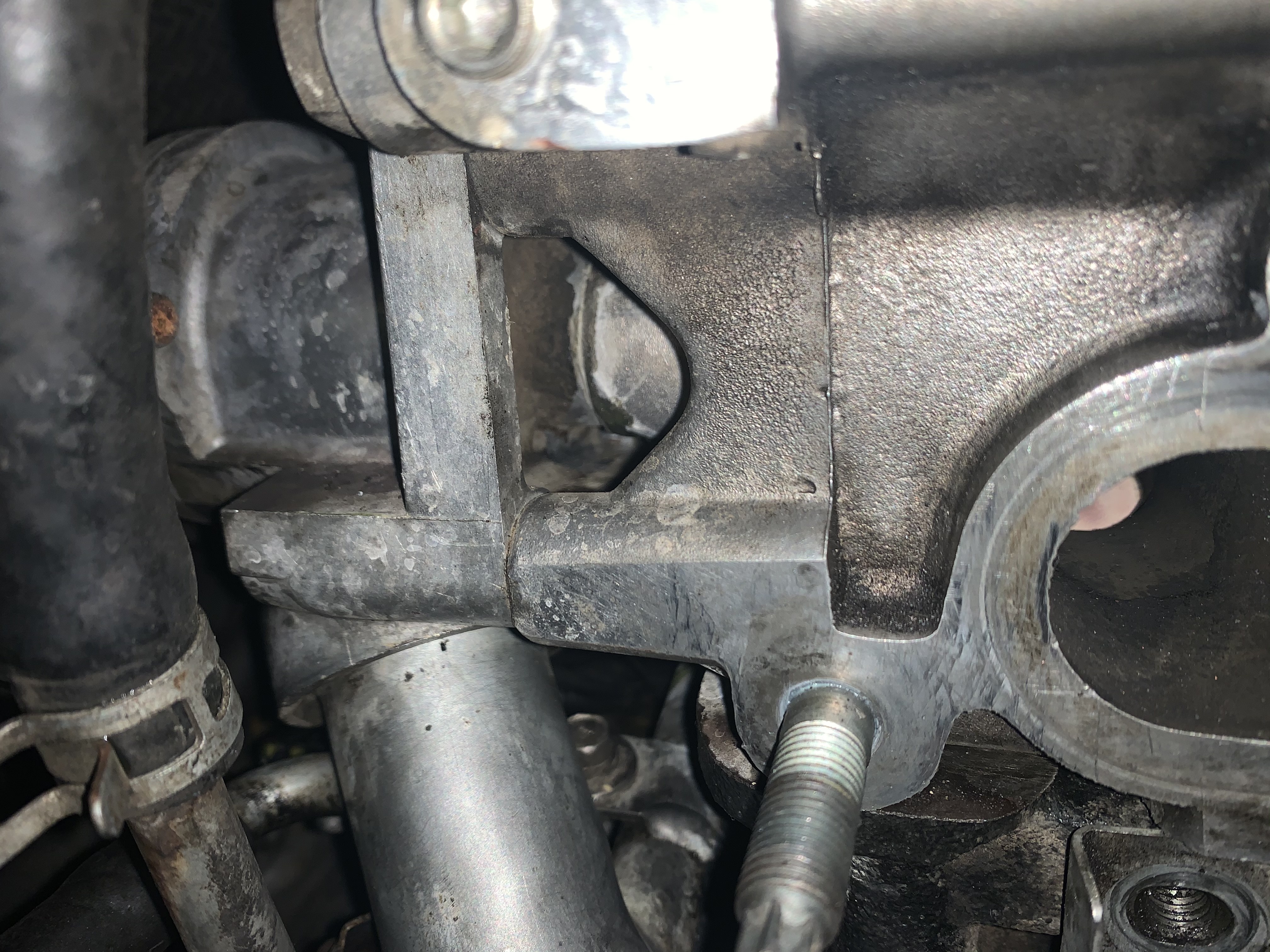 Here is the way it was before the cleaning. 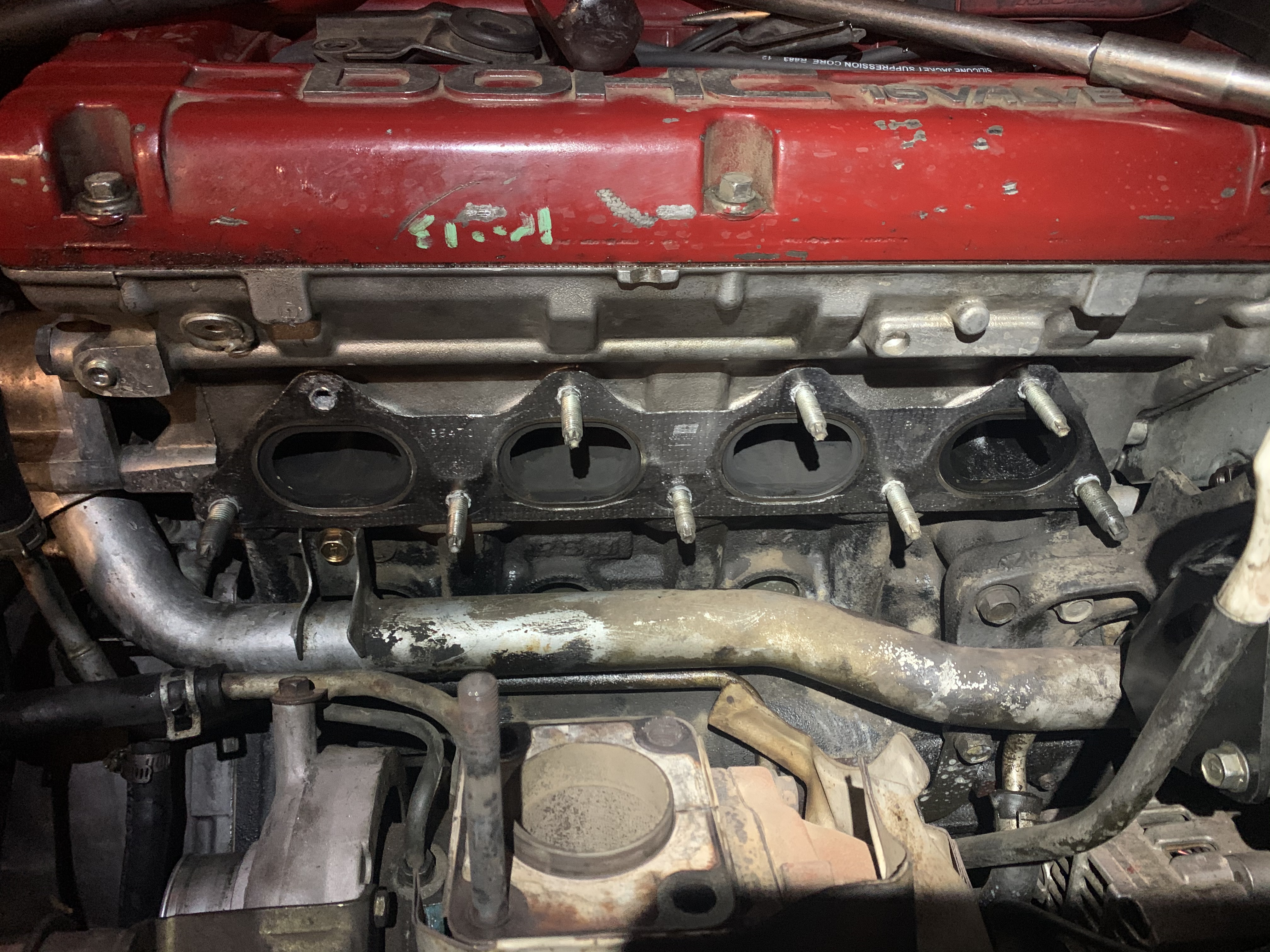 I seafoam it from the factory boost nipple, at the intake which is light up to #1 Piston.
I couldn’t rive it up for a longer period of time to remove everything, BECAUSE

The fire department came thinking there was a fire in the hood, so we all were looking to see where the fire was at, Yea yea Yea, Even me knowing it was my freaking car, I had to let them know I didn’t know where the smog was coming from.

Good no one was outside when the car was smoking and when everyone came out to see, I had the car off, so after all that happen, I couldn’t turn on the car anymore, so that’s why I start tearing it down.

Lol. It’s like that on video where the cops came to a speed shop thinking there was gun shots when it was a turbo civic on the two step.
92 awd 6/4 68hta V2 Ecmlink V3 (of course)
Built & Tuned by
Tony

Lol. Yea pretty much like that.
It was helareis. 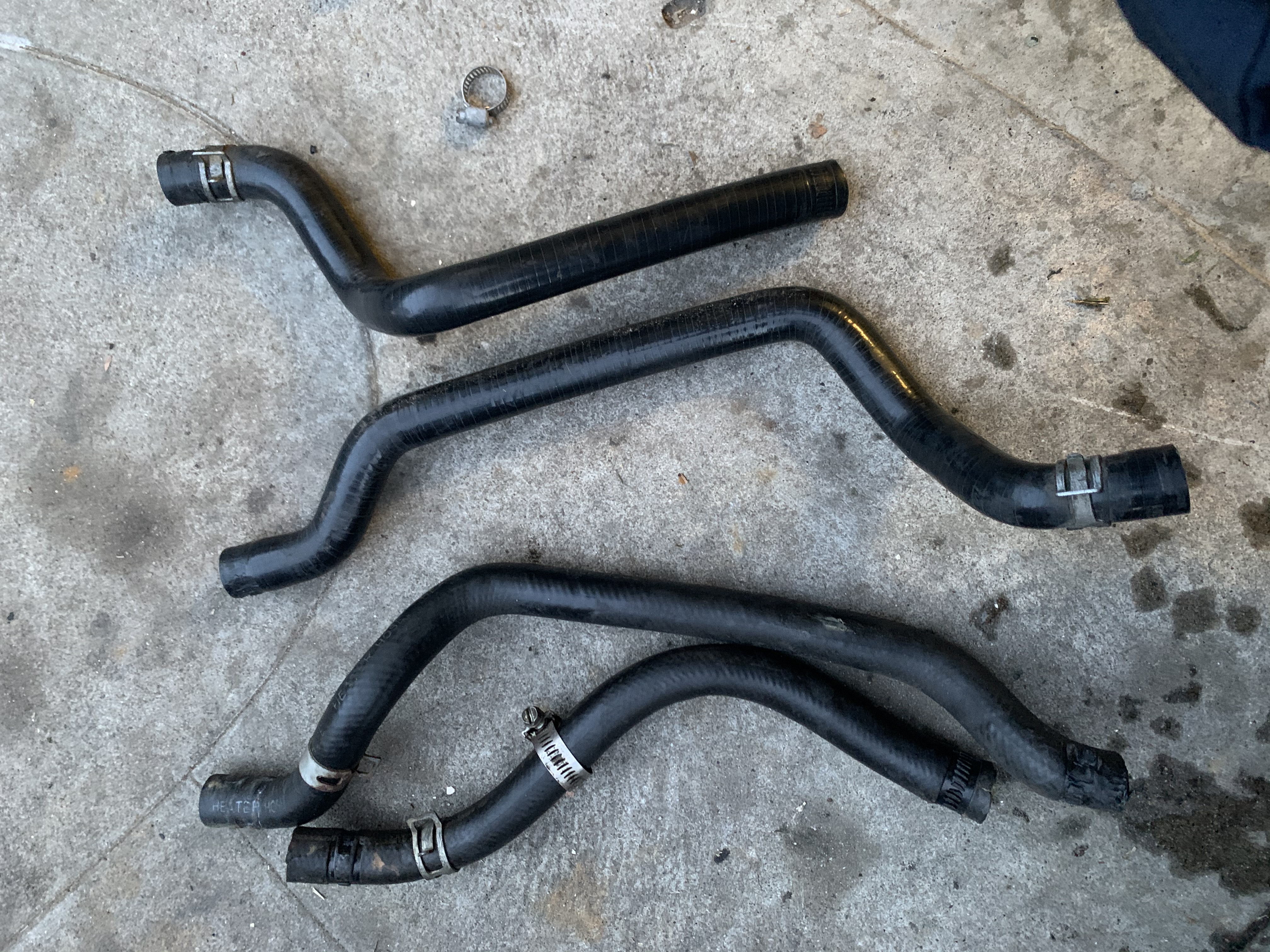 We put everything back and shoot to the smog station.

lit pass like batter. Now with all the exhaust leaks fixed it is running much better.

Well, I put the stock ECU back in there to put the EPROM in my weekend car, the car drives super with its original ECU.

Here is a proof of the squishy noise 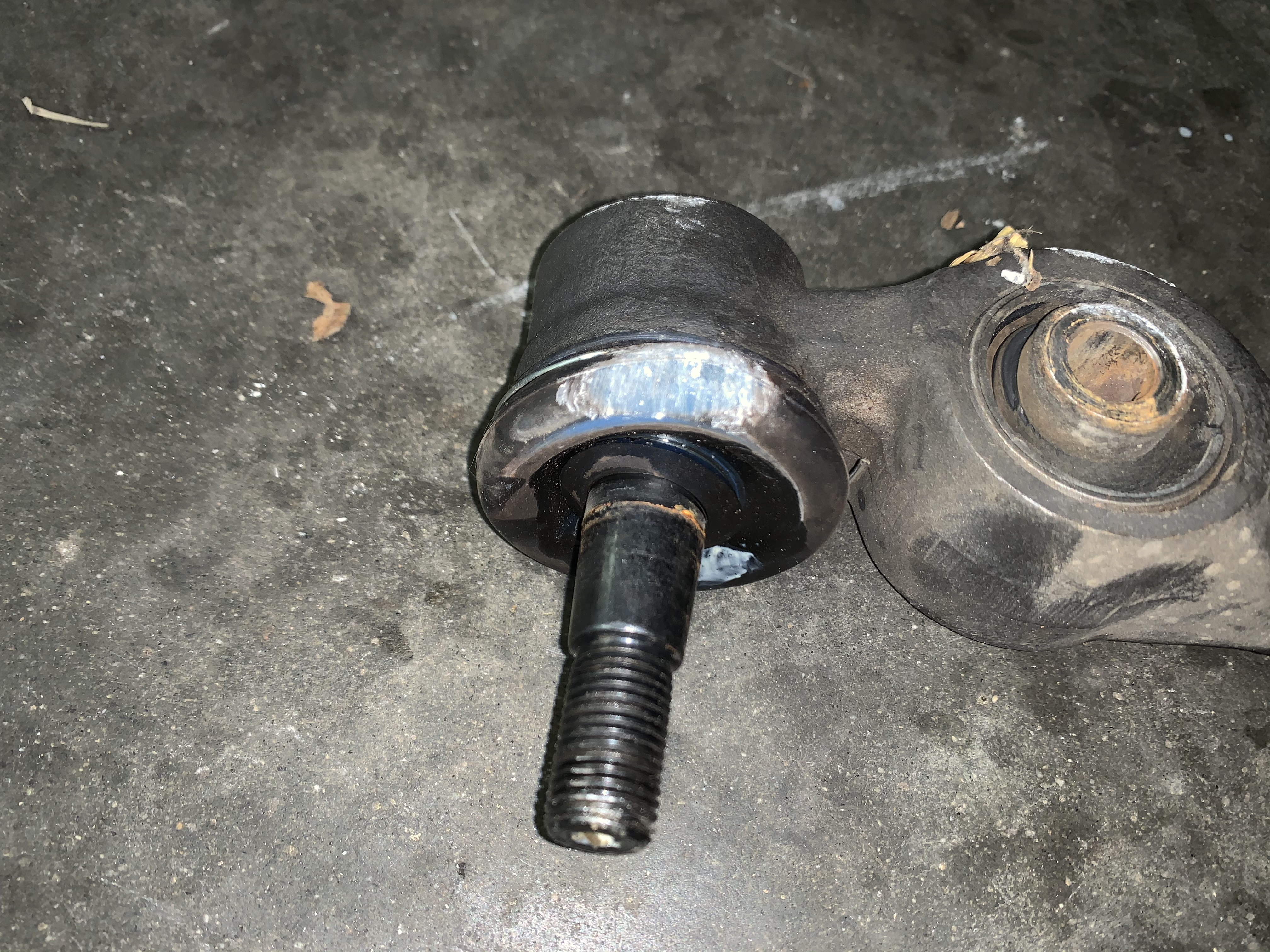 I replace both, upper arms with ball joints and lower arms from the weekend to the daily.

I forgot to mention, the car came with no battery tie down, the bolt was Brocken flash on the tower, so I drill a hole into the bolt and threaded.
The Brocken bolt has achico seat which it has much meat to be able to drill it and thread it, this way I can use a short bolt to tide down the battery bracket.

Here are some pics to describe what I mean and hope it helps for others in this situation.

This is by no means the best way to fix it, it’s just a bandaid. 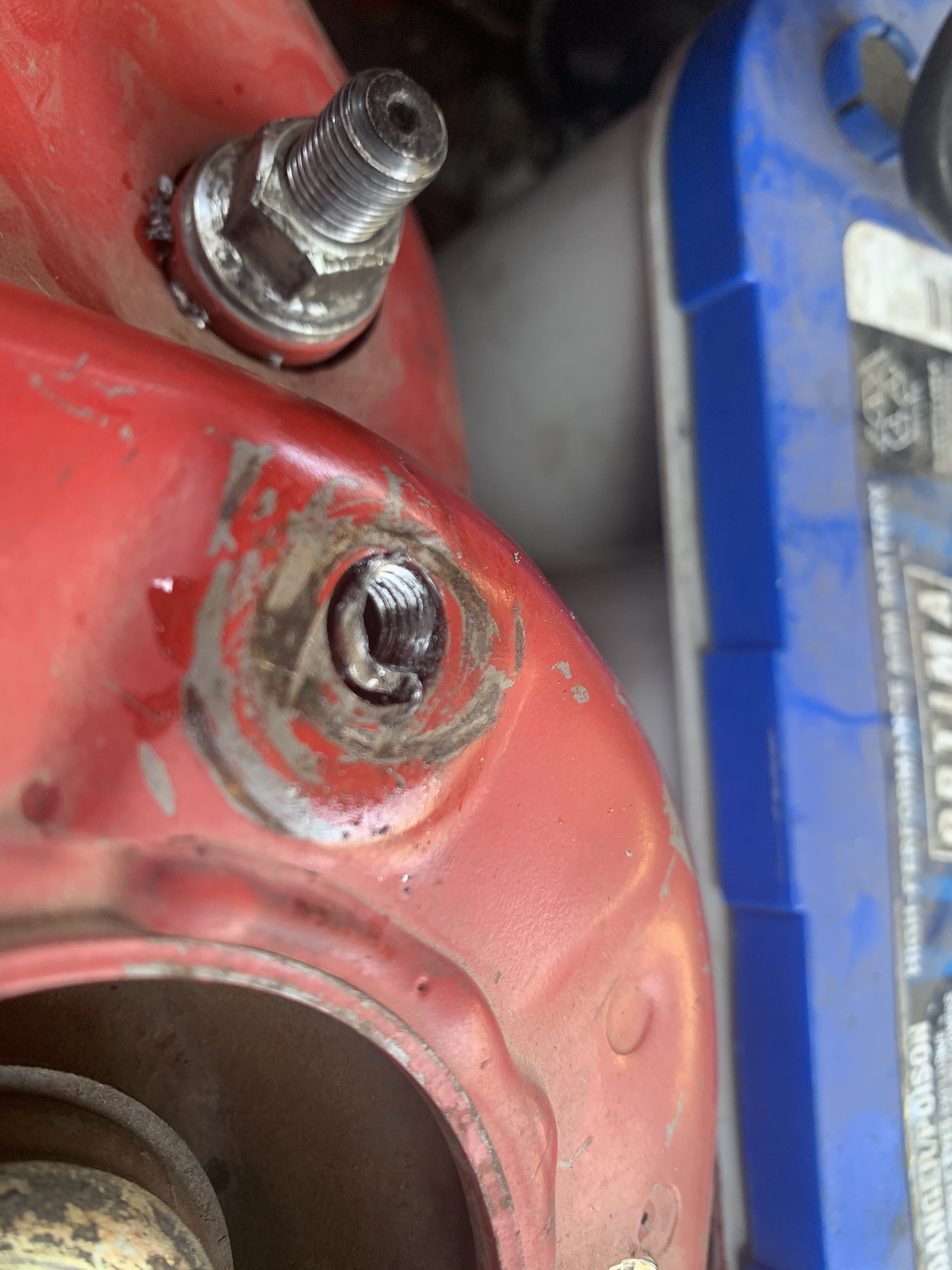 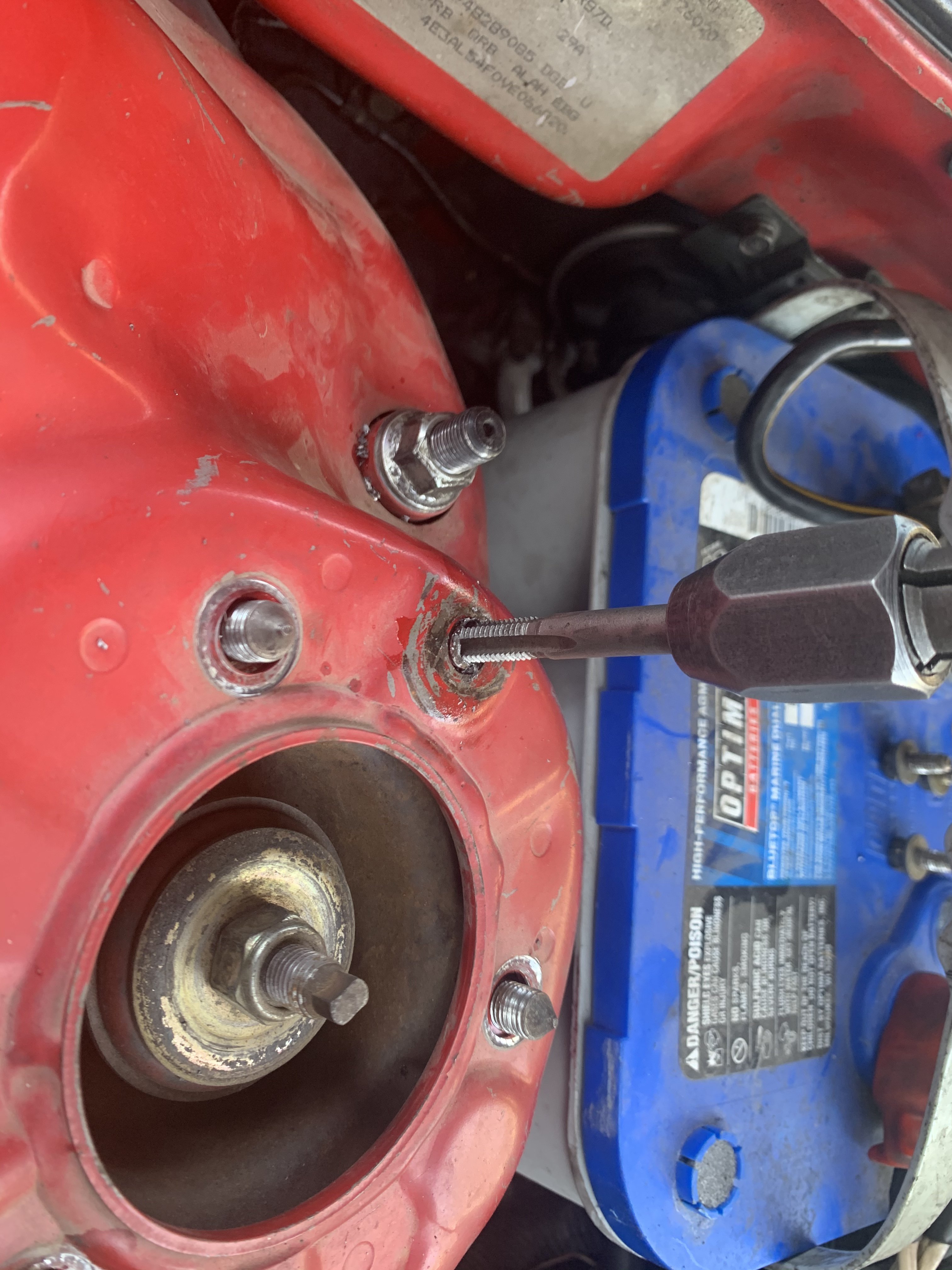 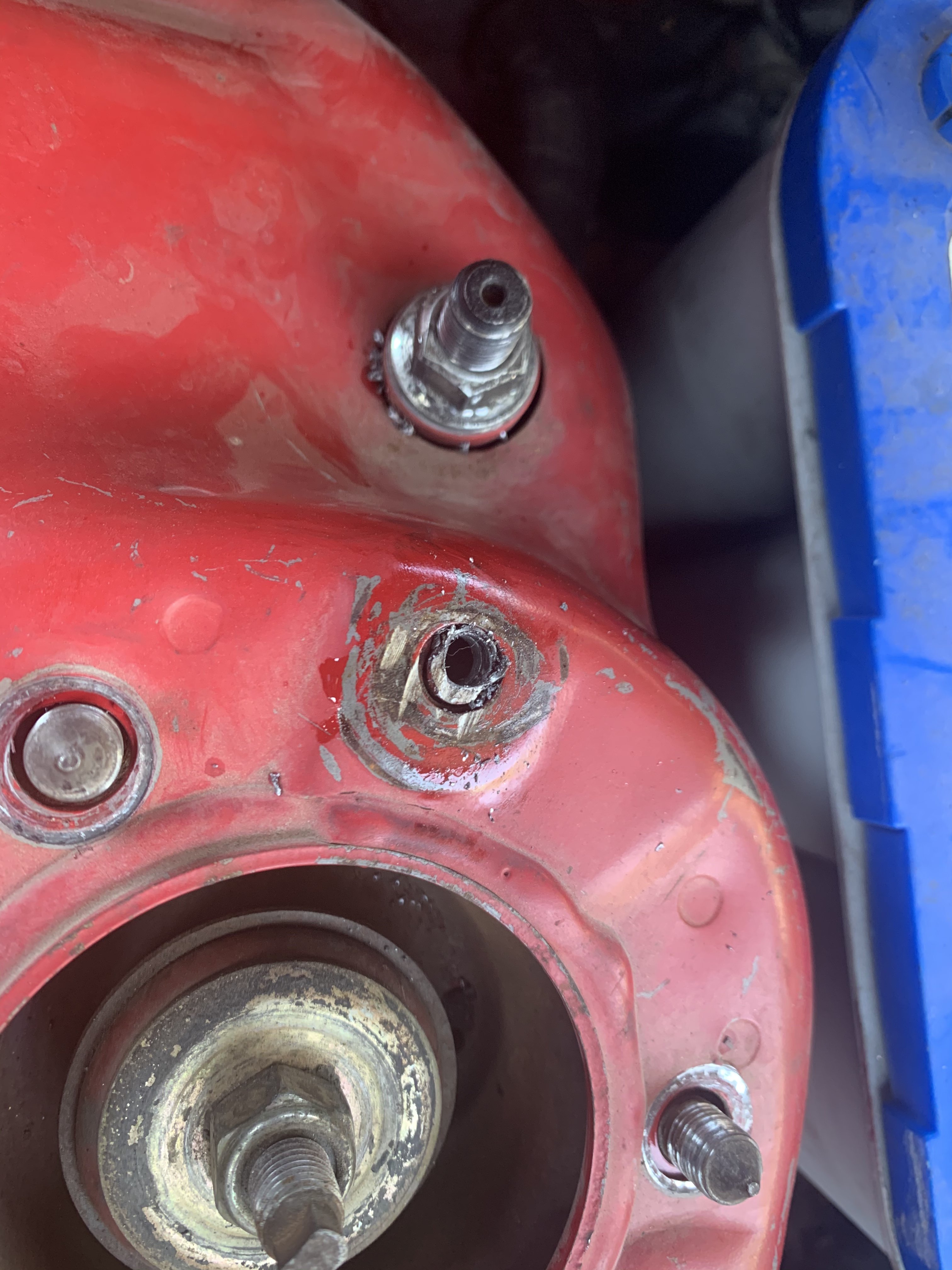 The car came with some rust in the cooling system, I’m so picky when it comes to rust, so I add additive to remove the rust and couldn’t be more then happy with the results.

I removed the thermostat when did the cleaning to ensure full flow at all the time so the product can perfore better and remove the best.

You can see there is almost nothing of rust so in the future when I remove the complete engine and transmission for a full complete gasket replacement, I will do another flush to the system to ensure there is no rust. 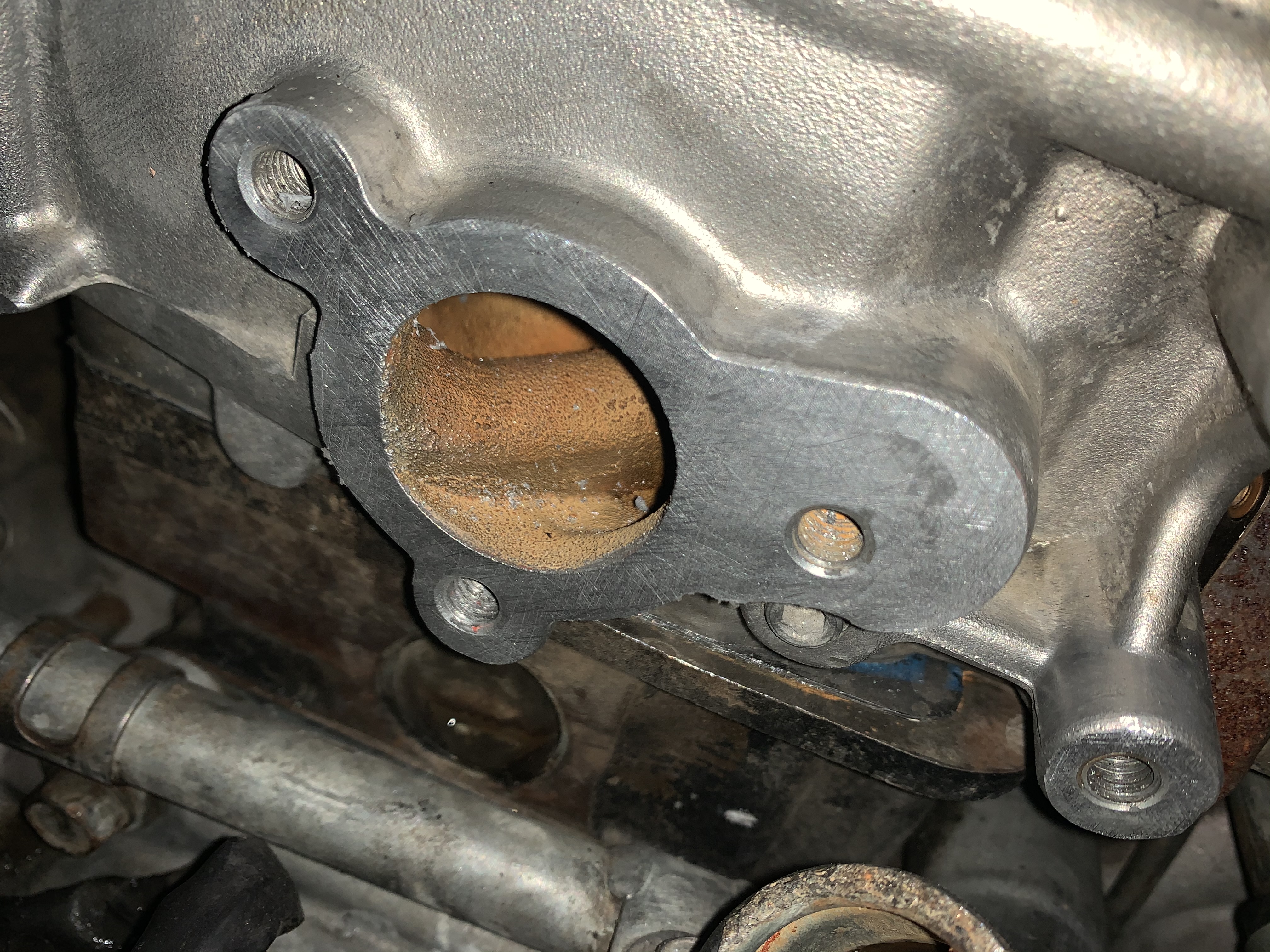 The system was nasty compare to my weekend DSM, where you can see bare metal but never rust in the inner sides of the pipes, housing etc.

I wish the PO left the tie down off because the bolt broke. Instead they just drill a self tapping screw. It took me 5 minutes to remove the broken bolt and now there’s just a dumb hole. Lol 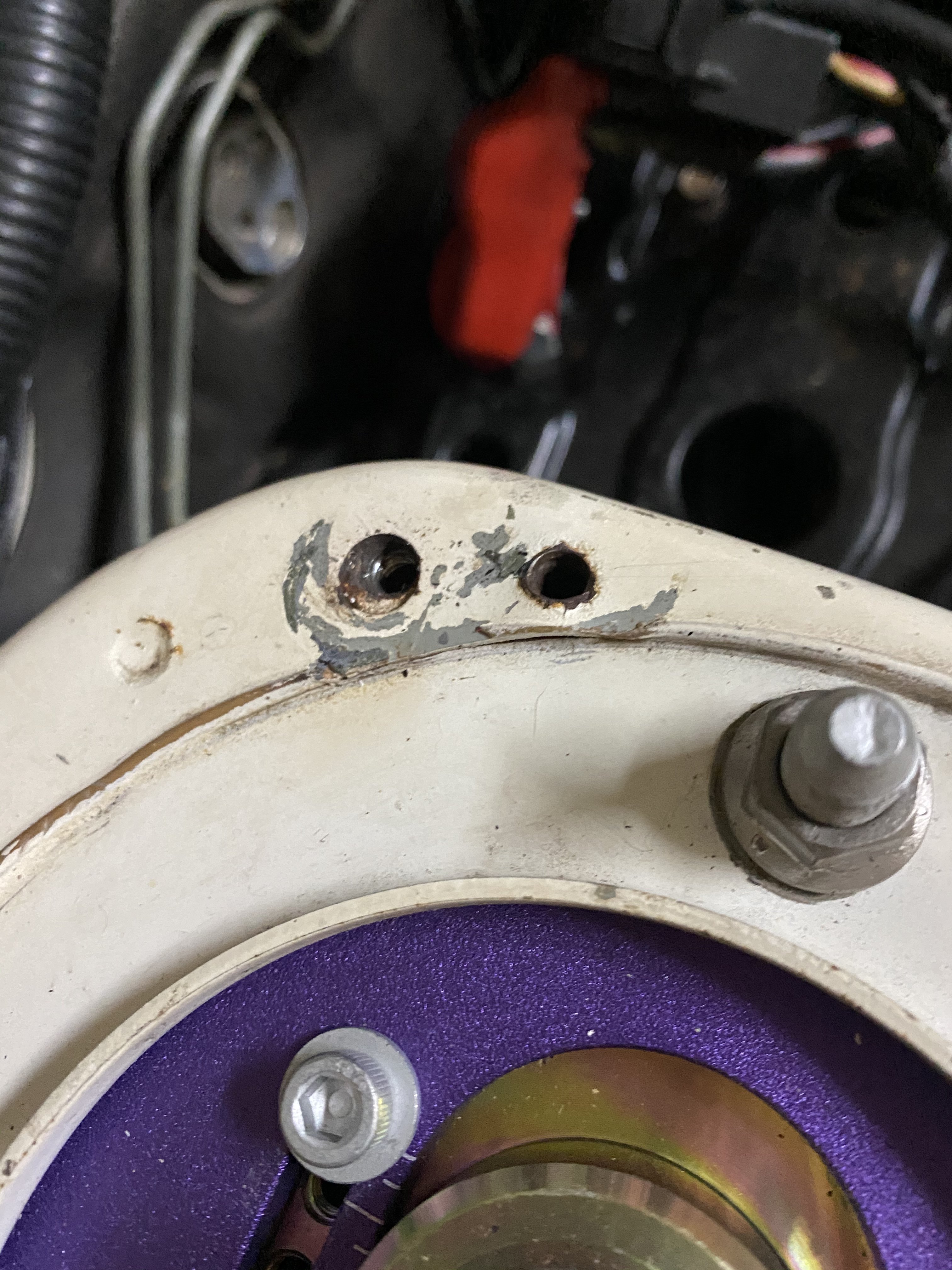 Lol, yea, it looks like you weren’t that lucky.

I will update later on, with the black dash replacement.

1997 Eagle Talon TSi AWD
Street Build
You must log in or register to reply here.