After a year or so of poor performance/diagnosing the wrong thing(s), I found that the timing belt job I'd outsourced to a "reputable" DSM shop had been bothched.

The below is a quick and easy way to field test that your timing belt was either not installed correctly, may have jumped a tooth or even test that the harmonic balancer (e.g. Crank Pulley) has separated (but not enough to crush valves).

1. Put car in neutral and remove the plug in the lower timing cover shield to expose the ½" hole in the crank pulley.

2. Remove the #1 sparkplug and insert a long screwdriver into the plug hole making sure it bottoms out.

3. Using a ½" drive, turn the crank pulley clockwise (very important) until the screwdriver is at mid dwell at TDC (e.g will pause a bit at it's highest point.

4. Now look at the camshaft sprocket timing marks. If they are at ~9 o'clock Exhaust / 3 o'clock Intake, continue to turn the crank sprocket another full revolution (cams turn 90* for each 180* crank rotation) until screwdriver is again at mid-dwell at TDC.

5. At this point look at both the Camshaft Sprocket timing marks and the Crankshaft pully timing mark.

....&#8226; Camshaft Sprocket timing marks should be directly opposing at 3 o'clock Exhaust/ 9 o'clock intake and be in line with the bottom of the head/camshaft bolts (dotted red line in pic below).
....&#8226; Crankshaft Sprocket timing mark should be aligned with the "T" on the lower timing cover's ignition advance scale (dotted red line in second pic below)

Neither intake nor exhaust camshaft markes are aligned. Should be aligned with red line. 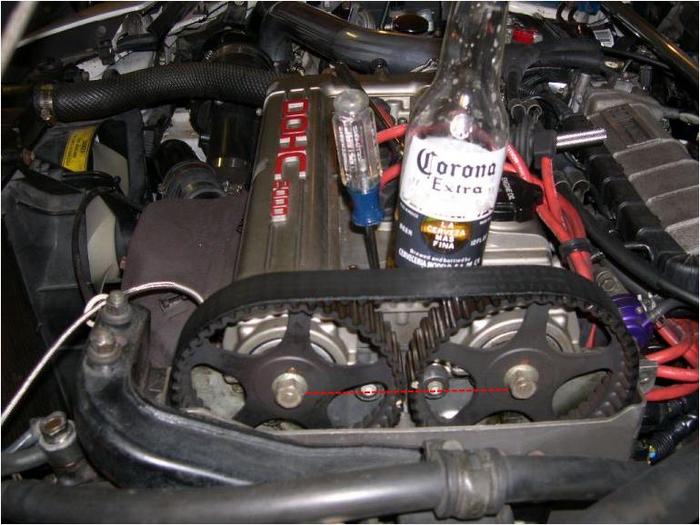 Crankshaft timing mark is at 15* BTDC, should be at "T" mark indicated by red line. 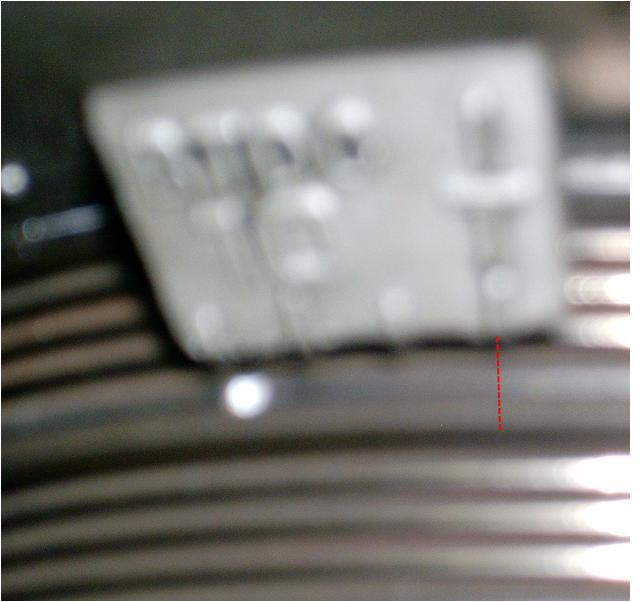 If either of the above are not the case, then you need to refer to the Timing Belt VFAQ to re/re the belt correctly and possibly replace worn parts (tensioners, crank pulley, belt itself)

1990 Eagle Talon TSi AWD
You must log in or register to reply here.

How to change your timing belt