1990TSIAWDTALON said:
Kiggly 5 or 6 pak front clutches, Translab 175 shift kit and a SmartShift 100.1 TCU, New end clutches while your there.
Auto shifter and cable.
You can probably just leave the clutch pedal assembly in the car if you want, not really a difference except it being in the way for the swap.
I don't think I left anything out but just shot them off the top of my head

Hell ya, I have been lurking kiggly's site because I know ill need an adapter plate for the 6 bolt in my 2g. Then ill need a 6 bolt flex plate because I only have the one for the 7 bolt.

I was told this car has a shift kit in it, so I imaging its the Translab 175, but I will do my best to confirm while its all apart. I also see that IPT has a spring kit to complement it? Anybody used that?

The front clutches seem really reasonable and I will need to research whats best for me, but I haven't looked into the SmartShift or any TCU yet. Thanks for the heads up, ill start reading about it.

I have the auto shifter and cable from the auto awd, and also the pedal assemblies. Basically everything from the transmission to the wheels has to change, correct? Trans, t-case, front axles, driveshaft (in my case), rear diff, rear axles???

I wont be able to use my DSS driveshaft anymore, because I dont have an upgraded 300M t-case for an automatic. I might just throw a frontline fab brace on the stock one I have with new bearings and see how it goes.

This is such a bummer
* I am not a reliable source of anything.

A Front Line brace like we use for the sticks would be a real good piece to have. I have Andrews stuff on my stick car (that us STILL down), but I have a Magnus bearing support plate on my auto car and it is a beefy unit.
Sorry I had forgot about those things but YES for sure. FF rear dif cover too. I left out all of the driveline stuff so yep that all has to just swap over.
Marty - still plays with BLOCKS!
YouTube - Marty Wilson, Wilson Engine Shop
https://www.youtube.com/channel/UCwfCcimqz3w4BSVZ1fthoHQ
Instagram - wilsonracingandengineshop

It took a couple days for it to sink in how much this sucks. I don't want to auto swap, and I dont want to just break another stupid evo 4th gear. I want to spend $7300 on a PAR gear set, but how the hell do I continue to justify spending so much on a car that is just for fun?

It really might be time to part out. Sickening to think that, but I really dont see a lot of benefit to spending $7300 on an 11-second car. that could be said for a lot of stuff I wasted money on in this build.

To go to auto id be looking at a couple thousand $ and it wouldnt be as fun to cruise around in. Do I want to invest in a car thats for track use, when I have never even ran on a track? It might be time to try and find a cheaper hobby all around. Building the EVO would be just as pointless as this project was.

Anybody want to buy my DSM collection? 2 AWD 2g cars and countless parts? Make an offer
* I am not a reliable source of anything.

What do you guys think they are worth? 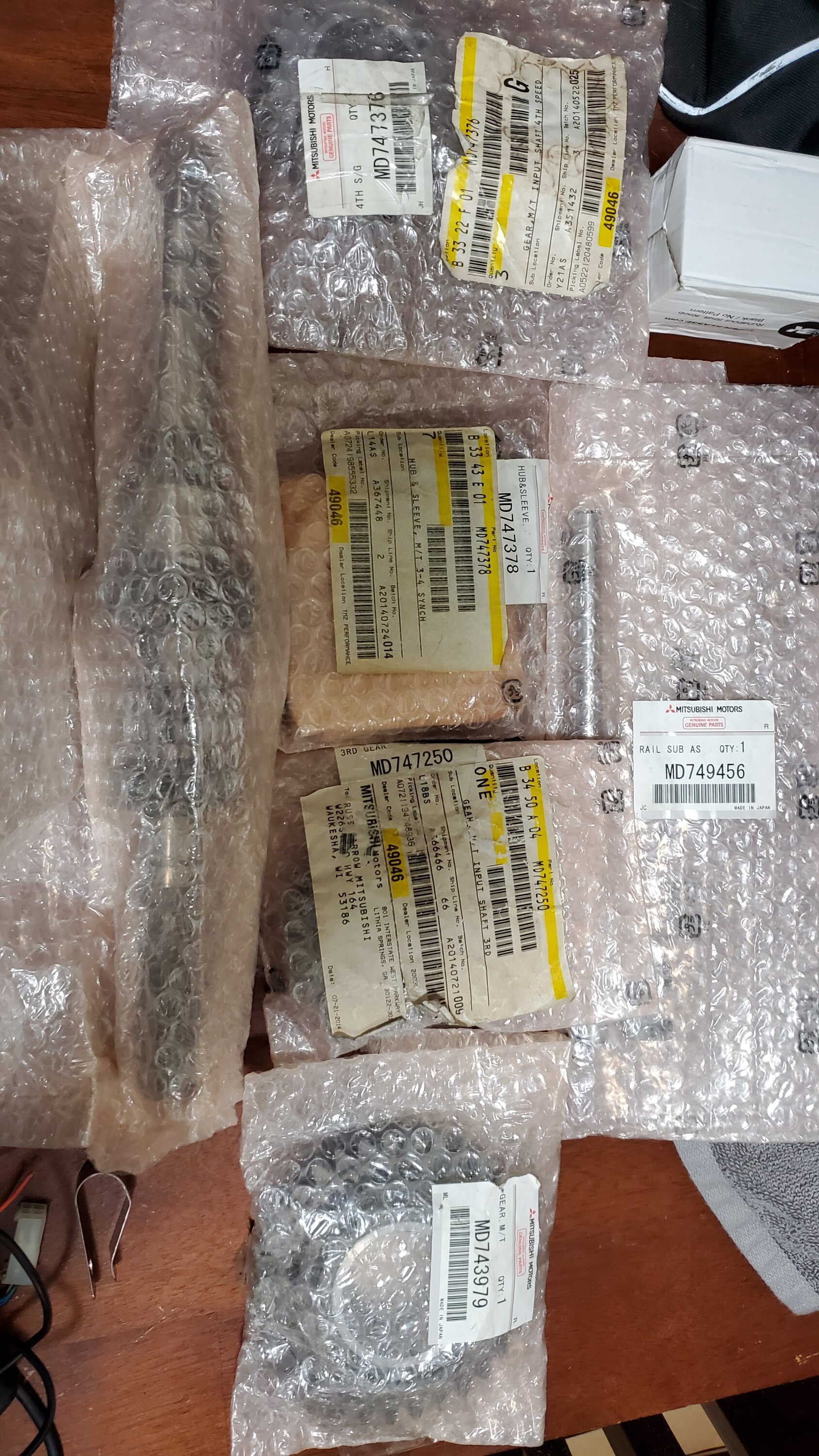 * I am not a reliable source of anything.

What do you guys think they are worth?

Dang, if I had a good mine or oil-rich family, I'd make an offer.

I'd say the parts alone are worth 2500ish given increasing rarity.

U can still get some of that stuff at Jacks. The input shaft and hub slider will be the big ticket items.

@NWHTanK can you still get them from jacks or does he just have them listed on the website? I am pretty sure the intermediate shafts are long gone, but he lists both (early and late) of those as well. I just tried calling but nobody picked up. Going to email jacks today about what they do and dont have...
* I am not a reliable source of anything.

I also picked up a spare 91-99 gear cluster. It has a worn 2nd gear hub/slider, and some wear on 2nd gear itself. Between those parts, and the ones in the trans that didn't die, I might be pretty close to getting it all back together.

That said, if I rebuild this with anything other than PPG, its not going on the HX40 car.

I might try to sell all my gears and auto swap parts and make an attempt at the ppg set, but I know I shouldn't.
* I am not a reliable source of anything.

Well I just bought 3rd and 4th gears. So let's see if the web site is up to date. With you running a 2.3 torque monster go auto or ppg gearset. If you want a 4 spider that will cost additional..

I hope they are, but I have my doubts. Fingers crossed for you. I already run a TMZ 4 spider and KAAZ front LSD, so no worries there. Id probably opt for the diff option with the PPG set and turn it into a 4 spider rather than run the spool.

Well with going ppg your going spool because of the straight cut gearset. So a custom 4 spider will be needed.

PPG offers an option of spool or billet center diff housing (which can be modified by Tim to use 4 spider gears). They are the same price (less tim's work and the extra parts)
* I am not a reliable source of anything.

So if you wanted you can sell your center diff, or use its parts ?

That's the assumption I am making, but you know assumptions...

I probably would just pay to build it new in the PPG housing, and keep the TMZ 4 spider for other projects. Who knows what the future holds, and its a really nice unit.

Its all speculation until I make some decisions.
* I am not a reliable source of anything.

I am going to keep thinking on it a bit, but right now I am leaning towards selling all the evo 2 parts that are still good in the trans right now, except the evo 2 5th gearset (I love the hwy rpm). Then sell all the evo 3 new parts I have. Then sell the Auto AWD either as a running car or parted out (has some rust underneath but clean strut towers).

Between all the oem trans parts and the auto awd, it would cover a significant portion of a PPG set. The PPG set makes the most sense because it would allow me to use my Kaaz front diff, boostin transmission output shaft, and my built t-case w/ 3.5" DSS driveshaft. If I go auto, none of that can be used...

I would prefer to keep hoarding all my parts, but I think going to PPG is the smarter move long-term if I want to keep this car indefinitely, and I cant justify paying PPG money unless I unload something...

I don't expect the car to be on the road again this year... even if I auto swap it until I can get the PPG setup built, I dont think I will be finished before first salt.

Please keep throwing in your estimates of what those parts are worth, I am trying to figure out what I would ask for them. Now the same goes for the AUTO AWD dsm in my profile. What could I get for that thing?
* I am not a reliable source of anything.

@Jays99Spyder To use the AWD stuff off an automatic, you would have to convert to automatic as well
* I am not a reliable source of anything.

Had some time to digest this all. Not sure I will be getting back into these cars. I spent more than half of my life messing with them, and it might just be time to move on.

The car died with e65-ish in the tank, so I am going to drain it and add straight gasoline this weekend. Ill idle it a bit to make sure the ethanol is gone and add some iso for long-term storage.

Sad, but right now I don't even really miss this project
* I am not a reliable source of anything.

That really sucks.. For what it's worth I have enjoyed watching this thread. Sometimes I think if we would have stuck with staying close to stock we would have less problems but as dsm heads I know that's hard.

Thanks for the sentiments gents. I am actually more depressed that the "drive" is gone for me now. Its faded before, but always comes back stronger with more money in my pocket. This time around I have actually been avoiding my garage entirely, just so I don't have to see the broken car. I might actually still be stuck in denial (by avoidance) -

- actual grief.
* I am not a reliable source of anything.

2008 Lancer Evolution MR
You must log in or register to reply here.