Near of Leipzig, Europe

Is there still an original screw on your car?

Next road trip must go to London!

That is awesome man.

Fuchsig said:
Is there still an original screw on your car?

Next road trip must go to London!
Click to expand...

There are a few still

but honestly not many left i dont think. Haha
BOBBY

Thanks all for the kind words.

Im going over the pictures today and sunday night I shall post up pictures of the car and its new vision, bodywork etc.

Its not 100% finished though just to note. I still need to finish off the front splitter and tidy up some bits of the car that did not come out so well
BOBBY

So as previously I had rust issues and I resolved them with a lot of work and redesigning a lot of the bits also reinforcing things to even going tubular in the front end, this was a huge task as my plans were both tricky to do right then and also think of the future plans of the car so its a hard task and took a while to think about the best plan of action.

I wish to say that most of it is good and I do think I have a pretty good setup going forward with the choice of changes later on. the only exception to this is later on when I do upgrade turbos its going to be a bit tricky to fit it all in with the duct space so this is something I could not do right now.

While this was all going on I had to start on the bodywork and for about 6 months I was researching bodywork in racing from DTM and touring cars and super GT to super cars and converted racing versions to see what bodywork was good for the shape and flow of the DSM. The 2G is a nice rounded bodied chassis so I had to work with that to keep it going but I also wished to make sure it had a good edge to look aggressive also at the same time!
Without air data of the chassis I found what I liked and worked with what had been proven to work for other people and their tests show good results so it was a way forward for me. These designs that have worked for many previously just with different tweak's here and there.

Mine is a fairly simple design but was very tricky to execute! I don't have moulding skills nor the place to do such huge tasks and fiberglass work is not something I do a lot of. So I did have to keep it fairly simple in fabricating it but that turned out to be troublesome at the best of times! Some bits were easy and some were so tricky I had to redesign and remake multiple times to get it correct which took time, more money and wasted metal but it was a huge task and I had to learn at the same time I was doing this!!! A few times I was able to figure out a problem before hand while just sitting back and pre designing it in my head working out HOW TO do this and that etc etc.

So without going into a spiral effect of details I will just share the car and I will do a post in stages for you on each part and reason for it all etc etc!

here it is in all its glory! 90% finished is my 2G Time Attack AUTO race car build DSM. 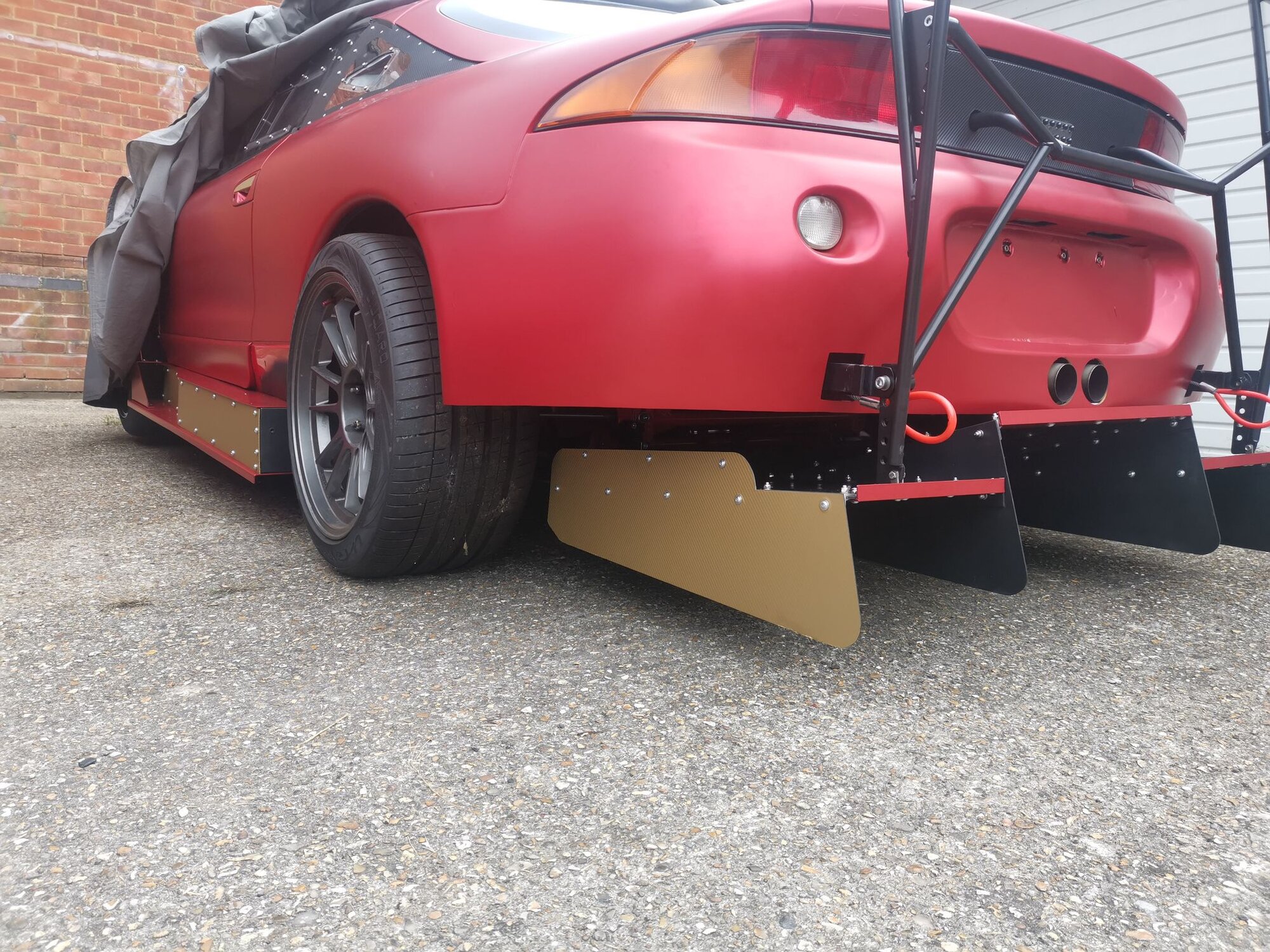 What material did you use for the fenders?

Maximuscr31 said:
What material did you use for the fenders?
Click to expand...

All aluminum, i will be going over it all bit by bit to explain it all
BOBBY

Im going to start with the obvious part that makes this now stand out from everything else and thats the bodywork!

This was a huge task and tested my mind in design and forward thinking to many levels, But I had a vision and based upon many books I read and researched on the web, I found something that I liked that seemed to work well for the bodyshape and for the end result I was aiming for. If I had loads of money then it would be done to a much higher standard and even moulds made but this first step is A STEP and one I can work from here moving forward!

My inspiration is of course Time Attack but not just that but DTM also as the bodywork for that is crazy and awesome all wrapped up in one. so with this I set forward to a task and a half with this.

SO..... with that said, The entire body panels are now made from aluminum sheet, they were bent, formed, rolled, welded, riveted, cut up, scrapped, remade, sometime hammered then etched and lacquered for a gloss clear coat for the wrap so a fair amount of work involved. planning it was was tricky as I had to start at 1 point and move forward with this and design that first! so I started with the side skirts.

Side skirts had 2 redesigns due to not being able to do my original plan of 2 piece sections so had to go to 3 in the end for ease. not a problem but I wasted a good chunk of sheet here so Thankfully I had enough spare incase this happened. This was also a structural point so needed to be strong to take weight and support the rest PLUS the sills needed to support this also. my trick here was using riv nuts along the whole length of the sills and then had the metal bent in such a way that it rested along ALL of the remainder of the sill to support its own weight, this was critical to get right as a starting point as if it did not support itself then the rest would fail!
the top was now its own part due to double curvature and while this does also self support its not nearly as much as the bottom part but as a whole it boxes the lot in so creates a strong support by design. ( I can stand on this and jump on it and it barely move ) 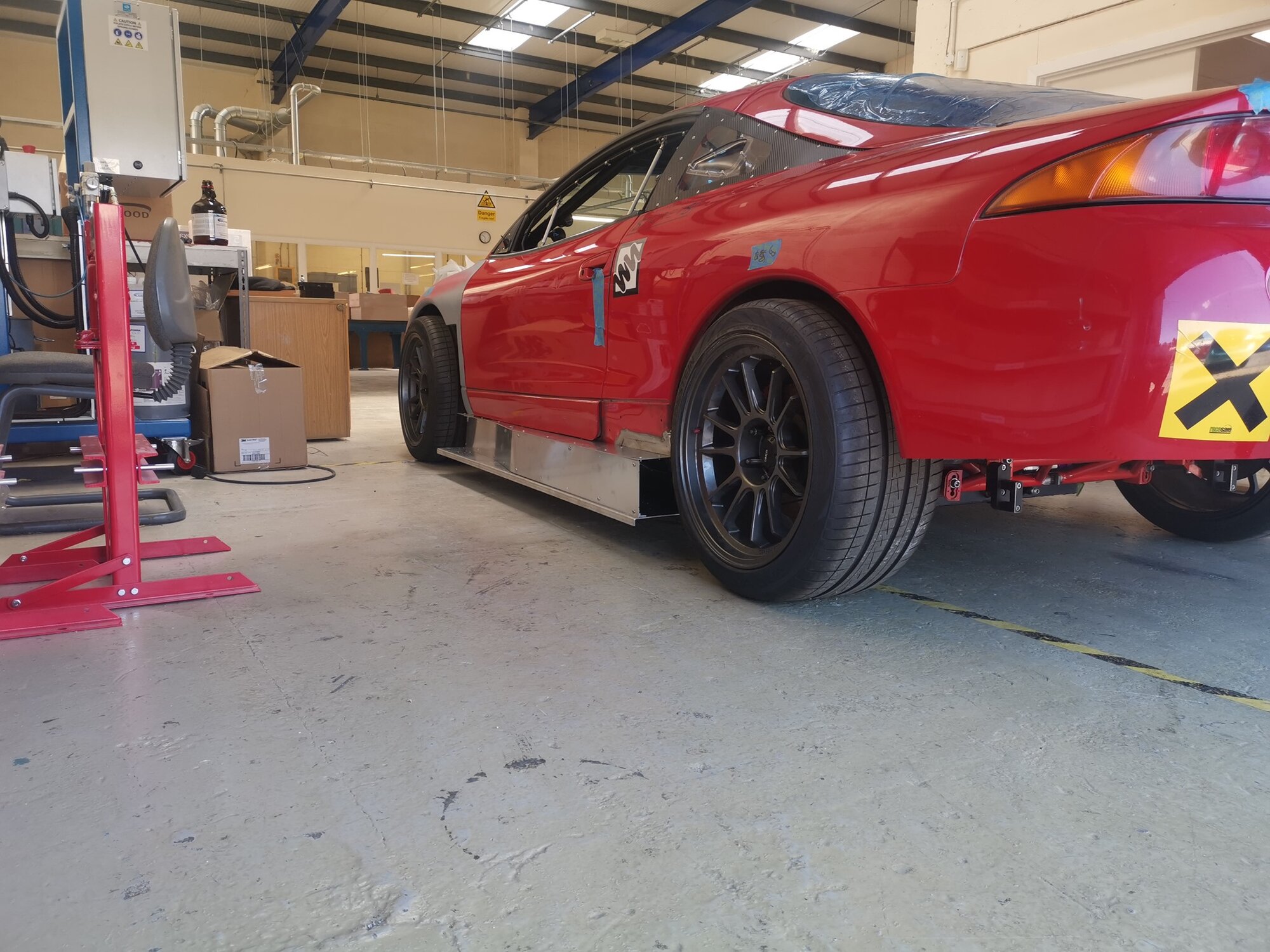 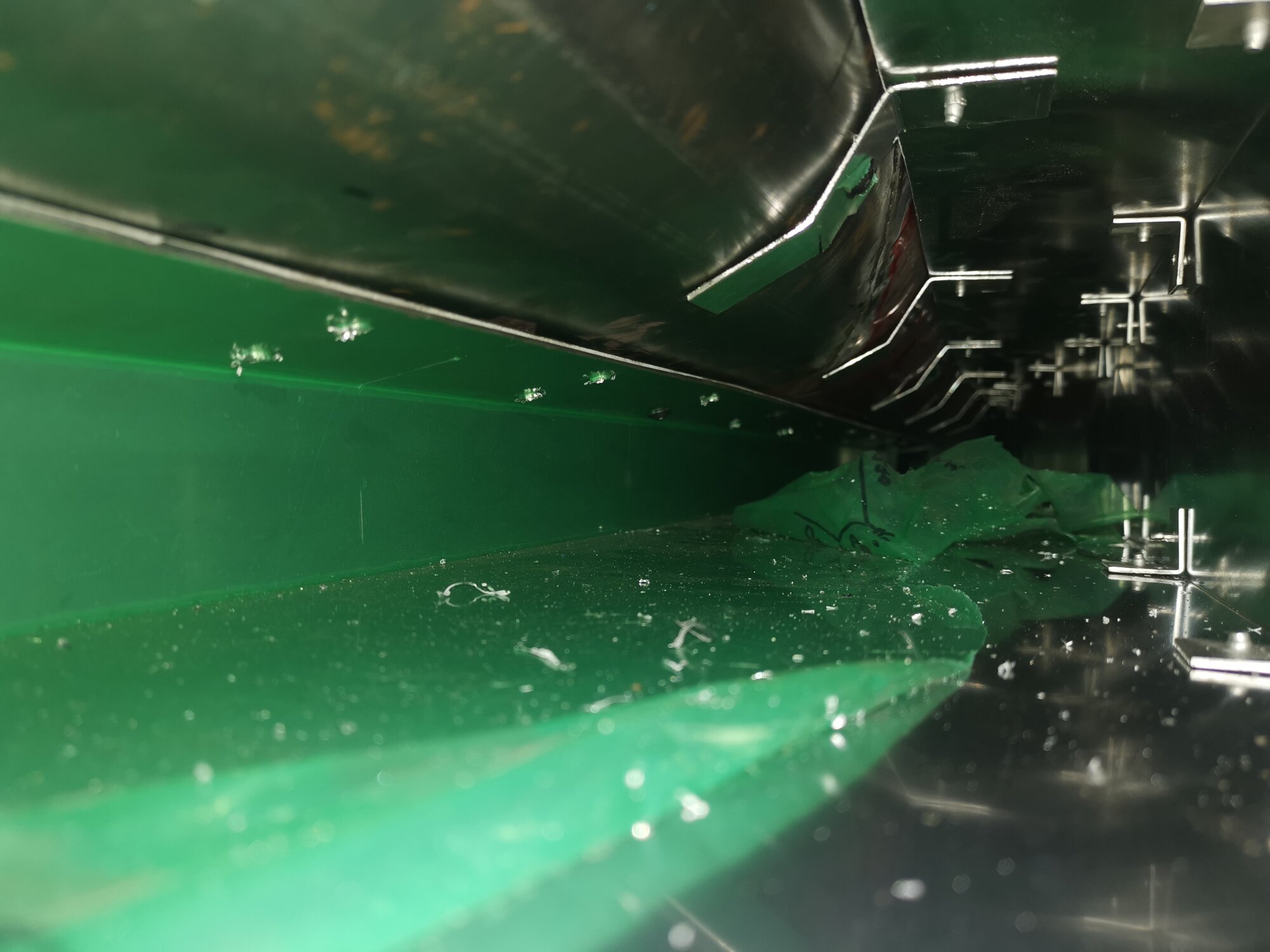 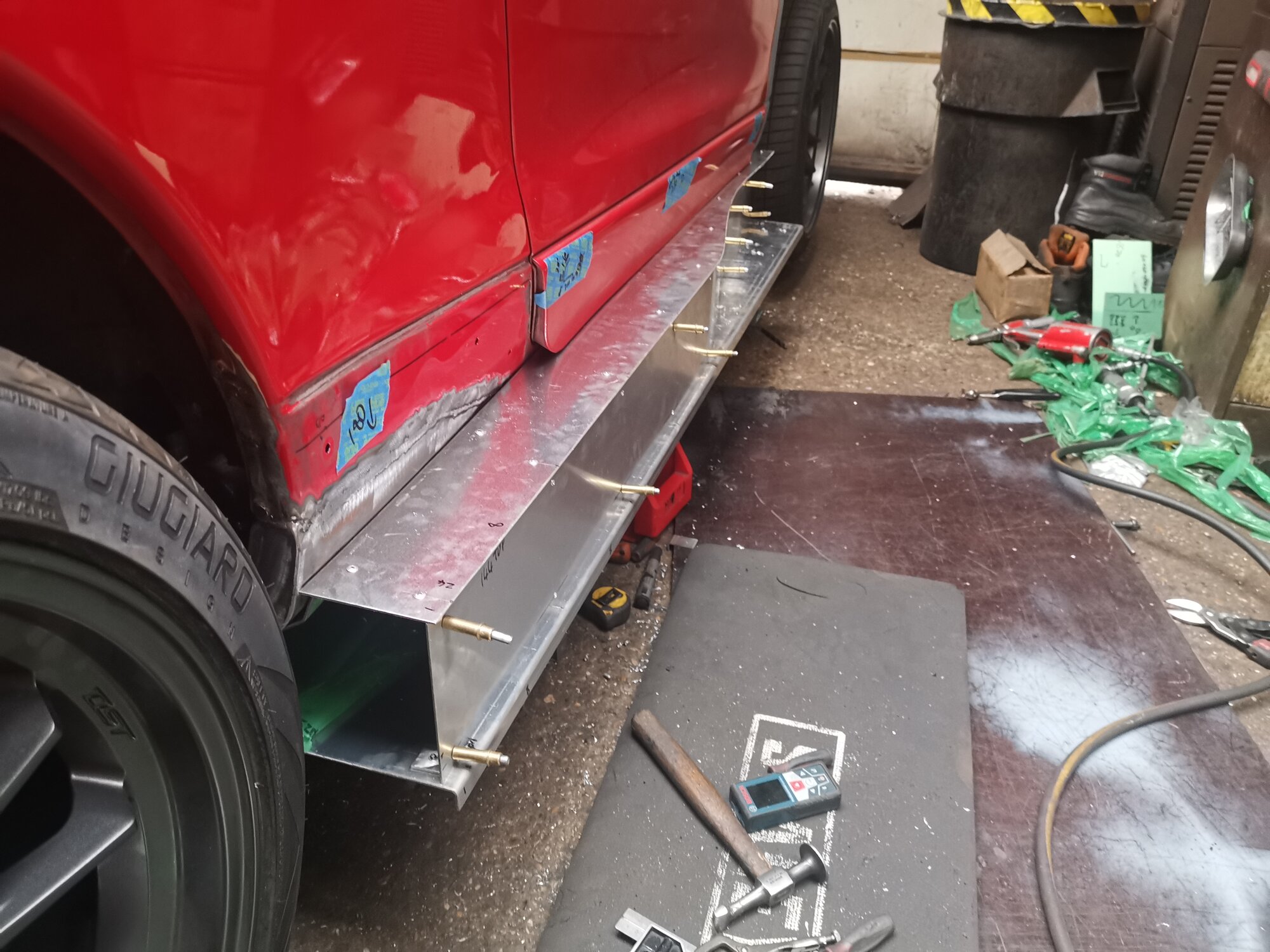 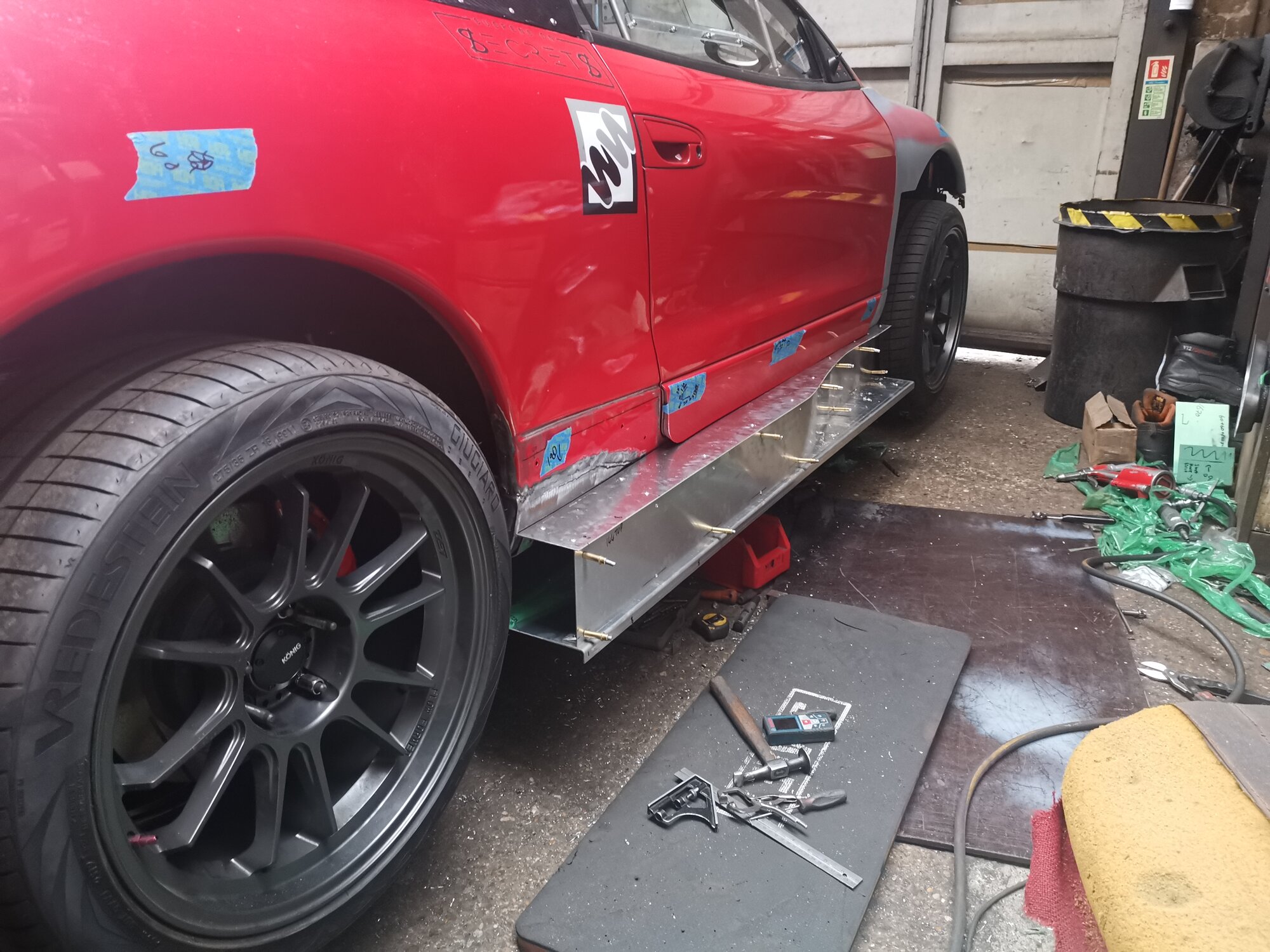 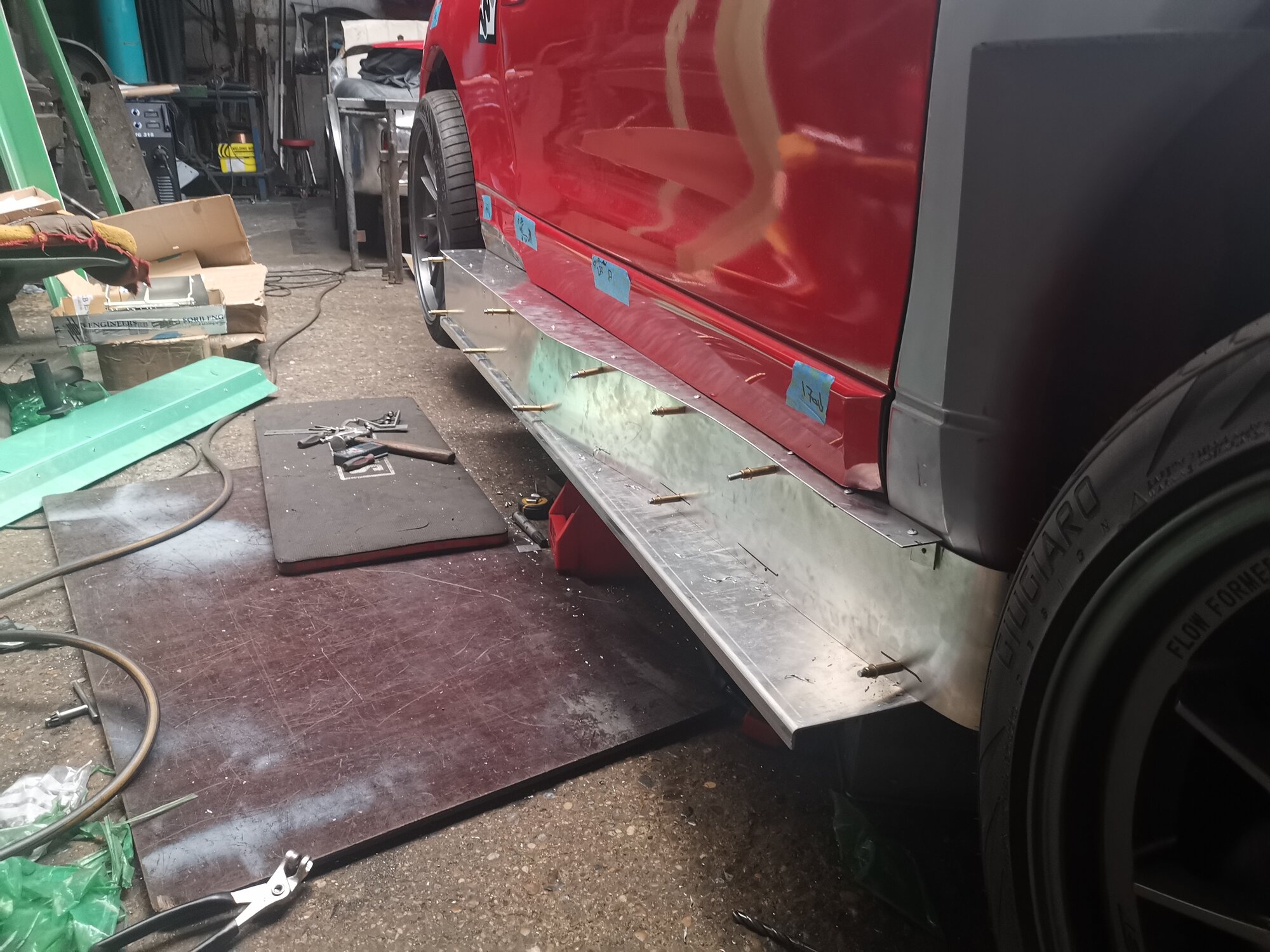 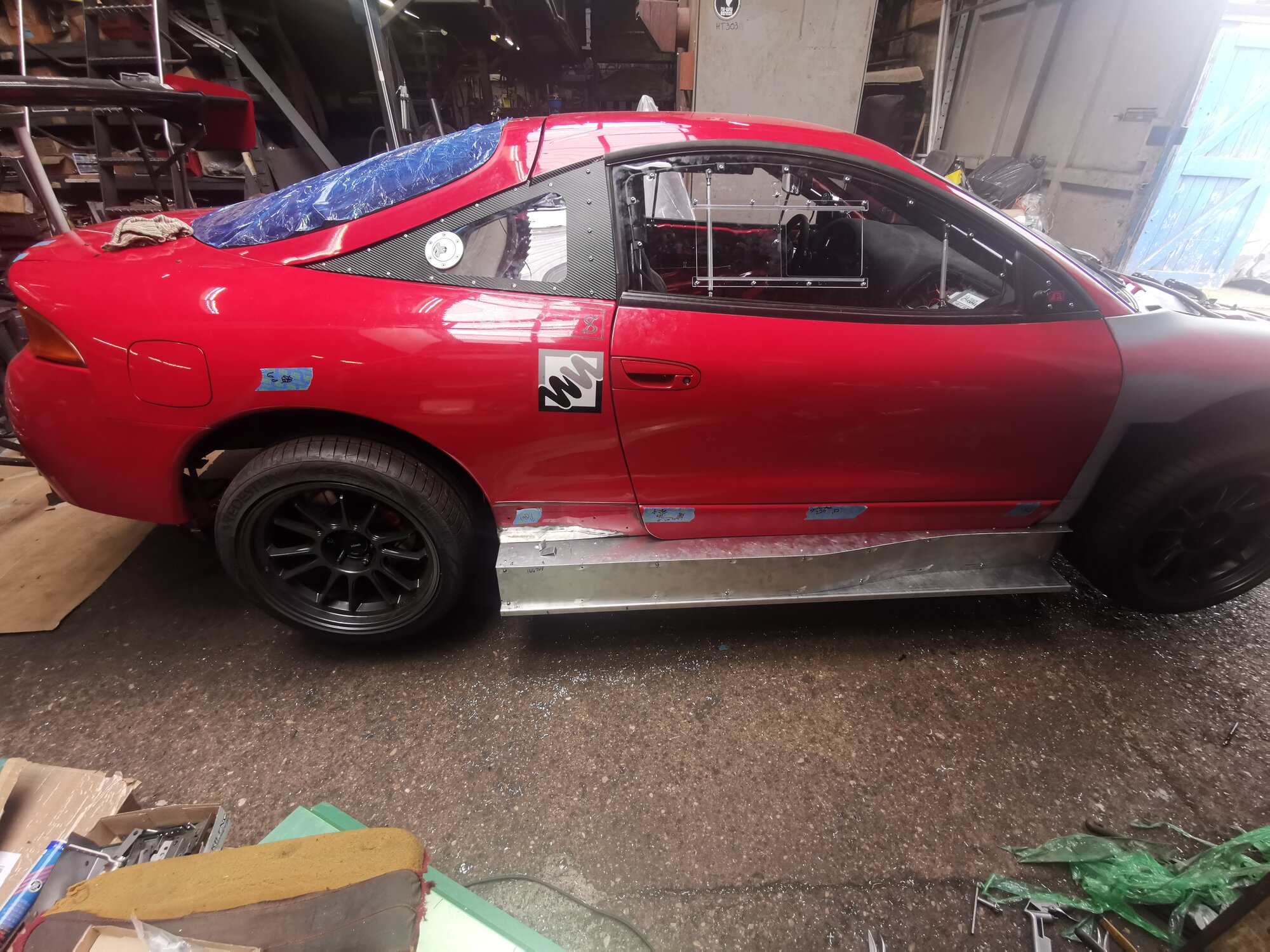 After the sides were done I moved onto the front wings and arches!, previously I had modified some other fenders and welded the wheel coverings on but I ended up not liking this plus I cut them and it raised the arch too much for me. im lowered but not a huge amount. So this time I simply attached the fender cover onto the factory arch in location and this is fine for me and my suspension setup and done not foul plus looks better not being higher up. This is also cut to fold inwards to help push the air from inside the well outwards. Later I need to panel the insides to help stop air from getting trapped in behind the fender now its plastic panels are now removed. Then I got onto the wheel air extraction part and I choose a design based on a few pics I found while searching the web and while you can make some fancy parts here I opted for a simplified version but with the option to later add inserts to deflect more. ( I likely will need to anyway since my rules state your not allowed a full tire to be seen above a certain height and that's for stones flicking out ) so I got some plans for this later on. I had the side skirt tie into this for support and also flow from under the car into the extractors and out. but the end result was nice and I really love the flow of this and was a proud moment once I did this stage! 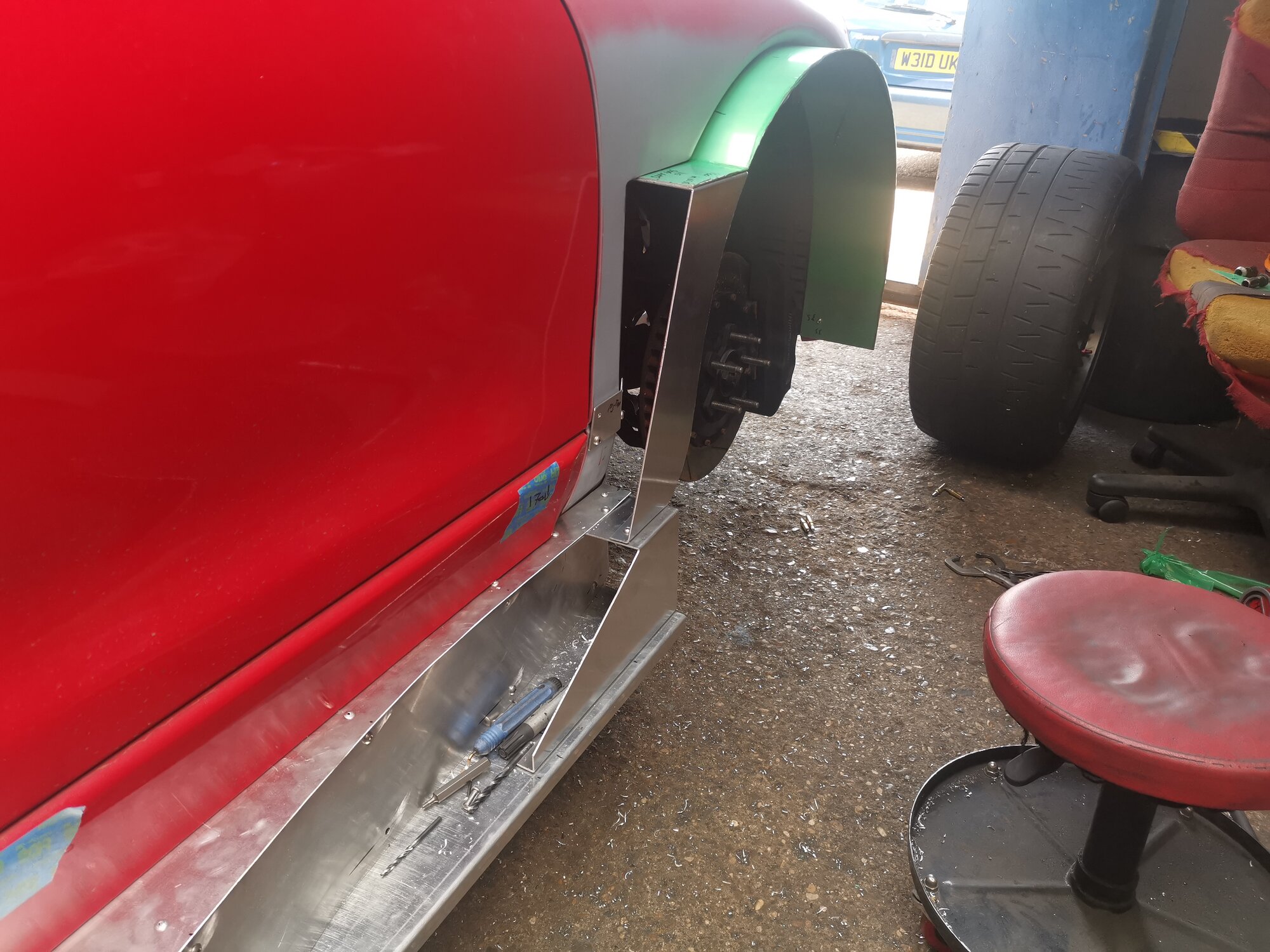 The rear arches were last and fairly simple, they mounted to the skirts and then tapered out at the rear to take away the sharp edges. 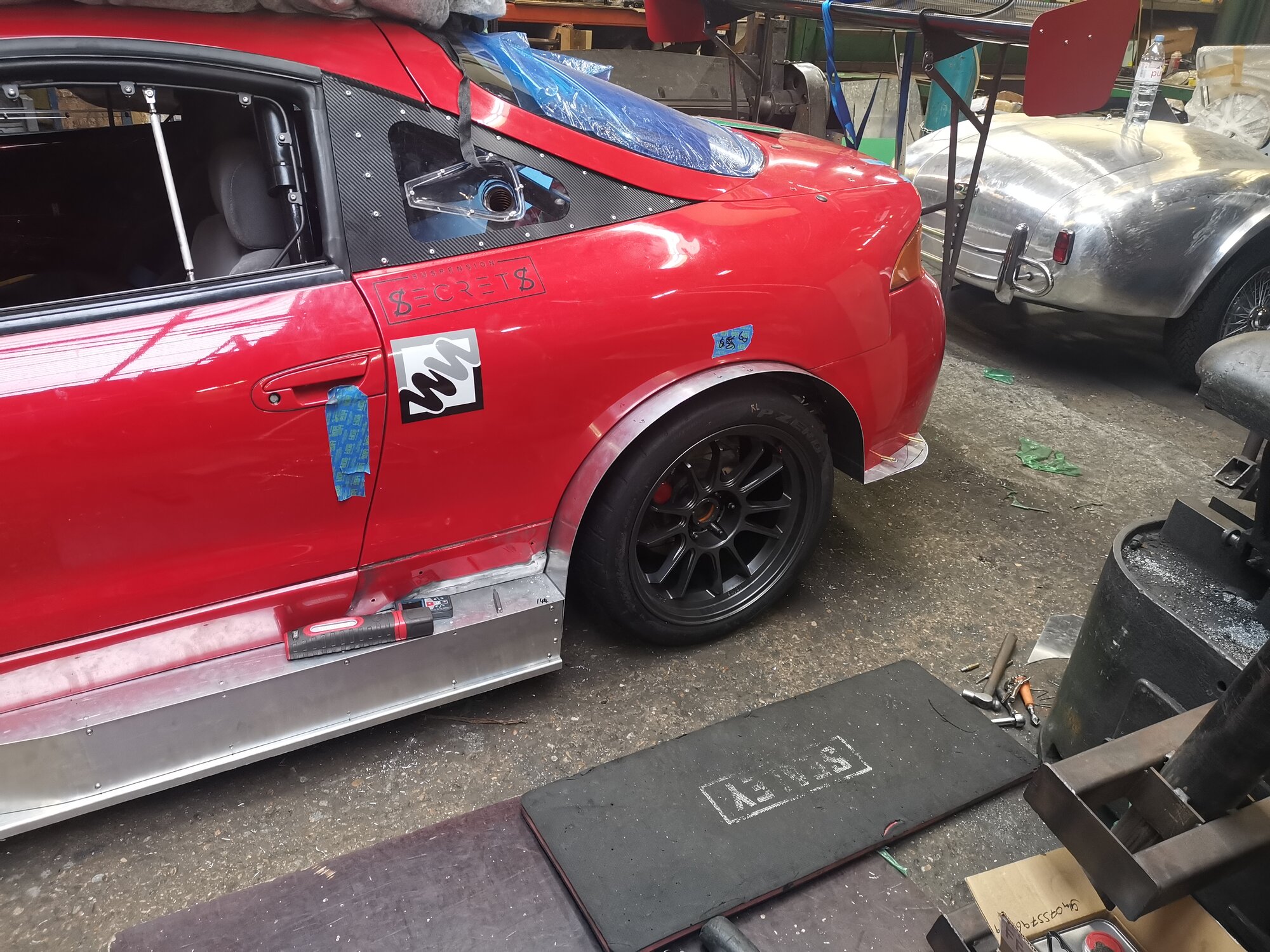 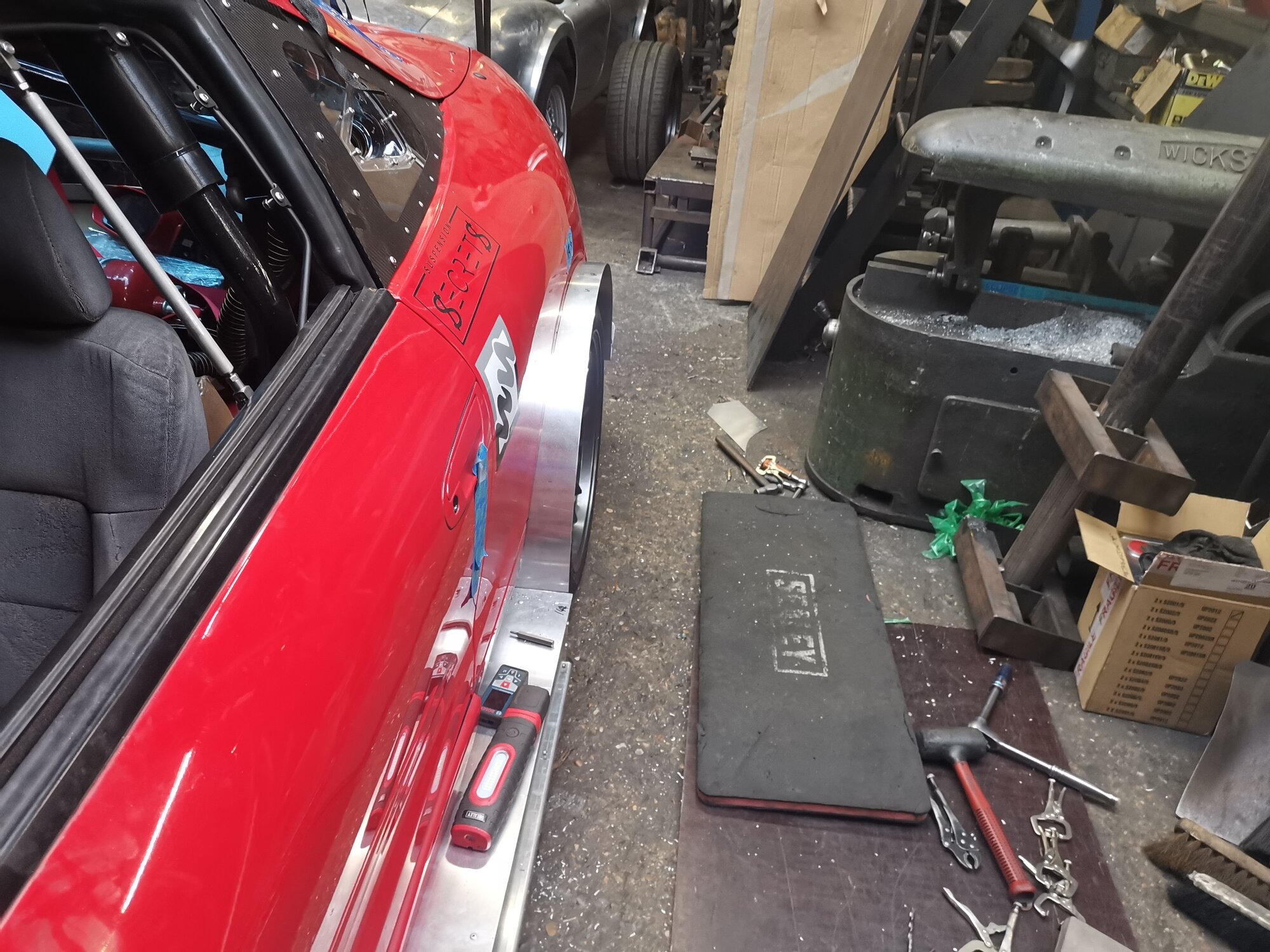 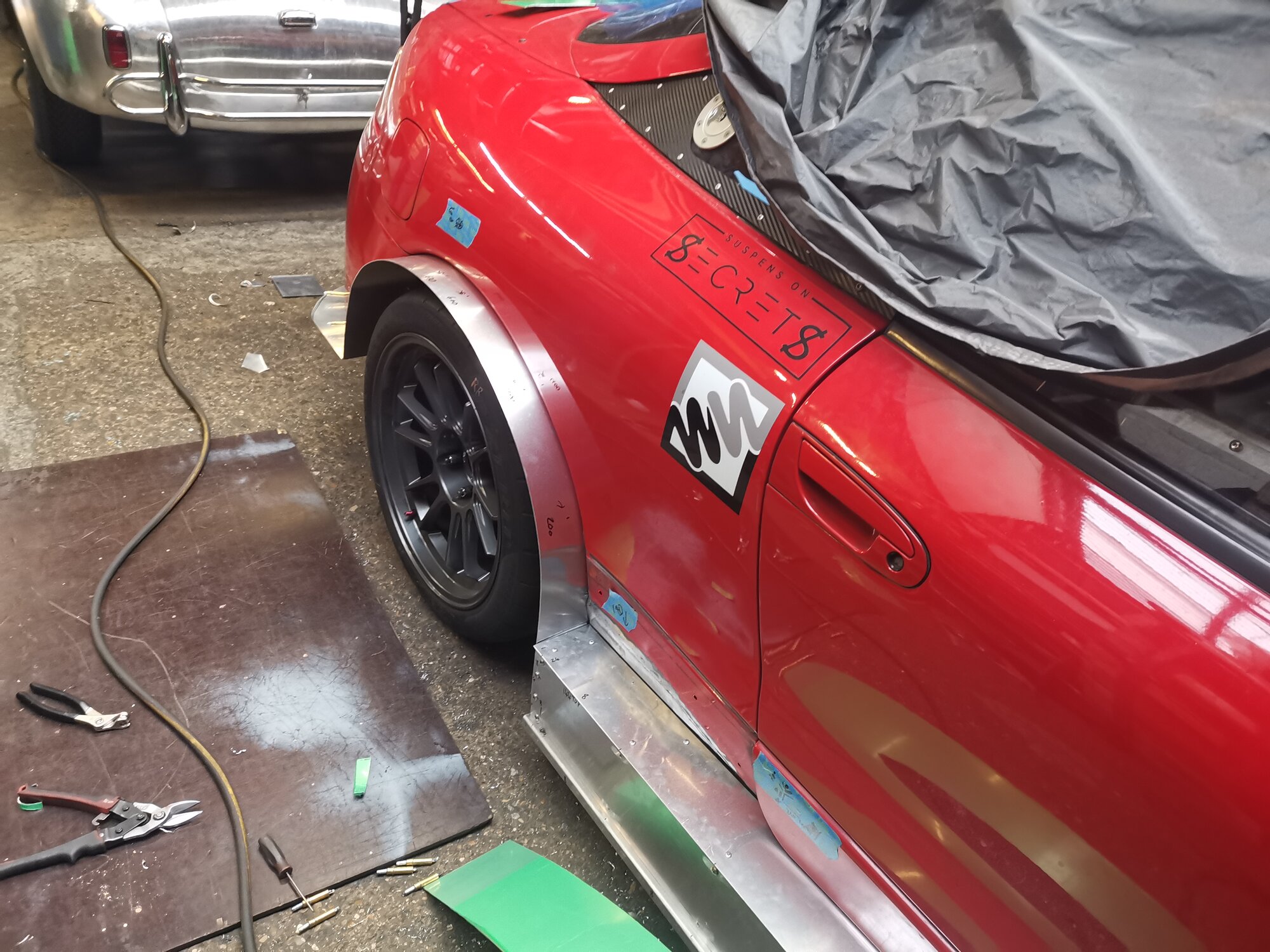 once all this was made it was all removed and prepped for painting, the under side got a heavy duty stone chip paint as per the rest or the chassis did in the same product so stop the alloy wearing and also corrosion resistance.
the top sides got a nice pre sand, etch primer to eat into the alloy and prevent paint lifting and then finally clear coat in gloss and this was because the wrap likes a gloss surface vs dull very matte surface.

It got wrapped and then sat in the garage for a while till the car came home and got finished enough to install the parts at once. 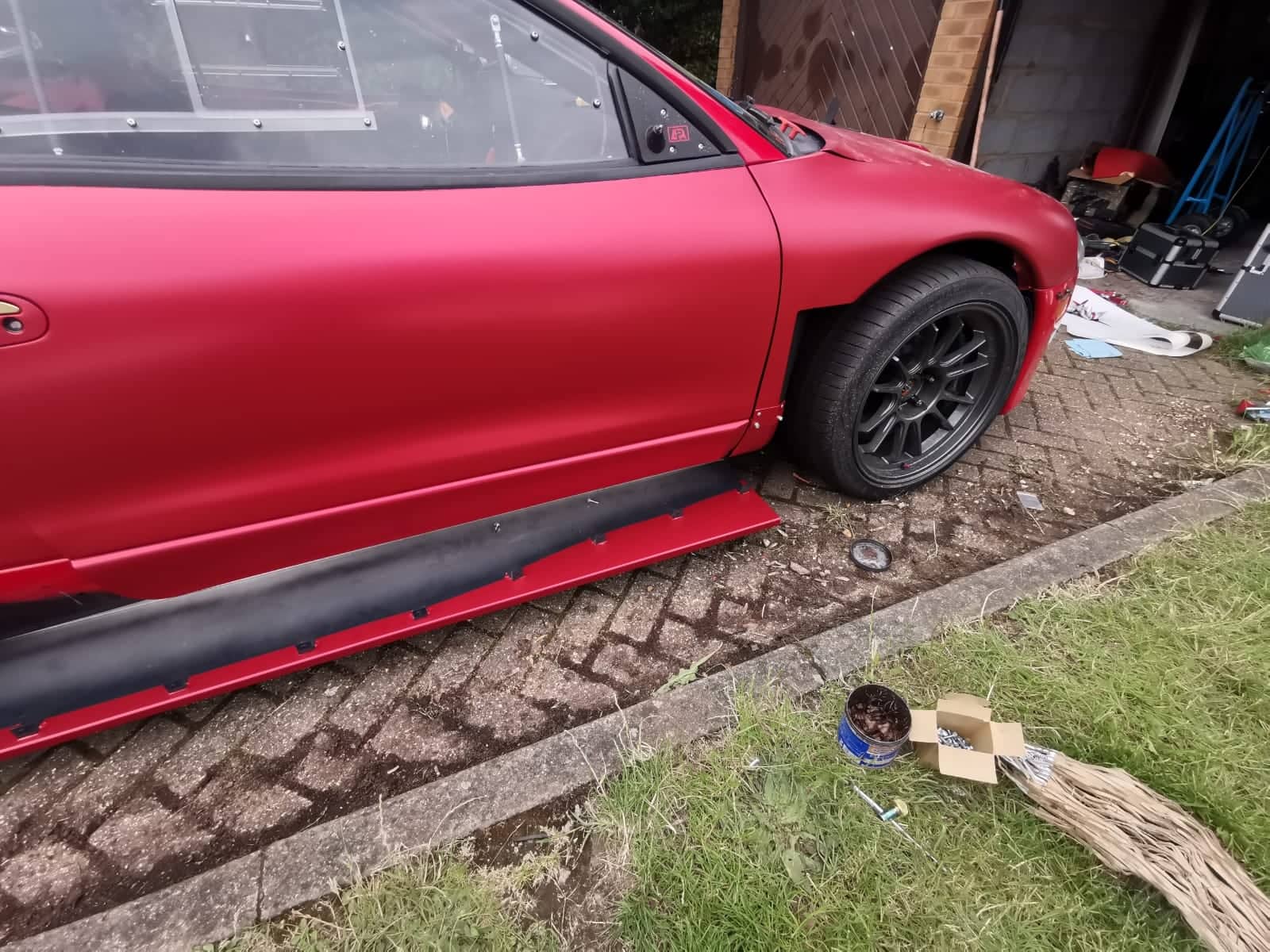 This part of the journey was LONG but was a crucial part of the end result progress. I was told a few times I should get the AMBV2 kit and while I could of saved up for it I actually wanted to take this task on to stand out and be totally different to what I think is ANY other 2G DSM out there currently for racing.

Thanks for reading this post and if you got any questions about specifics then please ask and I can hopefully remember it all to shed some light on it. 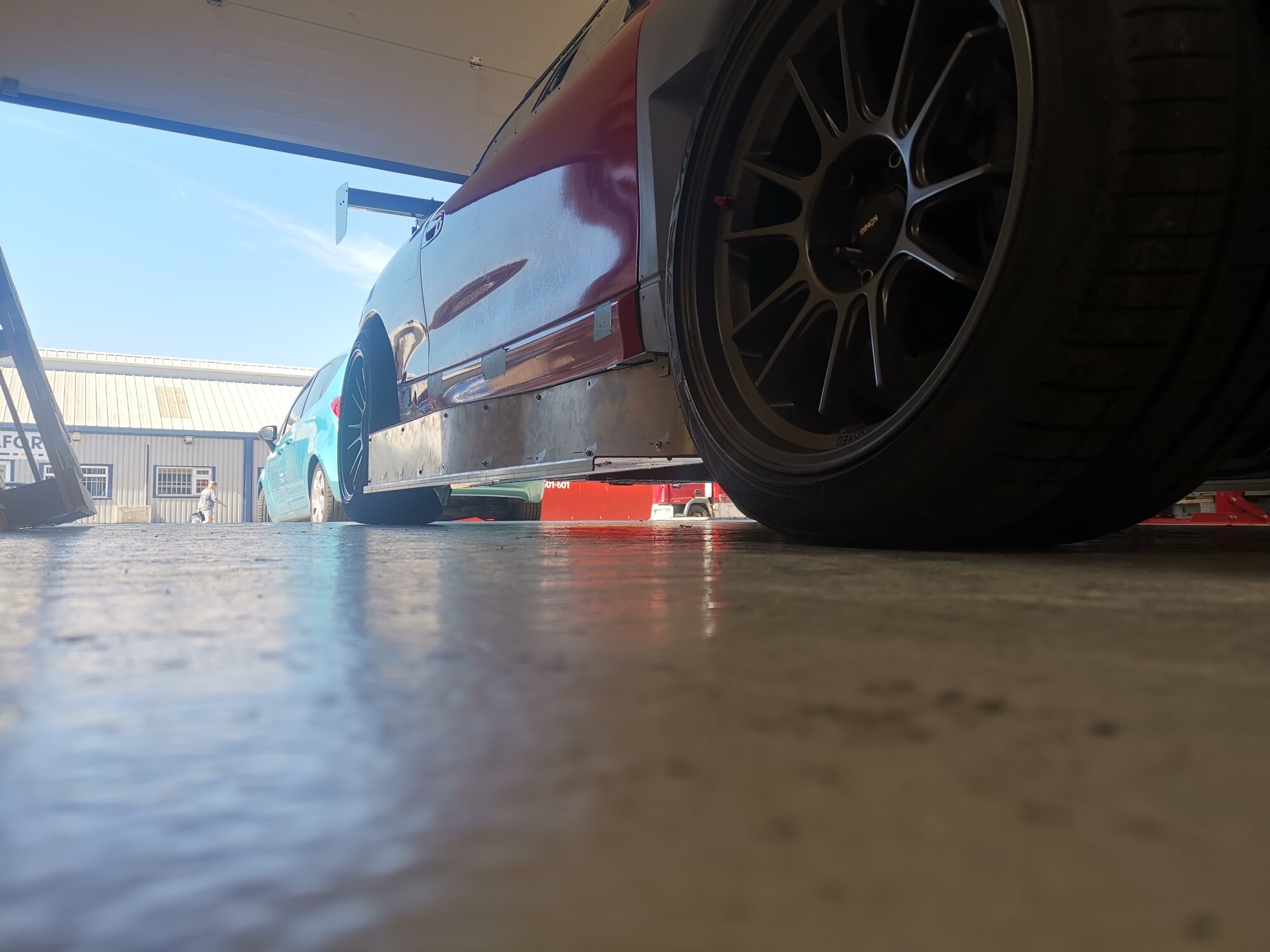 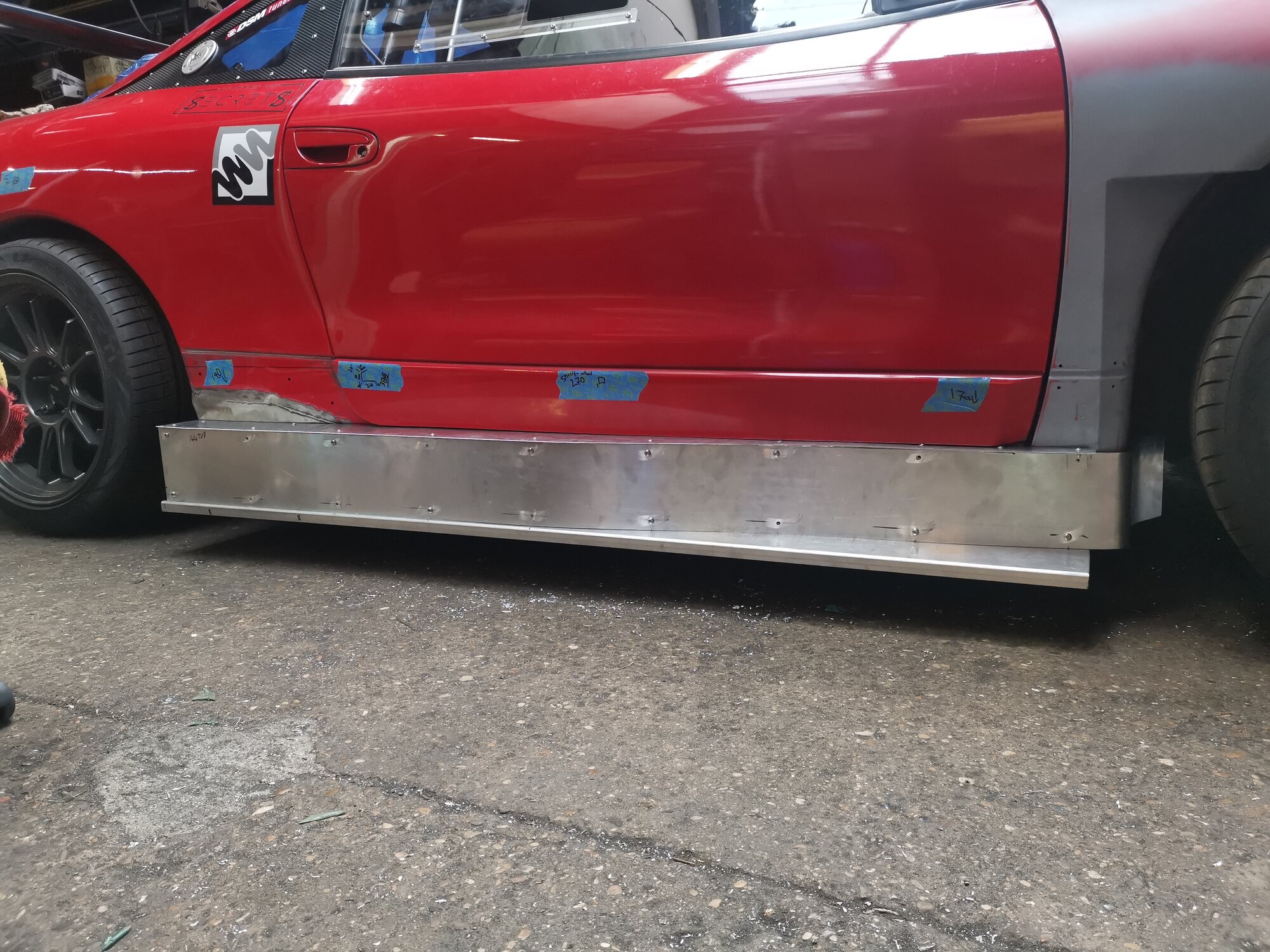 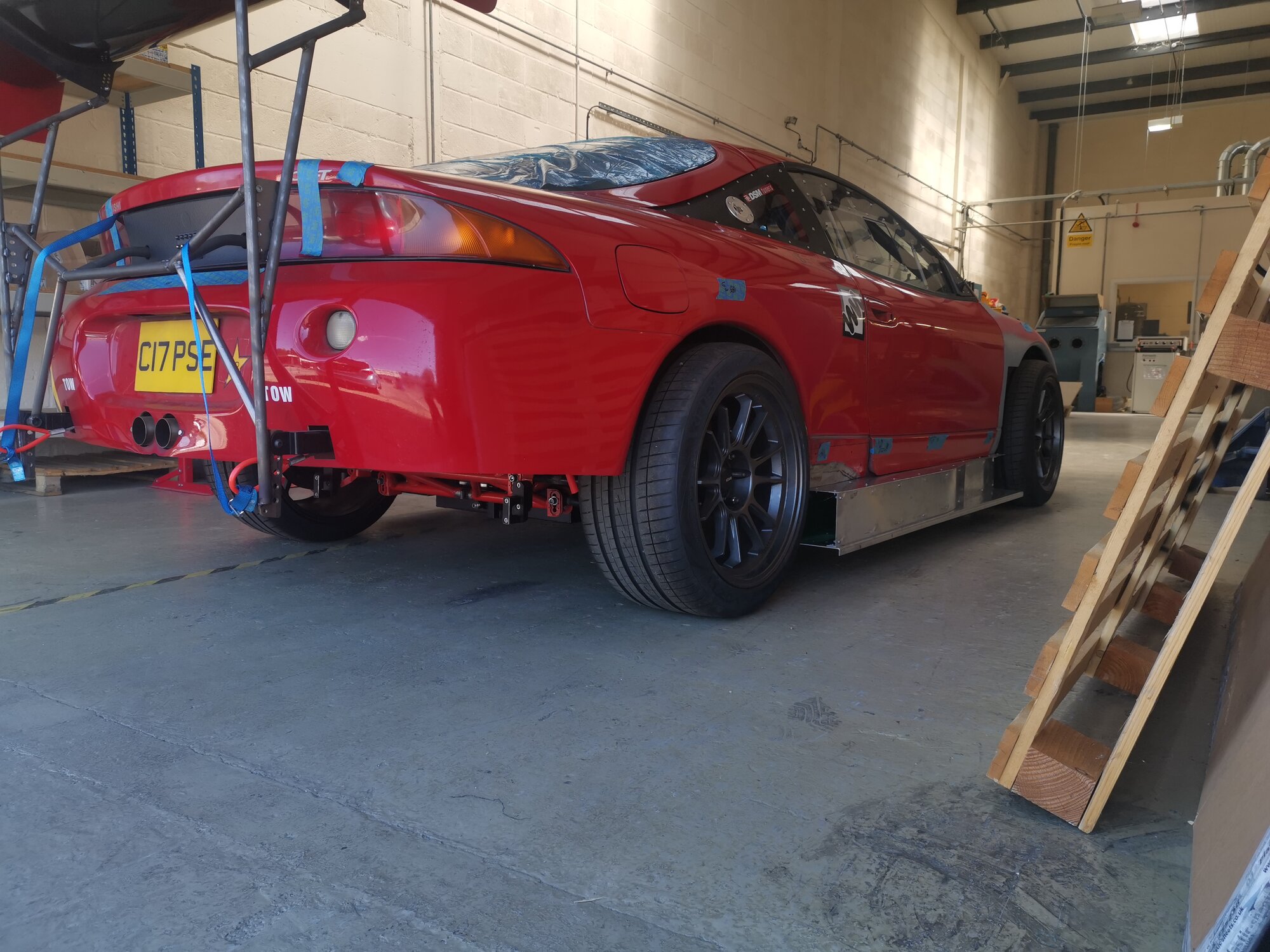 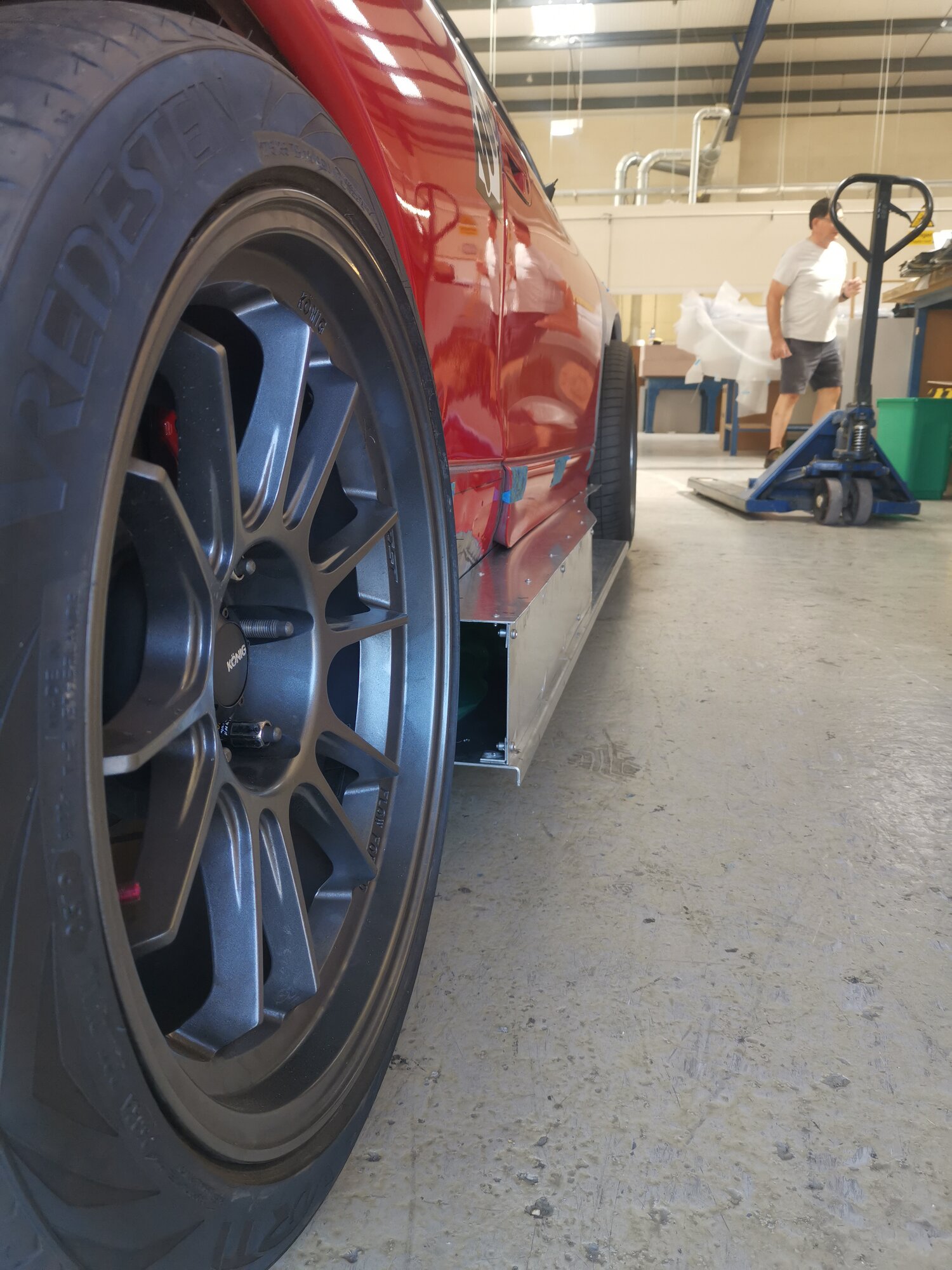 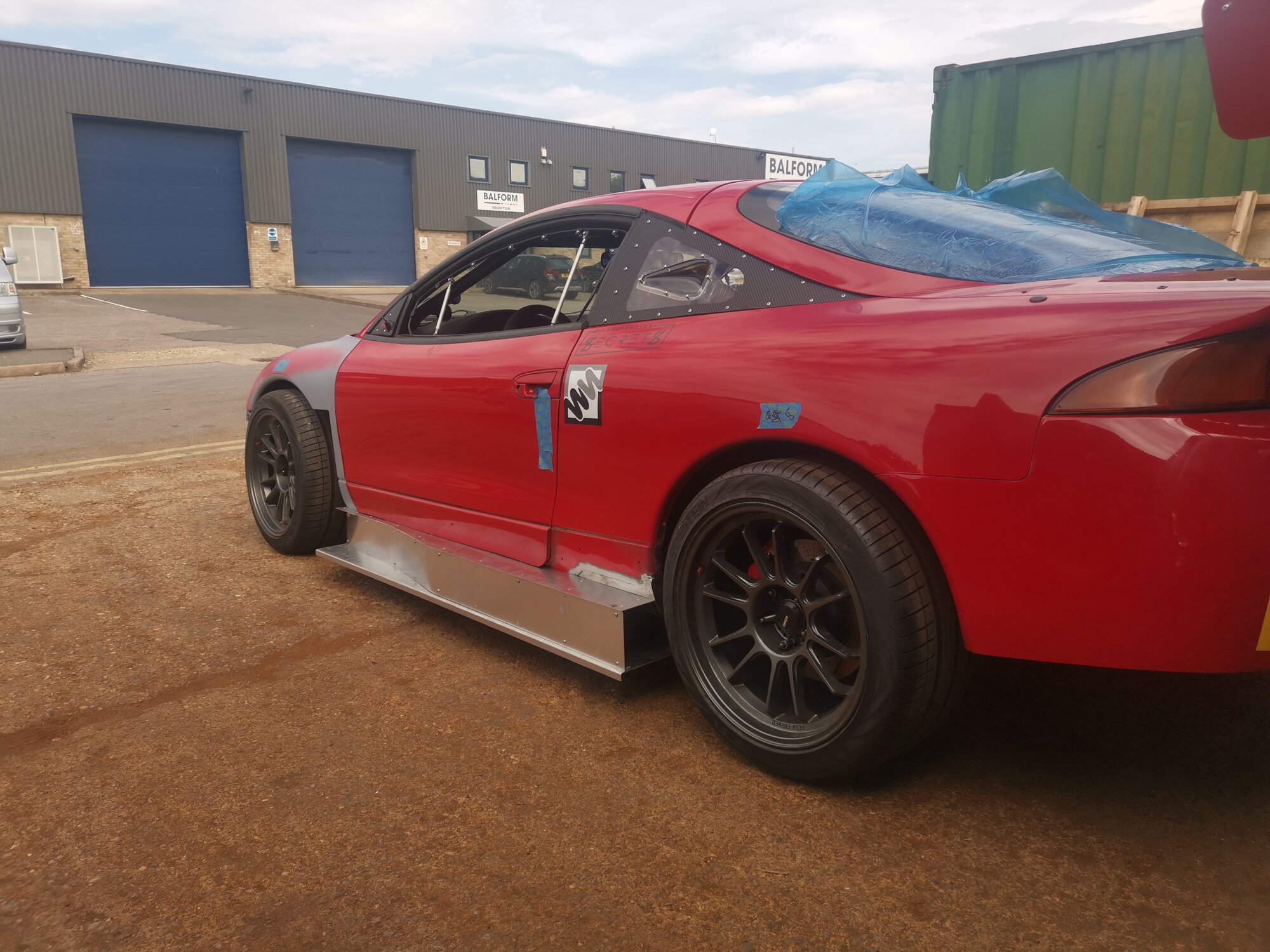 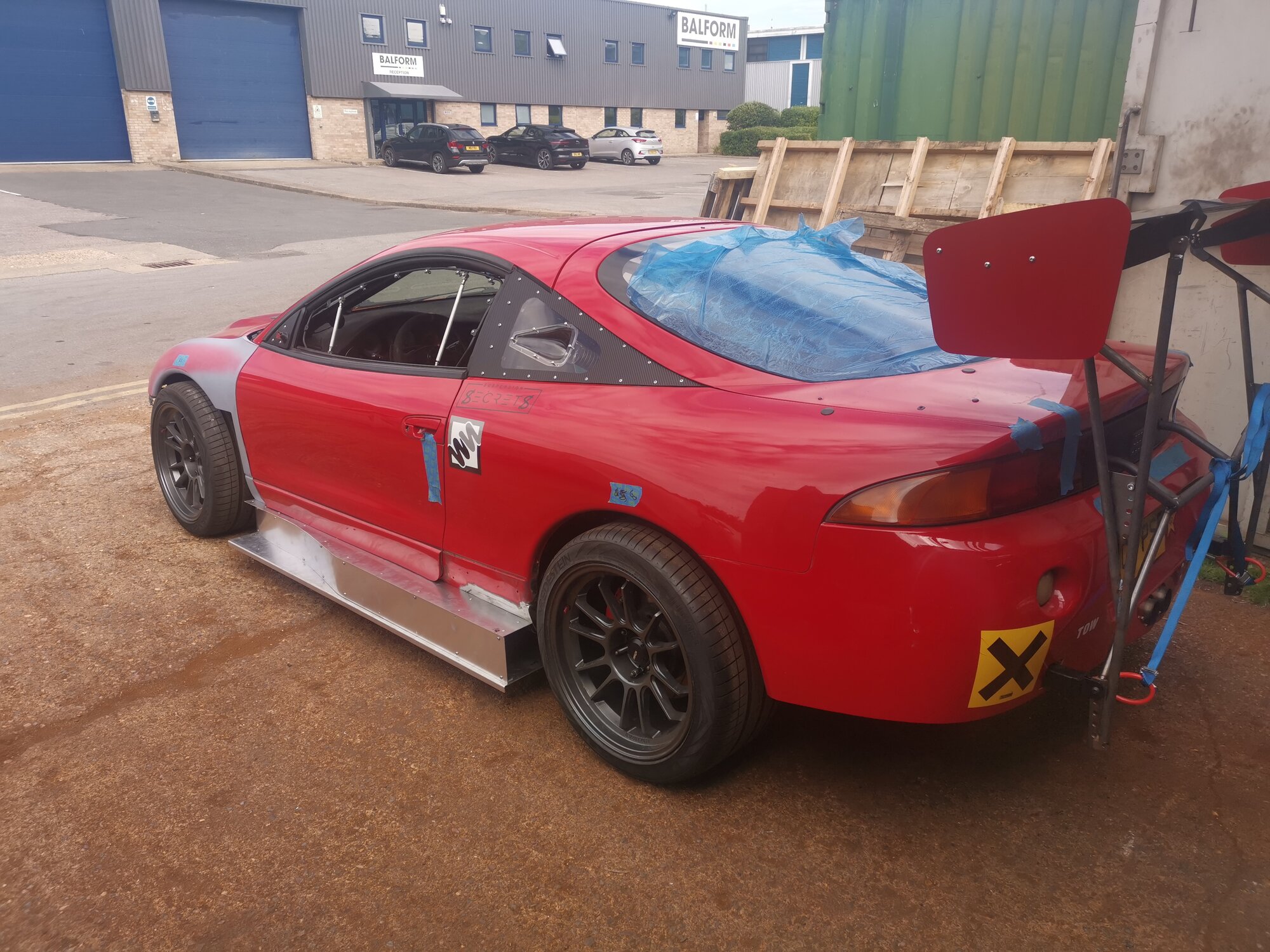 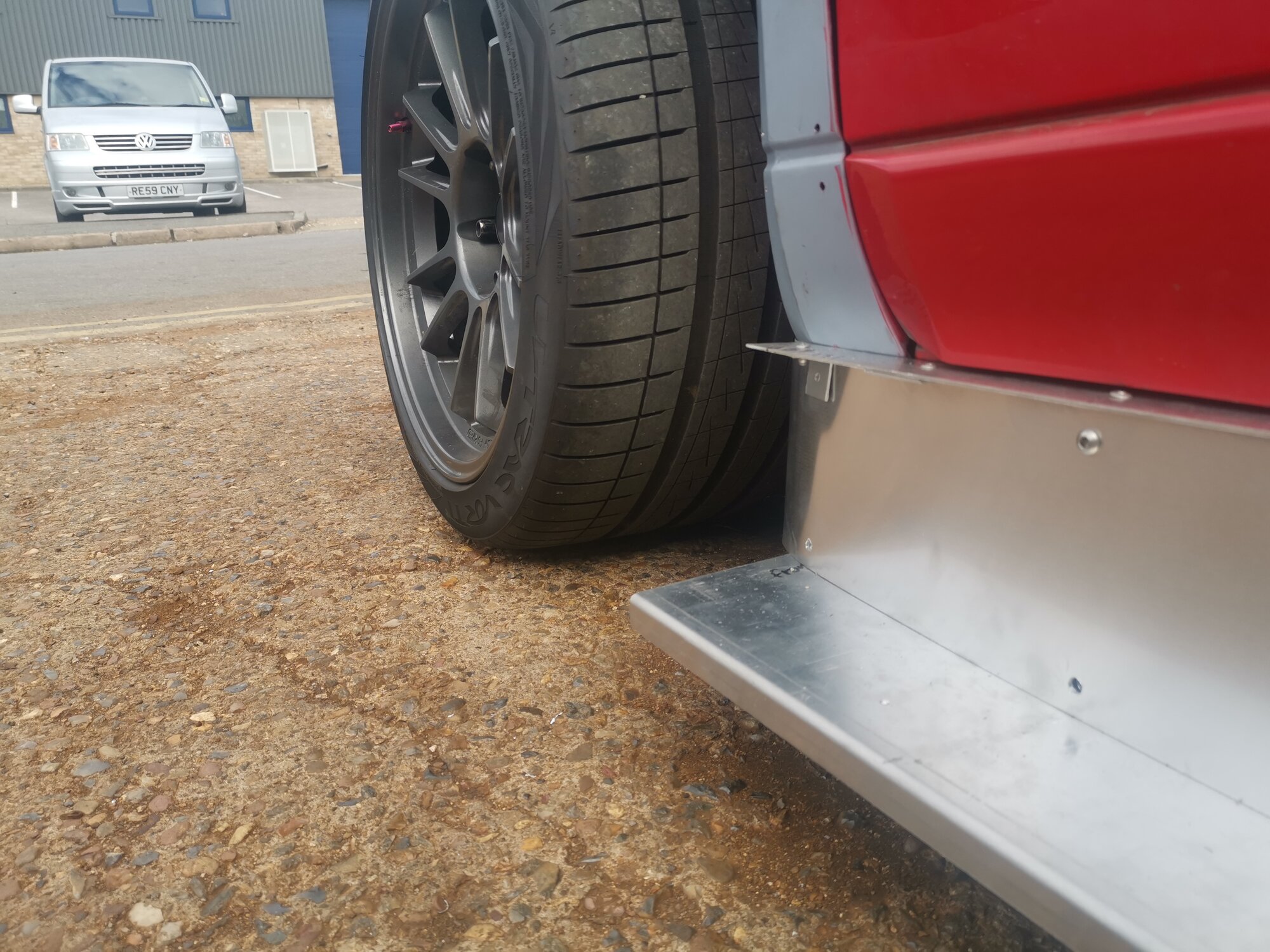 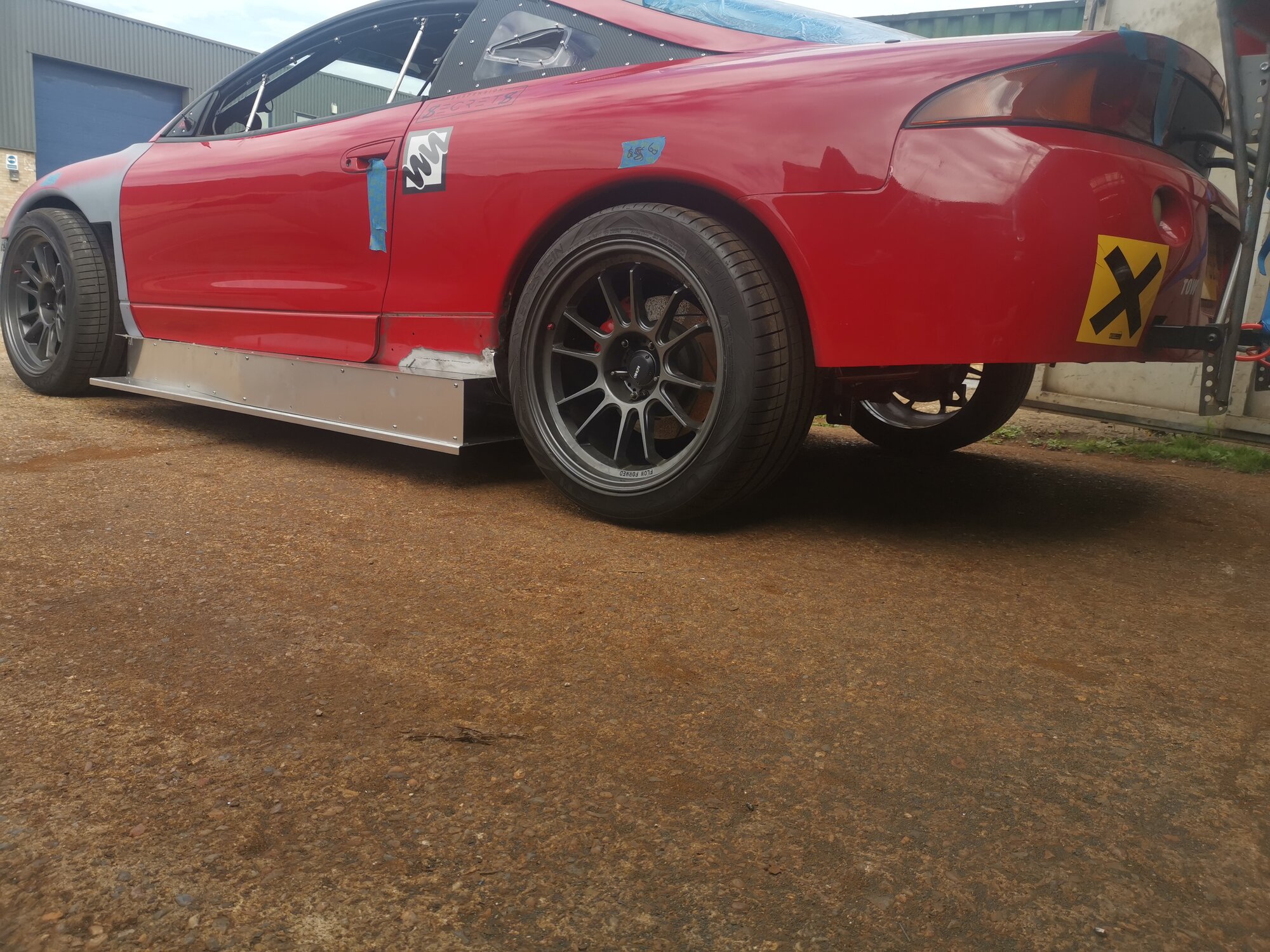 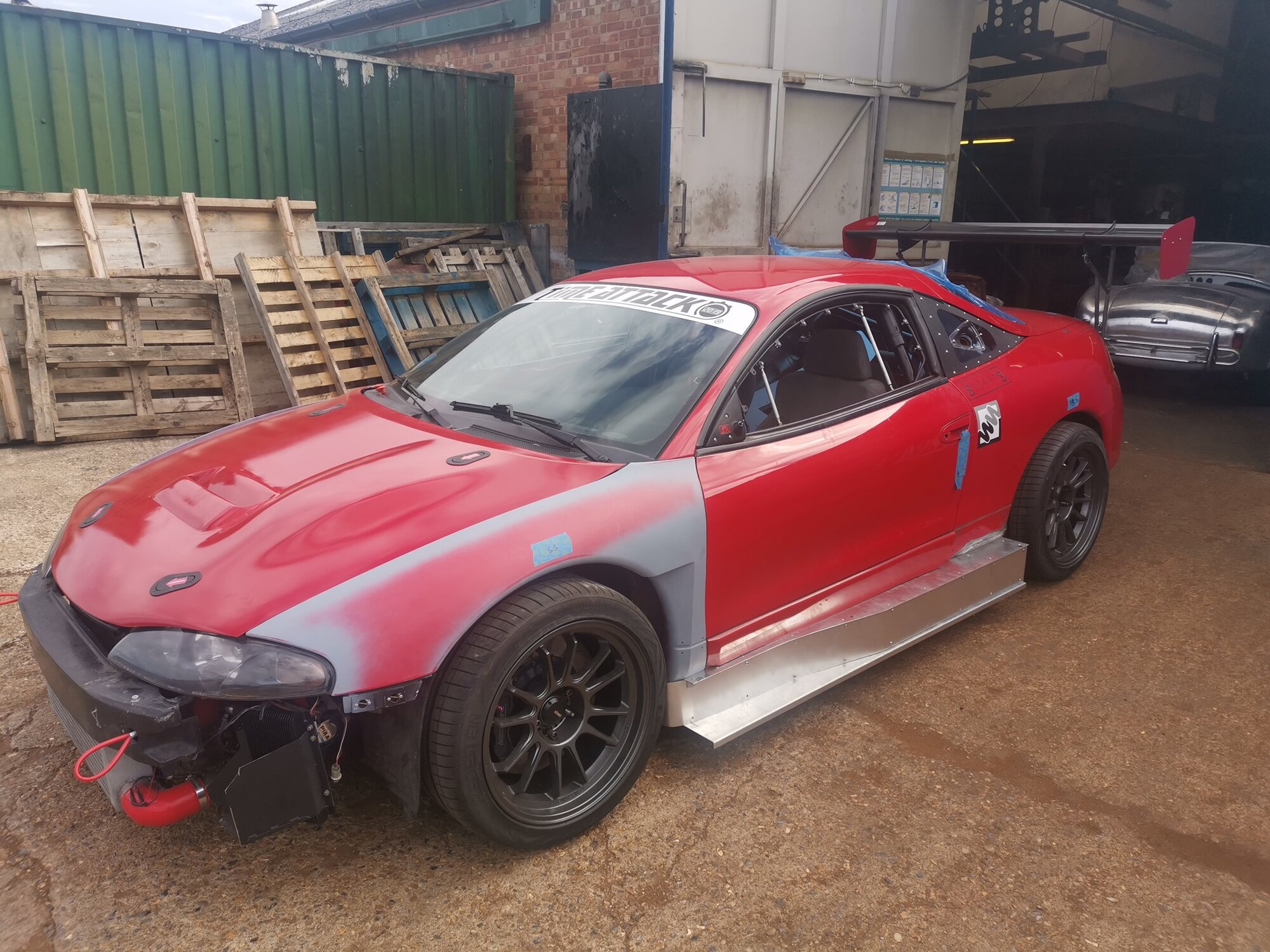 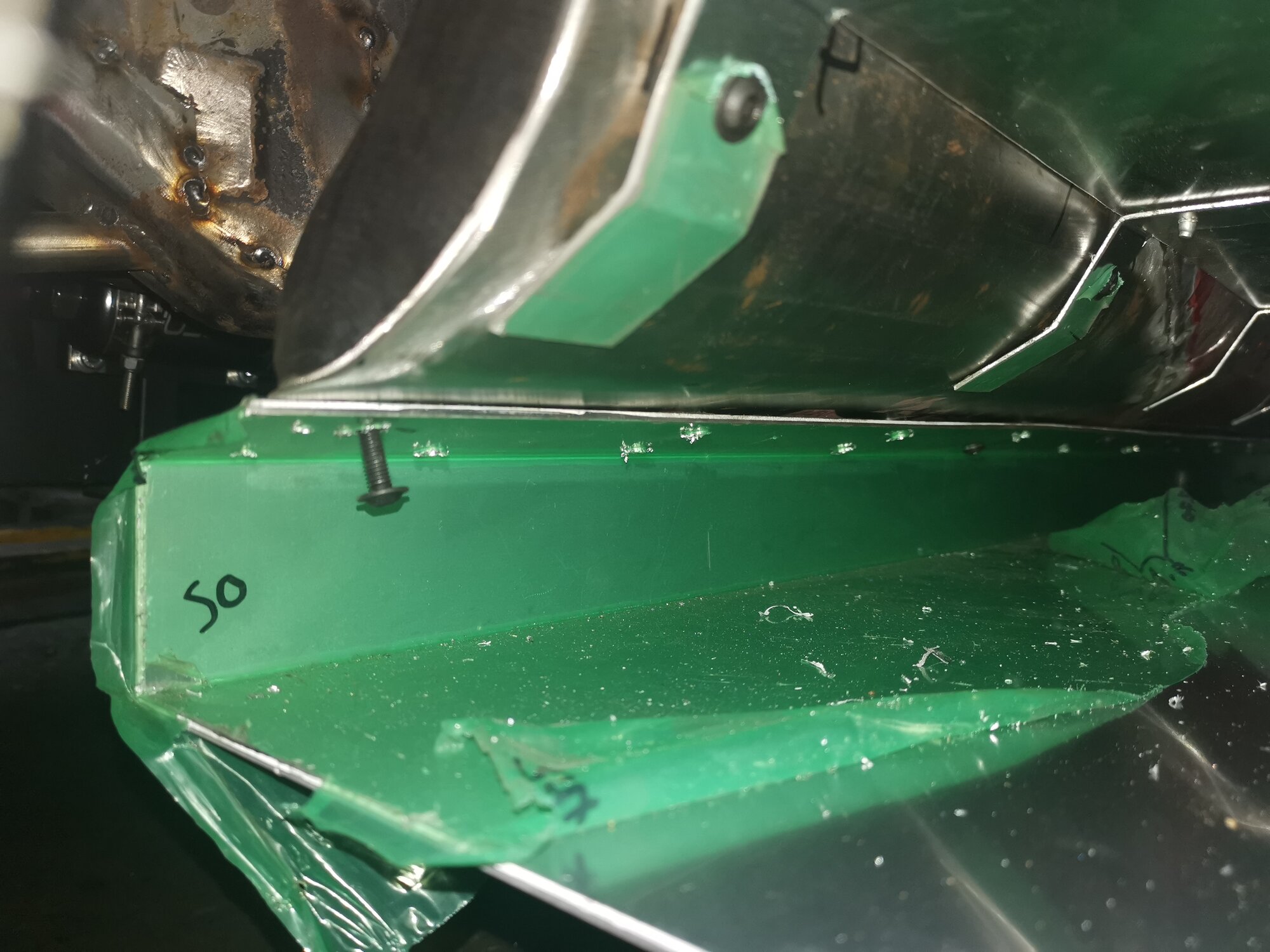 This thing is badass. Need some videos of it turning laps
You must log in or register to reply here.