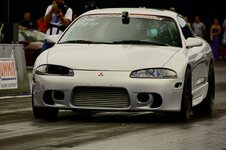 779AWHP at 41psi on a partial dyno run - Tim Zimmer - Twicks69
Here's a short vid of my Eclipse on the dyno with the new engine for 2009 running a 7-bolt stroker with aluminum rods and custom pistons on a Borg Warner S400SX 74mm turbo with a 1.1 A/R divided T4 housing.

The dyno pull was cut short at 6400rpm due to maxing out the twin fuel pumps and 1350cc fuel injectors.

More to come next year!

Tim Zimmer - September 2009 Import Wars Racing on new setup
Here's some videos from the first track passes with the new turbo/engine setup for 2009 doing some test/tuning passes and competing in Quick 16 class.

Timing was at 4-6 degrees on a very conservative tune to get a feel for the car and make sure everything was functioning properly.

First time to the track since 2007, so I needed to clear out the cobwebs and I need to get better with the driver mod. Only 1.5-second 60's for the day, and several bogs/mis-shifts. Again, Driver Mod....

30psi on extremely conservative tune with 4-degrees of timing on Q16.

This was a shakedown pass to see how the car felt after being on jackstands for a year. As you can see, it did pretty decent!

Five 10-second passes back to back on 30psi on safe tune. Highest MPH of the day was 144mph.

The transmission took a hard mis-shift at the prior race causing shifting issues this time out. Oh well, transmission is refreshed and ready to go for 2010! I will also work out the bogging issue off the launch, as it really hindered the ET's for the day due to poor 60-foots all day long.